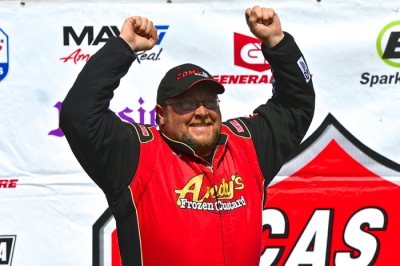 But in Sunday afternoon's 21st running of the event where Late Models run roofless, everything fell into place for Missouri’s winningest special-event dirt racer over the past 25 years. | Video | Prelims | Slideshow

“I’ve run second a time or two, and some thirds, led it with two to go and had a flat one time,” Phillips said. “I’m just glad it all came together for me.”

Driving the familiar No.75, the same number his Hall of Fame father Larry Phillips ran for so many years, Phillips charged from third to first following a lap-78 restart and led the rest of the way for a career-high $40,000 payday and his first career Lucas Oil Late Model Dirt Series.

The seventh-starting Phillips squeezed under series points leader Jimmy Owens of Newport, Tenn., between turns one and two, making slight contact in going past before racing to the checkers in an event postponed Saturday because of rain.

"The car got good traction on that restart, and once I get in clean air by myself, I guess I had a pretty big lead and didn’t know it,” Phillips said of leading in the late stages. “I was looking for (a crew member’s signals), but I was trying to concentrate. I got to thinking about the scoreboard needing some bulbs, and I realized I probably needed to pay attention to what I'm doing. I got excited there at the end, but caught the lapped traffic and the flagman did a good job trying to get 'em out of the way.

“When it’s one-laned, no one wants to give up their spots, and when I’d catch 'em, it’d slow me down so much because I couldn’t turn ... it was hard to pass, so I just tried to stay calm and be one of these elderly smart guys in the car. That’s what I tried to do.”

The third-starting Owens settled for second after leading laps 31 through 78 while outside front-row starter Dale McDowell of Chickamauga, Ga., finished third for the second straight weekend in a Lucas Oil-sanctioned crown jewel event. Chris Madden of Gray Court, S.C., advanced five positions to finish fourth while 11th-starting Earl Pearson Jr. of Jacksonville, Fla., rounded out the top five in a 56-minute race.

The payday, his biggest since his $33,000 Show-Me 100 victory 14 years ago in West Plains, Mo., triggered a victory lane celebration that saw Phillips emerge from his car and repeatedly raise his fists high over his head. The victory for the six-time MARS DIRTcar Series champion heralded the region’s strong competition.

“It’s big. We’ve struggled this year. ... I mean, it’s been a fair year, but no wins. Just top-fives, but trying to get over the hump, you know. It’s big to get it done,” Phillips said, reeling off other strong national performances from regional standouts like Tony Jackson Jr., Ryan Gustin and Jesse Stovall. “We’ve got good cars. I feel just as good as (Lucas Oil Series drivers), they’ve just got more of 'em. But it’s good to beat all of 'em, all the good ones.”

Phillips first broke into the top five on lap 12 before falling back to sixth on lap 30 and dropping to seventh around the midway point. But Phillips charged forward through the second half of the race, taking fifth from Madden on lap 65. He took third from Billy Moyer on lap 68 and used the lap-78 restart to get by McDowell for second before slicing under Owens a lap later.

Phillips said his car slid up a bit in trying to slip by.

“I tried to get it stopped, but it slid up a little — we just barely touched,” Phillips said. “Plus, we’re both trying to race through that rubber streak down the back straightaway. I’d run in there hard going to try to get into second, and all of the sudden I was beside him. It surprised me, too.”

Owens, the 2009 Topless 100 winner, thought his car was good enough to hang onto the lead and win the race for the second time.

“I was guess I was just setting too slow of a pace. The car was really, really good. I didn’t know what shape my tire were in, I didn’t know what shape his tires were in. A car had laid a little bit of (oil) down there in one ... so he was able to charge the bottom of (turn) one a whole lot harder, a lane lower than what I was running. And I did not know that.

“Once he got by, I still just let him go, because, I mean, I just, you know, I thought, 'Well, we need to finish. He’ll probably blow his tire off.' People were having flats. I didn’t know they were cutting 'em down. I thought they blowing 'em out. So you’re kind of danged if you do, danged it you don’t. But we had an awesome car ... it was a really good car. Just things didn’t go out way.”

Running out front, Owens wasn’t certain he was running the fastest line during a 100-lapper where multiple grooves proved effective.

“Earlier we were running high and kind of diamonding it off (the corners), and coming down. Then Dale (McDowell) could get a run under me when I was doing that, and I thought, 'Well, I need to move down to keep Dale from running under me.' When I moved down, he never could get that run, but it seemed like I could hear him. So I just kept on.

“Like I said, Terry just got a good run in that rubber. He just gassed it and ran it a lot harder and we were just a lane up to give him room to get through there. That’s just part of it. Good job to him, I’m glad to come home second. It could’ve been worse.”

Phillips quickly stretched his lead after getting out front before heavy traffic in the closing laps allowed Owens to close the gap. Owens pulled to Phillips’ back bumper by the two-to-go mark, but his low-side challenge on the final lap came up empty as Phillips held on for the victory.

“I didn’t know what to do,” said Phillips, who was pinned behind slower cars through the final laps. “I didn’t want to take a chance on tearing anything up and bumping the (lapped car). It was really just one-laned there at the end, so I just took a chance and stayed in it and tried to finish at the end.”

Owens was awaiting a mistake that might allow him to regain the lead.

“I thought maybe if he slips up, but he couldn’t even pass the last-place cars there, so I knew he’d have to slip up or whatever, or at least give me a half a lane,” he said.

McDowell ended up third, but he thought the outcome might’ve been different if he could’ve found a way past Owens before Phillips did.

“It’s a little disappointing. We felt like in the midpart of the race, I felt like we had a really good car and just couldn’t get by Jimmy. He was right where we needed to be. So I could make a run at him, but never could do nothing.”

When McDowell chose the outside lane for a double-wide restart, that opened the door for Phillips to make his winning move down low.

“He just kind of muscled his way up through there,” McDowell said.

Lap 79: Phillips charges to the lead and starts to pull away after using contact to get by Owens.

Lap 78: Phillips takes second from McDowell on the restart.

Lap 77: Another flat tire, this time for Wendell Wallace, bring outs the caution. Owens leads McDowell, Phillips, Madden and Pearson up front, while Scott Bloomquist has climbed back to ninth.

Lap 66: Championship contender John Blankenship slows back in the pack with a flat tire to bring out the fifth caution. Phillips took fifth from Madden during the green-flag run.

Lap 55: Moyer takes third from Marlar as McDowell keeps pace with Owens for the lead.

Lap 48: McDowell takes second from Marlar as the race goes back green.

Lap 31: Jimmy Owens uses a back straightaway pass to move ahead of race-long leader Mike Marlar.

Lap 12: Jared Landers slowed back in the pack to draw the race's second yellow flag. Owens has taken second back from McDowell, while seventh-starting Terry Phillips has shuffled Stovall out of the top five.

Lap 5: McDowell takes the second spot from Owens as the top three break away from fourth-running Scott Bloomquist.

Lap 2: Fast time provisional starter Stacy Taylor heads to the pits. Taylor started the race in Kenneth Jackson's car after his own was damaged in a consolation race wreck.

Lap 1: The green flag waved at 2:05 p.m. with polesitter Mike Marlar grabbing the lead over Jimmy Owens and Dale McDowell. Brian Shirley never made it out for the race, giving up the 11th starting spot.

The 10-minute call for main event cars to lineup was given at 1:40 p.m., shortly after hot laps for the 18 locked-in cars.

Topless 100 first-timer Eddie Carrier Jr. will use a Lucas Oil Series provisional to start the feature from the 25th spot, while Stacy Taylor will use the fast time provisional to round out the 26-car starting field. Taylor will run Kenneth Jackson's No. 117 car after his own car was damaged in a lap-one wreck in the second consolation race.

Second-starting David Breazeale led all 15 laps of the final consolation race, holding off a late challenge from fifth-starting Jared Landers to earn his first-ever Topless 100 main event start. Landers, the 2010 Topless 100 winner, settled for second to make the feature lineup without having to use a Lucas Oil Series provisional. He took the final transfer spot from Tommy Weder shortly after a lap-four restart, but couldn't find a way around Breazeale in the green-flag run to the finish. The lap-four caution was the race's only yellow flag, appearing for debris. Third-starting Timothy Culp pulled off the track on lap eight.

Outside polesitter Steve Francis led every lap of the second 15-lap consy, cruising to the victory and a main event starting spot. Brandon Smith held off a late charge from seventh-starting Justin Asplin to claim the race's other transfer spot. Polesitter Stacy Taylor and third-starting Gary Christian got together in turn four on the first lap after a failed slidejob attempt by Christian. The accident ended Taylor's run and sent Christian to the hot pit under the ensuing caution. A lap-three caution appeared when third-running Gavin Landers got into the turn-two wall. Jay Brunson joined Landers in retiring from the race under the yellow.

Using a turn-four slidejob to grab the lead with two laps remaining, fifth-starting Don O'Neal outdueled Robbie Stuart in claiming the first of three 15-lap consolation races. The fourth-starting Stuart settled for second and will join O'Neal in transferring to the main event. Polesitter Robert Baker missed a feature transfer in finishing more than a straightaway back in the third spot. A complete restart was needed after Michael Asberry spun in turn one and collected A.J. Diemel. Asberry got together with polesitter Jack Sullivan on lap two, with Sullivan pulling off the track.

The Topless 100 main event has now been postponed to Sunday in three of the last four years. Jared Landers won on Sunday in 2010 and Scott Bloomquist repeated that feat in 2011. ... The Crop Production Services Non-Qualifiers Dash pays $1,000 to the winner. ... Mike Marlar was the fastest qualifier during Friday’s hot laps and won his heat race to earn the pole for the 100-lap main event. Other heat winners: Dale McDowell, Jimmy Owens, Jesse Stovall, Scott Bloomquist and Tyler Reddick. ... Reddick swapped engines after experience problems during his heat race victory. ... Don O’Neal was fastest in Friday’s qualifying but was disqualified for being 25 pounds light. ... Eric Jacobsen left the event after a heat race wreck with O’Neal Friday night.