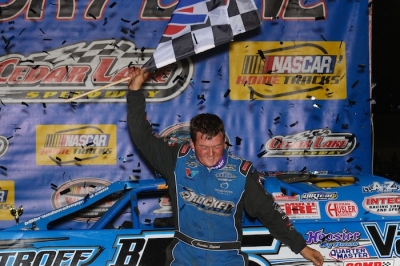 The polesitting Sheppard, who finished a close second in Summernationals action at Cedar Lake six weeks earlier, took the checkers nearly a straightaway ahead of series points leader Josh Richards of Shinnston, W.Va., for a $6,000 payday and his second WoO victory.

Fast qualifier Shannon Babb of Moweaqua, Ill., who lost the second spot to Richards with five laps remaining, was third in a tuneup for the $50,000-to-win event that will be contested Friday and Saturday at the 3/8-mile oval.

In the redraw among heat winners, Brandon Sheppard will start on the pole with Eric Wells starting outside the front row. Don O'Neal and Shannon Babb are on row two while Josh Richards and Morgan Bagley start on the third row. ... Pat Doar, Ronny Lee Hollingsworth and Brian Birkhofer won consolation races to transfer to the 40-lap main event. Provisional starters are Rick Eckert, Chub Frank, Kevin Weaver and Dennis Erb Jr.

Polesitter Brandon Sheppard dominated the final heat race, pulling away by a straightaway margin by halfway and crusing to the redraw for heat winners. Fourth-starting Gregg Satterlee, who grabbed his first WoO victory Tuesday in Shawano, Wis., was a distant second, but he was far ahead of a tight battle for third. Outside front-row starter Kent Robinson held onto that spot despite several challenges from Billy Moyer and Kevin Weaver in the caution-free prelim.

Fourth-starting Morgan Bagley came out on top in a wild first lap, then held off outside front-row starter Tim McCreadie for a victory in the fifth heat. McCreadie was a close second most of the way before dropping back late, securing the second spot with Bobby Pierce in the third and final transfer spot. Polesitter Tim Isenberg led the field into turn three on the first lap, but McCreadie went around on the high side while Bagley went underneath. Contact with McCreadie nearly caused Isenberg to lose control in turn two and he lost several spot. Two-time USA Nationals winner Brian Birkhofer was fourth in the caution-free prelim.

Shannon Babb fought off Jonathan Davenport and became the fourth straight polesitter to win a heat race. Penalized once for jumping the start, Davenport was restored to his outside front-row spot when another driver jumped the next start, and he made the most of it in leading early, but Babb slipped by mid-race after a tight battle. Devin Moran — the other driver penalized — got a third-place finish to transfer to the feature in his first-ever Cedar Lake visit. Dennis Erb Jr. retired from the race slowed only by the two failed starts. Davenport's car showed smoke midway through the race, but it wasn't clear if his powerplant suffered any damage.

Plesitter Don O'Neal emerged from a first-lap, three-wide battle with Chris Simpson and Jason Feger on the backstretch and stretched away for a 10-lap victory. Simpson hung with O'Neal early before settling for second while Feger had his hands full with Ronny Lee Hollingsworth most of the way. Feger got the third and final transfer spot, widening his margin in the final laps. Andrew McKay pulled off midway through the prelim.

Polesitter and WoO points leader Josh Richards cruised to victory while fifth-starting A.J. Diemel came alive on an early restart for a solid second-place finish. The third spot was in doubt early, but sixth-starting Darrell Lanigan picked up a few spots for the position and secured the final transfer spot ahead of Pat Doar and outside front-row starter Dillon Wood. An early caution appeared when fourth-starting Bub McCool slowed on the second lap; his car refired long enough for him to pull to the pits.

While the battle for second was nearly four-wide on the backstretch of the first lap, polesitter Eric Wells built a big early lead and cruised to a 10-lap victory. Shane Clanton fought off a challenge from fifth-starting Jared Hawkins to secure the second spot, but Dale McDowell stole the position at midway. Clanton got the final transfer spot in third while while Hawkins slipped to fourth at the finish. Outside front-row starter Brian Shirley got too high in turn two on the first lap and never recovered, finishing fifth. Jordan Yaggy, who finished back in the pack, was pushed off the track after the race, which followed more than a half-hour of track prep after a hole developed in turn three during time trials.

Shannon Babb of Moweaqua, Ill., topped 52 qualifiers Thursday at Cedar Lake Speedway for the first of three nights of action at the 26th annual USA Nationals. Babb tripped the clock at 13.237 seconds at the 3/8-mile oval for the World of Outlaws Late Model Series program paying $6,000-to-win.

World of Outlaws Late Model Series points leader Josh Richards of Shinnston, W.Va., is back at Cedar Lake for the first time since winning 2011’s USA Nationals. ... Among the entries are a dozen drivers who received $1,200 in tow money via the track’s Fans Fund program where fans make donations and vote for their favorite drivers. Clay Fisher of De Witt, Ark., and Ross Camponovo of Clarksville, Miss., were top vote-getters in each division. ... Brian Birkhofer is back in action for the first time since breaking a bone in his right hand in a racing accident; he’s wearing a hard cast that stretches from his forearm to his fingers. ... Jimmy Owens of Newport, Tenn., is among drivers in the pits who didn’t unload for the night’s action. ... NASCAR Midwest Modifieds are also in action.