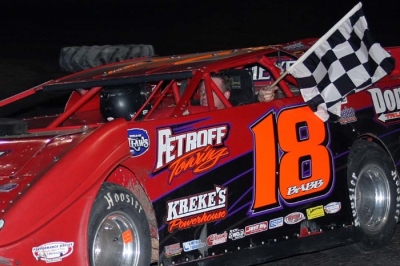 The 39-year-old star from Moweaqua, Ill., thrilled his home-state crowd, outdueling Dale McDowell of Chickamauga, Ga., and Bobby Pierce of Oakwood, Ill., down the stretch to win a 100-lap race that was arguably the most dramatic of the 2013 World of Outlaws Late Model Series campaign. | Video | Slideshow

For a driver who since 2008 has tried so hard — but continually fallen just short — to score a signature WoO triumph in the Illini 100 at nearby Farmer City Raceway, mastering another bullring in his backyard to the tune of a $20,050 first-place check holds extra significance.

“This ranks right up there with the Illini 100 to me,” said Babb, who previously won the Prairie Dirt Classic in 2002 and 2006. “Twenty-grand (to win a Dirt Late Model race) right here in Illinois is unheard of, and I’m just tickled to death (to win it).

After watching the 16-year-old Pierce use the inside groove to march forward from the 17th starting spot and take the lead on lap 29, Babb stuck to his preferred outside line around the high-banked, quarter-mile oval and reached second place on lap 48. Babb then relentlessly chased Pierce for the remainder of the distance, nosing ahead to lead briefly on lap 80 and laps 89-90 before gaining full command on lap 93 and holding off both Pierce and McDowell, 47, over the final circuits.

Babb, Pierce and McDowell ran three-wide at times during the last five laps, igniting the packed house that turned out for the biggest event in Fairbury’s storied history. The trio came off turn two close together on the final lap, but Pierce and McDowell vied for the same real estate in turn three and lost momentum, allowing Babb to vault away to the checkered flag in his Victory Circle car.

McDowell settled for second place in his Team Dillon MasterSbilt machine, 0.730 of a second behind Babb. Pierce registered a career-best WoO finish of third in a car built by his father Bob.

Tim McCreadie of Watertown, N.Y., quietly rallied from a lap-39 pit stop for a left-rear tire change to finish fourth in the Sweeteners Plus Warrior, reaching the position with just four circuits left in the 100. He used a WoO points provisional to start 24th and actually went a lap down early in the race but was reinstated to the lead lap by the tour’s Outlaw Pardon rule when a caution flag flew on lap 39.

Shane Clanton of Zebulon, Ga., placed fifth in the Kennedy Motorsports Capital Race Car after climbing as high as third from the 11th starting spot. He regained second place in the WoO points standings from Darrell Lanigan of Union, Ky., who was never a factor while finishing two laps down in 19th place.

Josh Richards of Shinnston, W.Va., remained atop the WoO points standings with a sixth-place finish after starting 20th.

Babb, who started sixth, worked hard for his 11th career WoO victory but first since Sept. 18, 2010, at Federated Auto Parts Raceway at I-55 in Pevely, Mo.

“It felt like we was in a hornet’s nest the whole race,” said Babb, who ran inside the top five virtually from start to finish. “Nobody got away from everybody. Little Bobby got out there on us a little bit (midway through the PDC) – he was soft on tires and was real slow on the bottom – but the top here is always just as equal as the bottom and we got rolling up there.”

After swapping the lead with Pierce five times from lap 81 to 93, Babb found some extra speed to keep both Pierce and McDowell behind him during the race’s final frenetic laps.

“I tried not to step it up as hard as I could till five (laps) to go,” said Babb. “You get your tires hot (running hard) and then you start shoving the nose, so I was rolling along there about 90 percent. Then when that flagman gave me five to go I stepped it up a little bit and started using the center of the berm to shove me off and get a little bit of a run off the corner.”

The PDC remained in doubt until the final lap when Babb made a strategic move that ultimately proved decisive. He altered his entry into turn three, preventing the low-running Pierce and middle-occupying McDowell from mounting challenges.

“When you’re going down to the last lap you’re gonna get a slide-job if you drive in to three too high, park and leave room for ‘em,” said Babb. “Somebody’s gonna do it if you open the door. I would do it to somebody – it’s $20,000, you know.

“So I drove into turn three, went low, drifted out and caught the cushion off (turn four). You just have to protect yourself on the last lap and that’s what I did.”

McDowell, who started second and led laps 1-28 but nearly fell out of the top 10 midway through the race, had his forward progress slowed ever-so-slightly by Babb’s lane change. Pierce attempted to fill the gap underneath McDowell in a last-ditch bid to become the youngest winner in WoO history, but contact between the two ended their hopes of unseating Babb.

“The last lap Shannon was protecting the bottom like I would’ve, so I checked up and Little Bobby got in there,” said McDowell, who made his first-ever appearance at Fairbury and was looking for his first WoO win since Sept. 23, 2005, at Kentucky Lake Motor Speedway. “We all got to beating and banging a little bit for the win. I was just trying to get to the flag.

“We just feel pretty fortunate to come home second. I really got lost on the racetrack when (a lap-43 scrape with Babb in turn three) happened and it took me awhile to get back in a rhythm and find that middle (lane).”

Pierce, meanwhile, was a dejected teenager after flirting with the biggest victory of his budding career. The soon-to-be high-school junior stayed glued to the extreme inside of the track to reach the front of the pack and battled toe-to-toe with Babb and McDowell, but he couldn’t quite finish the job.

“I think my left-rear (tire) was going away there at the end and theirs were coming in,” said Pierce, who lost second place to McDowell on lap 97. “Shannon was getting going really good on the top, and once I saw him there I knew it was gonna be a really good race because he doesn’t like to give up.”

Pierce admitted in Victory Lane that he was “just pretty mad right now” over two factors that he felt contributed to his heartbreaking loss. According to Pierce, the repositioning of marker tires on the inside of the turns by track crews during caution periods left him unable to run the precise low line he used in his charge to the front and the last-lap get-together with McDowell effectively finished off his chances at victory.

Finishing in positions 7-10 was Brian Shirley of Chatham, Ill., who sat third when the race’s final caution flag flew on lap 83 for debris; Brandon Sheppard of New Berlin, Ill., who earned a $500 bonus for capturing the DirtonDirt.com Bullring Bonus for being the DIRTcar UMP regular with the best combined finishes in the Illini 100 and PDC; polesitter Billy Moyer of Batesville, Ark.; and Chub Frank of Bear Lake, Pa.

Four caution flags slowed the event, none for serious incidents. Bub McCool of Vicksburg, Miss., slowed with a blown right-rear tire on lap five; Tyler Reddick of DuQuoin, Ill., fell off the pace on lap 39; and Ricky Weiss of Winnipeg, Manitoba, spun in turn one on lap 64.

WoO regular Clint Smith of Senoia, Ga., failed to qualify for the PDC – he finished seventh in a B-Main and was not eligible to use a tour emergency provisional – but he salvaged his visit to Fairbury by winning the 30-lap Prairie Dirt Shootout Non-Qualifiers’ Race that capped the evening’s action. His triumph over Kent Robinson of Bloomington, Ind., was worth $2,000 – more than last-place paid in the 100-lap feature.

The WoO tour will remain in the Midwest for the next week for events at two tracks in Wisconsin and one in Iowa. The tour moves on to Shawano (Wis.) Speedway on Tues., July 30, before contesting the 26th annual USA Nationals on Aug. 1-3 at Cedar Lake Speedway in New Richmond, Wis., and a mid-week show on Mon., Aug. 5, at Independence (Iowa) Motor Speedway.