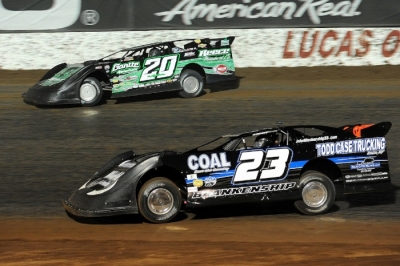 Blankenship, who took the points lead when mechanical woes struck two-time and reigning series champion Jimmy Owens on Friday at Tri-City Speedway, outdueled Owens just past the midway point of Saturday’s 50-lapper and pulled away for a $10,000 victory.

Blankenship’s third series victory at the season was his first at the track as he topped the Lucas Oil Speedway-dominating Owens, who had won six of the previous seven Lucas Oil events at the track, including three straight Show-Me 100s.

Tony Jackson Jr. of Lebanon, Mo., who had dominated regional action in recent weeks, was third in the national touring event while 16th-starting Earl Pearson Jr. of Jacksonville, Fla., and Steve Francis of Ashland, Ky., rounded out the top five in the caution-free feature that saw a few rain sprinkles near midway.

"I don't know what to say,” the 32-year-old Blankenship said in victory lane. "To beat Jimmy here is just unbelievable! He has been so strong here; I didn't think anyone was ever going to beat him here.

"Our car tonight, once we got going really was fast, to catch Jimmy and then to pass him says a lot about our team and this Rocket Chassis. We have come so close to winning here before, and to finally do it tonight in front of this big crowd, is just tremendous!”

Blankenship started fifth, wrestled the second spot from Dennis Erb Jr. on the eighth lap, then tracked down Owens, who started outside the front row and got the jump on polesitter Eric Turner.

"Dennis and I had a good race going early on,” Blankenship said. “Once we broke free from him, I was finally able to get Jimmy in my vision, he must have had a straightaway lead or better on us by the time we got to second. We slowly tracked him down, and once we got into traffic that was our chance."

Blankenship first forged ahead of Owens on lap 23, but Owens fought back to lead the next three circuits. Blankenship shot past for good on lap 28 and was never seriously challenged the rest of the way.

Owens, who holds the second spot in series points, congratulated Blankenship for the victory.

"We have been struggling over the last month, and with last night's parts failure, we didn't even get to turn a lap in the feature, but his team works hard,” Owens said. “John has gotten so much better as a driver over the last few years, it's scary for the rest of the competition what he could become.”

"I wish we had as good of a car early in the race as we had later on,” Jackson said. “To have a podium finish against these guys lets us know how far our race team has come in the last year.”