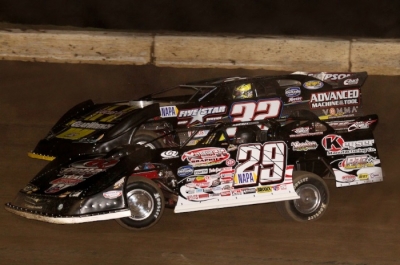 Lanigan, 43, of Union, Ky., earned $11,650 for his fourth triumph in 11 career WoO starts at Deer Creek. He has finished outside the top three just twice since he began visiting the Queensland family’s track in 2005.

“This place is awesome,” said Lanigan, whose previous wins at Deer Creek came in the NAPA Gopher 50 in 2005 and 2009 and the opening night of the 2006 Heartland Nationals. “They work (the surface) right before the feature and it’s always great racing here. It’s a good place where you can get up on the wheel and race all over the racetrack.

“We definitely feel comfortable here, and our car seems to always work good here. I just like to come to Deer Creek.”

Though Lanigan did not grab the lead at the start of the race from his pole position slot on the grid, he overtook Chris Simpson of Oxford, Iowa, for the top spot on lap 10 and never looked back. He repelled a mid-race challenge from Josh Richards of Shinnston, W.Va., before pulling away to defeat the WoO points leader by a commanding 3.876 seconds, nearly a full straightaway, at the checkered flag.

Simpson settled for a career-best WoO finish of third after driving off the outside pole to lead the first nine laps. Tour rookie Eric Wells of Hazard, Ky., finished fourth and last year’s Gopher 50 winner Shane Clanton of Zebulon, Ga., placed fifth, falling short of becoming the first driver to win the tradition-laden race in back-to-back years since Billy Moyer in 2000-01.

Racing in front of a near-capacity crowd that turned out for one of Minnesota’s most tradition-laden dirt-track events, Lanigan didn’t take long to show his speed.

“The outside had a little bit better jump getting in the corner at the start,” said Lanigan, who registered his WoO-leading seventh victory of the 2013 season and the 48th of his career. “You had that momentum on the top, and (Simpson) got ahead. But our car was pretty good on the bottom so we just raced him hard there for the first few laps and got by him.”

Richards, who started fifth in his father Mark’s Rocket house car, slid by Simpson for second on lap 13 and two laps later nosed underneath Lanigan off turn two. The 25-year-old superstar stayed within striking distance of Lanigan until the race’s only caution flag, on lap 24 when Bub McCool of Vicksburg, Miss., slowed in turn four, dulled his bid.

Lanigan immediately left Richards behind on the restart, steadily opening an advantage over his friendly rival with every circuit.

“I saw the (No.) 1 on the scoreboard so I knew Josh was back there behind me,” said Lanigan, who sits third in the points standings, 12 points behind second-place Clanton and 46 in arrears of Richards. “I just ran as hard as I could after that restart and I never saw him under me the rest of the way so I figured we were in pretty good shape. The car was awesome.”

Richards’s hopes of winning for the fourth time in his last five WoO starts evaporated during the race’s second half.

“We had a real good car and I feel that before the caution came out we definitely had something for Darrell,” Richards said. “I really wasn’t even running 100 percent yet. But after that caution we lost just a little bit and he had clean racetrack and was a little softer on right-front tire, which helped, too.

“And with about 15 (laps) to go we broke a rear bleeder off and lost the brakes. It was a handful after that. I’m just I was able to make it around the racetrack without hitting the wall.”

“They should call this place Darrell Creek,” quipped Richards, who won the NAPA Gopher 50 in 2011. “He always runs well here. There’s a pretty good chance he’s gonna win when we come here.”