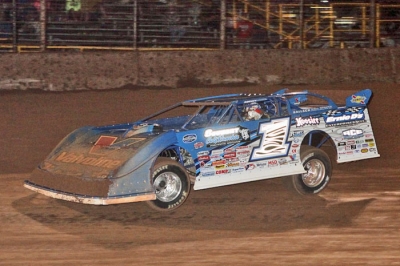 By adding a $30,650 triumph in the marquee World of Outlaws Late Model Series event to his 30-lap preliminary victories on Thursday night and Saturday afternoon, the 25-year-old superstar became the first driver to sweep the Firecracker 100 weekend since it was expanded to three full nights of racing in 2012.

“It means a lot to me to win a race of this much prestige — as well as (the fact that) this is the place I ran my first Outlaw race (in 2004),” said Richards, who has three 100-lap victories in WoO competition. “This track means a lot to me and to get a crown jewel here is huge. There are a lot of great cars here and just to be able to win one of the (weekend) races means a lot — and to win all three is unreal.”

Richards, who started second, overtook polesitter and defending Firecracker 100 winner and Scott Bloomquist of Mooresburg, Tenn., for the lead on lap 16 and never relinquished the top spot, but his march to the checkered flag was far from easy. He turned back challenges from several drivers over the remaining distance to cross the finish line first in a rough-and-tumble race that was slowed by 11 caution flags and two reds and stretched into the early-morning hours of Sunday after rain delayed the start of Saturday night’s program by two hours.

Rick Eckert of York, Pa., provided the stiffest test for Richards after rallying from a mid-race pit stop to make a run at the lead in the final circuits, but a broken rear end on lap 96 ended Eckert’s bid. That left ninth-starter Tim McCreadie of Watertown, N.Y., to take up the chase, but Richards pulled away on the final restart with four laps left to beat T-Mac by 0.976 of a second.

Darrell Lanigan of Union, Ky. — the runner-up in four of the last five Firecracker 100s — fell short of both a win and another bridesmaid, settling for third place after starting eighth. Gregg Satterlee of Rochester Mills, Pa., recovered from a trip over the third- and fourth-turn bank at the start of his heat and a lap-51 pit stop to change a flat left-rear tire to finish a Firecracker 100 career-best fourth after starting 20th and third-starter Jared Landers of Batesville, Ark., finished fifth after slipping out of the top 10 during the race’s first half.

“It was nerve-wracking there for a little bit, but I just had to try to stay focused and race smart,” Richards said. “I’ve been the guy who can go out there and run really fast laps and then tear the car up or come up short at the end, so we just had to try to harness it all and be fast but not get out of control. You have to just stay smooth, and when guys pressure you still gotta stay focused and do your thing.”

Richards had plenty of opportunities to lose his cool. After he disposed of Bloomquist to assume command early in the Firecracker, he faced serious tests from Shane Clanton of Zebulon, Ga., John Blankenship of Williamson, W.Va., and Eckert — but none of the challengers were able to shake Richards from his rhythm before experiencing problems that dashed their hopes.

Clanton, who won the Firecracker 100 in 2010, was the first to fall. He grabbed second from Bloomquist on a lap-38 restart and almost immediately drew close enough to nose under Richards’s Rocket Chassis house car, but on lap 46 Clanton lost ground when he jumped the track’s ample cushion in turn four and one circuit later he blew a right-rear tire to bring out a caution flag. Clanton pitted and returned, but he was never a factor again and finished eighth.

Blankenship moved to second following Clanton’s misfortune and after charging forward from the 16th starting spot appeared primed to threaten Richards, but he also contacted the cushion in turn four on lap 49. The misstep crushed the nosepiece of Blankenship’s car, causing him to bring out a caution flag on lap 51 and retire two circuits later.

Richards had first-hand knowledge about unforgiving Lernerville’s turn-four cushion could be. He was just fortunate enough to survive his encounter with the ledge of clay.

“In (turns) three and four the cushion was fast but it was like hitting the wall,” said Richards, who recorded his 44th career WoO victory. “I went in there one lap and actually knocked the panhard bar out of the car and slid all the way up on the frame. It changed the handling drastically — and not for the good. It was a handful toward the end of the race. I just had to not think about anything and just try to hold ‘em off.”

That became a difficult task with the emergence of Eckert, who roared from the rear of the field after slowing with a flat right-rear tire and pitting on lap 58. Seeking to become the first Pennsylvania driver to win the Firecracker 100, Eckert reached second with a lap-83 pass of McCreadie and was on Richards’s rear bumper two laps later.

The 47-year-old Eckert ducked underneath Richards several times in the corners before a red flag was thrown on lap 94 for series rookie Eric Wells of Hazard, Ky., whose car awkwardly dug into the turn-three cushion and flipped wildly off the track. Wells, whose car landed on its wheels in front of the pit grandstand, climbed out but reported later that his right arm felt sore enough that he would likely visit a doctor for further evaluation when he returns home.

Eckert attempted to resume his bid after the cleanup of Wells’s crash, but his car’s rear end failed on lap 96 and he stopped on the track to bring out the race’s final caution flag. With his departure, Richards could breathe a little easier.

“I saw Eckert that one lap,” said Richards, who stretched his WoO points lead over Clanton from eight to 44 points during the Firecracker 100 weekend. “He runs really good on the bottom of the racetrack — and I knew that’s where I needed to be, but I just couldn’t get there. I don’t know if we could’ve held him off or not, but we were gonna give it all we had for sure.”

McCreadie, who inherited second place on lap 69 when Bloomquist limped into the pits with a heavily smoking engine and again with Eckert’s retirement, was unable to mount a serious assault on Richards over the final four laps.

“We were just a little too tight,” said McCreadie, who bettered his career-high Firecracker 100 finish by one spot (he was third in 2012). “I just shouldn’t have tightened up so much. With where we started and all the mud that got on the car, it was so heavy and that affected the handling a lot.

Finishing in positions 6-9 were Steve Francis of Ashland, Ky.; Tim Fuller of Watertown, N.Y., who pitted on lap 71; Clanton; and Morgan Bagley of Longview, Texas, who pitted during the race’s last caution period. Clint Smith of Senoia, Ga., rounded out the top 10, finishing one lap down.

Among the contenders who retired early were former Firecracker 100 winners Bloomquist, Jimmy Mars of Menomonie, Wis. (stopped to bring out a caution flag on lap one) and Brian Birkhofer of Muscatine, Iowa (stopped on lap 38); Dale McDowell of Chickamauga, Ga., who was running third when he slowed on lap 60; and Bub McCool of Vicksburg, Miss., who was just outside the top five when he fell off the pace on lap 81 with a broken right-rear axle tube and a cut brake line.

The race’s first red flag was put out by officials on lap 33 so drivers could change helmets or replenish their supply of tear-offs because the 4/10-mile oval’s tacky track surface was creating visibility problems for them. Drivers were also allowed to swap helmets and clean their shields during the lap-94 red flag period for Wells.

Russ King of Bristolville, Ohio, pocketed $3,000 for winning the Uncle Sam 30 non-qualifiers’ race, which was run after the Firecracker 100.

WoO competitors have a short break before embarking on the Wild West Tour, which will visit six tracks in five states and one Canadian province from July 5-12. The swing kicks off Friday at Amsoil Speedway in Superior, Wis.