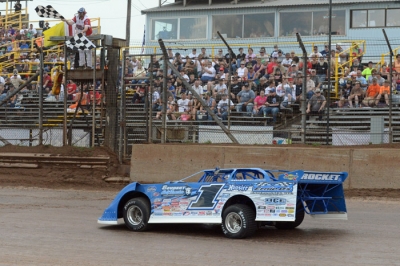 The two-time WoO champion started from the pole position and led the entire distance to become the first driver to win both Firecracker 100 preliminary features since the weekend was expanded to three full nights of racing in 2010. He earned $6,150 for his fifth triumph of the season on the national tour with his father Mark’s Valvoline-sponsored Rocket Chassis house car.

Shane Clanton of Zebulon, Ga., shared the front row with Richards for the start and chased the WoO points leader from flag-to-flag. He closed within a few lengths of Richards in the final laps but settled for a second-place finish, 0.397 of a second behind the victor.

Richards, 25, cited his performance in Ohlins Shocks Time Trials and his heat race for propelling him to the checkered flag on a challenging track surface baked by the afternoon sun. Heavy rain on the event’s originally-scheduled date on Friday night forced officials to run the program on Saturday afternoon before the evening’s Firecracker 100 finale.

“The pill draw was huge,” said Richards, who picked the pole position in the redraw among heat winners, “but we still had to earn our spot up front. We went out second-to-last in qualifying, but I knew we had a really good car so I just tried to make a smooth lap and we ended up qualifying fifth. Then I was able to get by (Ron) Davies there in the heat (for the win); I had to make the move early because I knew once everybody got in line it would be hard to pass and we were able to get that done.”

Richards cruised alone out front for most of the race, which was slowed by just a single caution flag on lap nine for a turn-four tangle involving John Blankenship of Williamson, W.Va., and Don Angellichio of Greensburg, Pa. Clanton, 36, drew close only when Richards began nearing slower cars.

“We got a little closer there at the end because I think Josh didn’t want to get in lapped traffic,” said Clanton, who remained second in the WoO points standings, 28 points behind Richards. “With a rubbered-up racetrack it’s kind of hard to deal with lapped traffic, so he just done his job. He got out there to the lead and didn’t make any mistakes.

Richards is confident entering tonight’s $30,000-to-win Firecracker 100. He will start the first heat race from the pole position.

“Overall we really didn’t make any changes to the car from Thursday night,” said Richards, who outdueled Steve Shaver of Vienna, W.Va., to win the first preliminary feature. “I know the track was different today, but I still feel like it had a pretty good balance to it. I know the racetrack is gonna be 180 degrees different tonight, but I feel pretty good about our chances.”

After the afternoon program teams began preparing their cars for the evening's Firecracker finale. Officials expect to start the evening show on schedule with hot laps at 6:50 p.m. and the first of six heat races at 7:35 p.m.