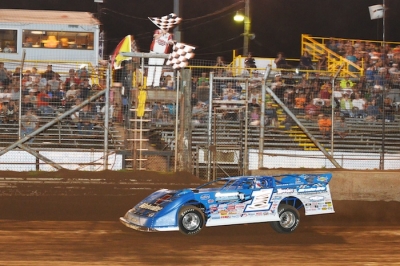 SARVER, Pa. (June 27) — Josh Richards was a man on a mission Thursday night at Lernerville Speedway.

The $6,150 victory was Richards’s fourth of the 2013 WoO season and marked the third time in the last four years that he has captured the opening-night feature of the Firecracker 100 extravaganza. It also got him back on track after a winless four-race swing through New York and Canada that he ended with an uncharacteristic 13th-place finish on June 25 at Canandaigua (N.Y.) Motorsports Park.

“We struggled a lot this past week,” said Richards, who scored just one top-five finish during the northern trip with his father Mark’s Valvoline-sponsored Rocket Chassis house car operation. “It was actually kind of embarrassing. It wasn’t common for this team to be running the way we were, so we made some changes, swapped cars today and tried to get our heads together to make the right decisions.

“We were good tonight, but we still have a long weekend ahead of us and I’m sure everybody is gonna work on their stuff.”

Shaver settled for a runner-up finish after leading laps 1-17, flashing under the checkered flag 1.113 seconds behind Richards. WoO rookie Eric Wells of Hazard, Ky., finished third after starting from the pole position — earning him a career-best finish at Lernerville in his second visit to the track — while eighth-starting Davey Johnson of Latrobe, Pa., challenged Wells late in the distance but placed fourth.

Defending WoO champion Darrell Lanigan of Union, Ky., took fifth after coming out on top of a last-lap battle with Dale McDowell of Chickamauga, Ga., and Dan Stone of Thompson, Pa., who finished sixth and seventh, respectively.

Richards, who has recorded four of his 43 career WoO victories at Lernerville, mastered the 4/10-mile oval that was tacky and fast after being doused by heavy rain earlier in the day.

After bursting forward from the fifth starting spot to second by lap four, Richards immediately began to challenge Shaver, who started second in the Rumley Enterprises-Bobby Labonte Racing Longhorn chassis. They swapped the top spot off turn four on lap nine — without an official lead change at the line — and did the same off turn on lap 17, but Richards slid in front for good as lap 18 was scored.

“I tried to move around to see where I could make the move and where it would be the best place,” said Richards, whose triumph assured him of a pole position starting spot in a Firecracker 100 heat race on Saturday. “I just tried to get where I got a run and could hug the bottom off of (turn) two or slide (Shaver) through three and four. We raced really hard.”

Shaver, 49, hailed Richards’s effort while expressing satisfaction with a second-place finish in his first WoO start of the season.

“Seconds sucks, but helluva job by Josh,” Shaver said. “We just weren’t near as good as him. We had a heck of a race for the lead though, and I don’t believe we ever touched.

“We’re happy with our run. To be able to come out here and run with these guys like that is a tribute to Kevin Rumley, who’s designed this chassis. He’s done a real good job with it. I’m proud of him.”

Finishing in positions 8-10 were 14th-starting Shane Clanton of Zebulon, Ga., whose deficit to Richards in the WoO LMS standings expanded from eight to 24 points; 16th-starter Tim McCreadie of Watertown, N.Y.; and 13th-starter Rick Eckert of York, Pa.

Two caution flags slowed the event. The first came on lap 10 after Steve Francis of Ashland, Ky., Mike Marlar of Winfield, Tenn., Ron Davies of Warren, Pa., and Tim Fuller of Watertown, N.Y., tangled underneath the flagstand, and Bub McCool of Vicksburg, Miss., triggered the second when he stopped in turn two on lap 28.

A 57-car field was entered in the event, which started precisely on schedule despite the significant showers that saturated the area through the early afternoon. With rain threatening throughout the evening, officials spun off the program quickly, completing all racing just before 10 p.m.

The Firecracker weekend continues Friday with another WoO program topped by a 30-lap feature paying $6,000-to-win. Drivers will use their best finish from the Thursday and Friday competition to align themselves in the heat races for Saturday’s headlining Firecracker 100, which pays $30,000 to win.