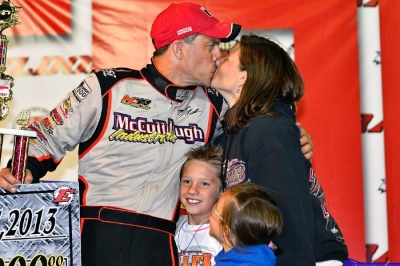 Miller, 41, was victorious for the second consecutive night, remaining perfect for the UMP DIRTcar-sanctioned weekend with a powerful march to the checkered flag in the feature reserved for the evening’s odd-numbered qualifiers.

The 40-year-old Erb, meanwhile, outdueled Chris Madden of Gray Court, S.C., over the final five laps of the 25-lapper for even-numbered qualifiers to record his first win at the high-banked, half-mile oval since the October 2009 UMP DIRTcar Nationals.

Miller’s drive to victory in the first feature stamped him as a favorite to capture the $100,000 top prize in Saturday night’s 100-lapper, which pays $100,000 to the winner. He appeared even stronger than he did in winning a 25-lap preliminary event on Thursday night.

After bolting forward from the third starting spot to pass Steve Casebolt of Richmond, Ind., for the lead on lap three, Miller sailed away in veteran Buckeye State racer Rick Delong’s Rocket No. 3. He was never seriously challenged in a race that was slowed only twice by caution flags, on laps three and seven.

“This is pretty fun — I ain’t gonna lie to you,” said Miller, who won the Dream in 2005. “The car’s great and everything’s kind of working out right now. The car was better tonight, the track was slick and we’re getting a lot closer to where we need to be for 100 laps.”

Miller, who has started Dream features nine times since 2000, cruised across the finish line 2.175 seconds ahead of Newport, Tenn.’s Jimmy Owens, who started seventh and battled for the runner-up spot with Casebolt until finally grabbing the position on lap 21. Casebolt settled for third place after leading laps 1-3 from the outside pole, giving former Dream winners a sweep of the podium.

Josh Richards of Shinnston, W.Va., who won a preliminary feature Thursday, started from the pole position but slipped to fourth in the final rundown. Eighth-starter Brian Birkhofer of Muscatine, Iowa, finished fifth after overtaking Scott James of Lawrenceburg, Ind., on lap 22.

In the nightcap, Erb surged from the seventh starting spot to second in just four laps and then spent most of the distance chasing down Madden. The former UMP DIRTcar Summernationals and weekly points champion finally caught Madden on lap 19 and nosed ahead to lead the next circuit, but Madden refused to go down quietly and regained command on lap 22.

Erb made his deciding move moments later, ducking underneath Madden through turns one and two and flashing ahead down the backstretch. Erb was back in the lead as lap 23 was scored and beat Madden to the checkered flag by 1.127 seconds.

“We just kept plugging away,” said Erb, whose best finish in three career Dream is fifth in 2012. “I had been running the middle most of the race, but I was looking around a little and one lap I dropped down and it stuck pretty good. Then I gained up on (Madden) and just stayed there.

“We swapped spots there a couple times, but I was able to stay down there on the bottom and get ahead of him and hold on.”

Erb is hopeful that Friday’s success can propel him to even greater joy on Saturday night.

“It feels real good,” Erb said of his Team Zero by Bloomquist car. “I’m just worried about starting spot (in a Saturday heat). We didn’t qualify well, but tonight we came out of the fourth row of the heat to qualify so hopefully we can be racy and move up in the heat race tomorrow and get in the (Dream).”

Madden, who started sixth, settled for second place after leading since lap two. He couldn’t quite match Erb’s speed through slower traffic.

“We were good in open track when we had all the clean air,” said Madden, who has started all but one Dream since 2004 and owns a top finish of fourth (2010). “Then we ran up on that lapped traffic, my car just got real free there at the end and we couldn’t hold on.”

Madden did turn back the last-lap challenge of Batesville, Ark.’s Billy Moyer, who finished third. Moyer started from the pole position and led the first lap, but he was penalized two positions for jumping a first-lap restart — after the only caution flag of the race, for a slap of the turns one and two wall by outside polesitter Mason Zeigler of Chalk Hill, Pa. — and didn’t climb back into serious contention until the final laps.

Don O’Neal of Martinsville, Ind., finished right behind Madden and Moyer in fourth, and third-starter Doug Drown of Wooster, Ohio, recovered from an early fall out of the top five to pass Dustin Neat of Campbellsville, Ky., for fifth on lap 15 and finish there.

Jonathan Davenport of Blairsville, Ga., was the fastest qualifier in Friday night’s multi-car time trials with a lap of 15.386 seconds. His circuit ended up being the fastest of the two nights of time trials, besting the lap turned on Thursday by Shane Clanton of Zebulon, Ga., by a mere .001 of a second.

With Saturday night’s six 15-lap Dream heat races aligned by each driver’s best lap time from the two rounds of qualifying, Davenport’s overall fast time earned him a visit to the Eldora stage during Friday’s program to spin the inversion wheel. It stopped on 6, giving him the sixth starting spot in Saturday’s first heat.