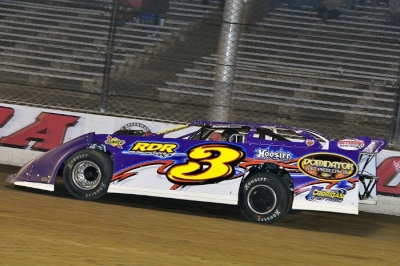 Matt Miller heads for victory in the nightcap. (thesportswire.net)

With the UMP DIRTcar-sanctioned event’s 84-car field split in half by time-trial results, Richards captured the frenetic first feature for odd-numbered qualifiers and Miller soared to the checkered flag in the nightcap reserved for even-numbered qualifiers.

Richards, 25, pulled off a dramatic last-lap pass of Ashland, Ky.’s Steve Francis to grab the $2,500 top prize in the wildly-competitive first feature, which included seven lead changes among four drivers. A caution flag with two laps remaining put Richards on Francis’s outside for the restart and he took full advantage of the opportunity, surging by Francis off the top of turn two on the final circuit.

“It was a fun race,” said Richards, who started sixth driving a Valvoline-sponsored Rocket Chassis house car that he debuted last Saturday night. “The track had some speed to it even though it was hard, and you could really move around on it and race. You had to be aggressive if you were gonna pass somebody and that’s what we did at the end.”

After beating Francis to the finish line by about a car length, Richards admitted that he felt fortunate to earn his second career win at the high-banked, half-mile oval. He was nearly knocked from contention in an opening-lap scramble in turn two that stacked up several cars, including John Blankenship of Williamson, W.Va.

“(Brian) Shirley slid up through there when we were racing and I got turned sideways (at the start) and I thought we were done right then,” said Richards, whose previous Eldora triumph came in an American Late Model Series event on May 25, 2008. “But somehow we survived that with only some cosmetic damage and we got to keep our spot.”

The victory gave Richards high hopes of enjoying an even greater celebration after Saturday night’s 100-lap Dream, which boasts a $100,000 winner’s purse. The current World of Outlaws Late Model Series points leader has made five Dream 100 starts since 2005 with a top finish of sixth in 2010.

“I didn’t really feel all that great hot-lapping, qualifying or heat-racing even though we were fast, but we changed our package around a little bit and actually I feel really comfortable now,” Richards said. “Just a few minor tweaks and I feel we’ll have something a lot better for Saturday than we have in the past.”

Francis settled for a runner-up finish after swapping the lead five times with Jonathan Davenport of Blairsville, Ga. Davenport passed outside front-row starter Darrell Lanigan of Union, Ky., for the lead on lap three and appeared primed for a breakthrough Eldora victory until Francis, who started seventh in NASCAR star Clint Bowyer’s Barry Wright car, moved in to start a dogfight for the top spot.

Francis gained control on lap 10, but Davenport returned the favor with an outside charge to move back ahead on lap 16. It was Francis on top on lap 18, Davenport on lap 19 and Francis again on lap 20.

Lanigan, who led laps 1-2, finished third. Brian Shirley of Chatham, Ill., broke into the top five following the final restart to place fourth and Davenport slipped back to fifth.

Miller flexed some serious muscle in the second 25-lapper, steering Rick Delong’s Rocket No. 3 around the extreme outside of the Big E to take the lead from race-long pacesetter Jimmy Owens of Newport, Tenn., on lap 11. The 2005 Dream winner never looked back en route to a 2.163-second victory over Owens, who outdueled Bub McCool of Vicksburg, Miss., for second-place money.

“This is one of those places where if you slow yourself down you lose your rhythm,” said Miller, who wasn’t seriously challenged once he took control of a race slowed by only a single caution flag on lap 20. “So I felt better just attacking. If I’m racing, I’m not thinking about laps.”

The $2,500 score put Miller in the right frame of mind for the remainder of the Dream XIX weekend.

“That was fantastic,” said Miller, who since 2005 has won six American Late Model Series A-Mains at Eldora. “We came here a couple weeks (earlier this year) and struggled. There were some late nights sitting there sleepless trying to figure out how we could fix this thing, and the guys and I came together with Mark Richards and those guys (at Rocket Chassis) and that thing was on rails tonight.”

Owens, who started from the outside pole, exchanged the runner-up spot several times with McCool late in the distance before securing the second-place finish. Owens is one of only five drivers to win both of Eldora’s marquee Dirt Late Model events, the Dream and World 100.

Last year’s Dream champion Shane Clanton of Zebulon, Ga., was the fastest qualifier in Thursday night’s multi-car time trials with a lap of 15.387 seconds, but after he spun a four for the heat-race inversion he opted to park his Kennedy Motorsports Capital Race Car for the remainder of the night.

The Dream XIX by Ferris weekend continues on Friday night (June 7) with a second preliminary night of competition. Time trials will again split the field into two groups for heat races, B-Mains and 25-lap features that will pay $5,000 to win.

Heat races for Saturday night’s Dream XIX by Ferris will be aligned using drivers’ best qualifying laps from time trials on Thursday and Friday, putting plenty of importance on the second round against the clock on Friday night. Hot laps are scheduled to start at 5:30 p.m. on Friday with time trials to follow. Racing will get the green flag at 8 p.m.

Fans can obtain tickets information for the Dream XIX by Ferris by going online to eldoraspeedway.com or calling (937) 338-3815.

Fans who can’t make it to Eldora in person this weekend can still watch all the action live by purchasing the live pay-per-view production at eldoraspeedway.com.