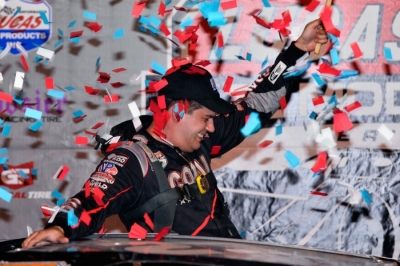 LOCUST GROVE, Ark. (May 18) — John Blankenship of Williamson, W.Va., raced to his richest career victory Saturday at Batesville Motor Speedway in the Bad Boy 98 for his first Lucas Oil Late Model Dirt Series win of the season and fifth of his career.

The sixth-starting Blankenship tracked outside front-row starter and race-long leader Dennis Erb Jr. much of the race, slipping past briefly on lap 61 before taking over for good on lap 68 when Erb pulled his smoking machine to the pits. | Prelims | Video | Slideshow

"I have to thank all of my crew, (crew chief) Tom Buckingham and everyone else. This is the biggest win we have ever had,” said Blankenship, who built comfortable leads in the race’s late stages. “That was quite a race for the lead between Dennis and me, and then I saw smoke out of his car and I knew he was in trouble. This Rocket Chassis car has been good all year long, we have been knocking on the door for a big win like this since last year, and tonight it finally happened.”

Owens edged into the series points lead over Don O’Neal, who settled for eighth after a mid-race pit stop. Hometown driver Wendell Wallace ran among the leaders the first half of the race, but a flat tire ended his race on lap 42.

Erb appeared to be the driver to beat the first half of the race, but smoke bellowed from under his No. 28 on the backstretch after he led 67 laps, forcing him to the turn-one exit for the pits. Blankenship ran unchallenged the rest of the way.

"The track was really racy tonight,” Blankenship said. “Wendell was really good there early on until he had that flat; once he went out, we were able to stay close to Dennis with the caution flags.”

Smith, winner of the previous series race at La Salle, Ill., simply couldn’t keep up late in the race.

"Congrats to John on the win. He was gone there at the end. I couldn't see him on the track anymore,” Smith said. “Our car was tight early on, but as the race wore on, we got a whole lot better. Hey, this has been a solid two weeks for us.”

The most serious of six cautions came on the 14th lap when Jared Landers, Scott Bloomquist, Jesse Stovall, Jerry Lierly and Timothy Culp were among cars tangled up in turn three; Culp and Stovall were among drivers done for the night.

Blankenship wasn’t the only big winner. Each of the feature starters were paired with lucky fans, and Jesse Love left the track with a 2013 Kia Soul by virtue of his pairing with Blankenship. He posed with Blankenship and his new ride in victory lane. 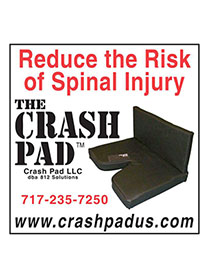