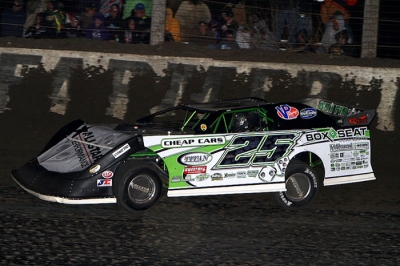 Jason Feger led every lap of the Illini 100. (mikerueferphotos.photoreflect.com)

The 34-year-old star from Bloomington, Ill., marched to victory in the fifth running of the Illini 100, becoming the first home-grown driver to win the blockbuster World of Outlaws Late Model Series event and setting off a raucous party among his legion of Feger Nation supporters in the process. | Slideshow | Video

“This is just awesome,” said Feger, who earned $20,050 for the biggest victory of his racing career. “I almost feel better for my fans than myself because I finally was able to put it together for them here at Farmer City. I’ve always said the hardest thing to do is win a big race at your home track because of all the added pressure, and man, we did it.”

Even the extremely windy conditions that whipped across the quarter-mile oval throughout the day and continued after the checkered flag could not dampen Feger’s excitement.

“I wish it was about 80 degrees out but we’re definitely gonna make do,” Feger said while celebrating at his trailer in the pit area with dozens of family members, friends and fans. “This is the party we’ve been wanting to have here for a long time, so we’re definitely gonna drink the cooler dry. We only live 25 minutes away but we might not get home till Tuesday.”

Feger roared off the outside pole position starting spot to lead the race’s entire distance in his Rhyne-powered Pierce car, but he survived several anxious moments and repeated challenges from two-time Illini 100 winner Billy Moyer of Batesville, Ark., to secure his second career WoO triumph. He pulled away following a final restart on lap 96 to defeat Moyer’s Victory Circle machine by 1.098 seconds.

Brian Birkhofer of Muscatine, Iowa, finished third after starting from the pole position in his MB Customs car. He fell back to third at the initial green flag and raced there for most of the distance, only briefly overtaking Moyer for second one-third of the way through the event.

Shane Clanton of Fayetteville, Ga., advanced from the eighth starting spot to place fourth in the Kennedy Motorsports Capital Race Car and Scott James of Bright, Ind., steadily moved forward from the 12th starting position to complete the top five in the Warrior Chassis house car.

Feger, whose career-best finish in three previous Illini 100 starts was sixth in 2010, candidly admitted that he had never worked harder to win a race. His 100 laps racing at the front of the pack were filled with stress.

“Honestly, I am just exhausted,” said Feger, who maintained command through five caution flags. “That was just a long, tough race. This is a very unique place, very demanding. You can’t rest for a second here, so I was running the ragged edge the whole way.”

The lead nearly slipped from Feger’s grasp on several occasions, including lap 58 when he pushed high in turn two and saw Moyer momentarily nose ahead down the backstretch. But Feger maintained his composure and powered around the outside of turns three and four to stay in the top spot.

Feger went on to build nearly a straightaway edge over Moyer before two late caution flags, on laps 95 and 96, shrunk his final victory margin. Moyer, 55, was effectively resigned to a runner-up finish even after the late restarts gave him a final shot at a record third Illini 100 triumph.

“I kind of knew with 20 (laps) to go that it was over with,” said Moyer, who started fourth. “(Feger) did a good job. He didn’t make any mistakes.

“I got up there beside him a couple times on the inside, but I knew I couldn’t leave the door open behind me too many times for Brian (Birkhofer) to get a run on the outside of me (to take second). You had to be out there on the (outside) ledge off the corner on both ends. You could kind of make some different grooves getting in, but on exit you better be on that one spot.”

Feger never wavered from the prime route around the venerable fairgrounds bullring.

“When we were running through the lapped traffic I just really tried to race smart and not make any mistakes,” said Feger, who previous WoO victory came on May 24, 2009, at Beaver Dam (Wis.) Raceway. “I didn’t want to just give it away to somebody. I wanted to make them beat me without me doing something that would cost me the race, and it worked out tonight.

“It was real tough, though, because this was really only my second race of the season,” he continued. “I’m still not driving that good. My timing could be way better, so honestly the car is way better than the driver right now – that’s a good thing, though, because I can fix me faster than I can fix the car. I knew the car was good, so it was just a matter of whether I could do it. I just tried to stay focused and get up on that wheel.”

When Feger took the checkered flag, the track’s packed grandstand let out a huge roar for the local boy who made good. He then took his customary backward victory lap to get close to his ‘Feger Nation’ fans in the drive-in section outside turns one and two and was greeted in the winner’s circle by his overjoyed team and another loud ovation.

“It hasn’t even really set in yet,” an awed Feger said more than a half-hour after the race ended. “I don’t even think I’ve caught my breath.

“It’s crazy. When the race ended, I felt like I was in a trance. I’m still just trying to remember what even happened out there. I mean, man – to win $20,000 at my hometrack and be the first guy from Illinois to win the Illini, it’s just an amazing feeling.”

While Feger exulted in victory, two other pre-race favorites from Illinois sat dejectedly in the pit area following rough nights. Defending DIRTcar UMP Summer Nationals and national weekly series champion Brian Shirley of Chatham, Ill., brought out the race’s first caution flag on lap 25 when he slowed on the homestretch, and Shannon Babb of Moweaqua, Ill., failed to finish among the top five for the first time in five Illini 100 starts after a backstretch scrape sent him spinning out of 11th place on lap 32.

The race’s most significant incident occurred on lap 41 when Tim Fuller of Watertown, N.Y., and defending Illini 100 champ Jimmy Mars of Menomonie, Wis., tangled in turn two while running fifth and sixth, respectively. The accident came after Fuller slid sideways to avoid his Kennedy Motorsports teammate Clanton, who momentarily got out of shape ahead of him.

WoO regular Tim McCreadie of Watertown, N.Y., triggered the lap-95 caution period when he slid off the backstretch due to a broken fifth-coil shock. He had just been passed for fifth place by James one lap earlier.

WoO points leader Josh Richards of Shinnston, W.Va., finished one lap down in 12th after running the majority of the distance without power steering. He was in seventh place shortly after a lap-25 restart when his car began to show smoke.

Richards, who pitted on lap 32, remained atop the WoO standings by two points over Clanton.

Saturday night’s program began with a pair of 20-lap B-Mains won by Eric Wells of Hazard, Ky., and Bub McCool of Vicksburg, Miss.

The next action for the WoO is the inaugural Buckeye 100 on April 12-13 at NAPA Auto Parts Wayne County Speedway in Orrville, Ohio. Ohlins Shocks Time Trials and heat races will be contested on Fri., April 12, and B-Mains and the $20,000-to-win 100-lapper are set for Sat., April 13.