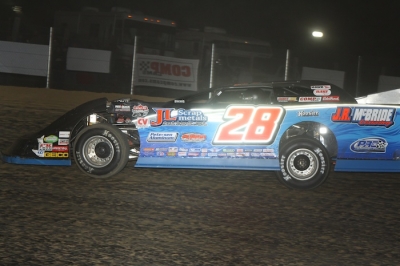 BROWNSTOWN, Ind. (March 23) — Eighth-starting Dennis Erb Jr. was in a hurry getting to the front Saturday at Brownstown Speedway’s Indiana Icebreaker. And the 40-year-old Carpentersville, Ill., driver never slowed down, motoring through traffic in rolling to a 50-lap victory worth $10,000. | Video | Slideshow

Using a line so high that his No. 28 briefly dipped off the frontstretch proper nearly every lap, Erb wasn’t challenged the rest of the way in beating Lucas Oil Late Model Dirt Series points leader Don O’Neal of Martinsville, Ind., to the checkers by nearly a straightaway.

“The car just worked awesome in that feature there,” said Erb, who picked off four cars on the first lap and went around early leader Josh McGuire on lap six. “We got up on the high side there and just started railing around and picking ‘em off there. It just never quit working, so I was real pleased with everything tonight.”

The runner-up O’Neal, who took the second spot from Bobby Pierce after the race’s lone caution on lap 20 for Michael Asberry’s turn-two spin, couldn’t keep up with Erb, who had a cushion of four lapped cars at the finish.

“I just think we just hit on everything right tonight,” said Erb, who notched his series-leading third Lucas Oil victory of the season and fifth of his career — the first away from East Bay Raceway Park near Tampa, Fla.

In the feature, Erb ran a groove unavailable during heat races at an event that started during the sunny late afternoon to beat cold weather. But officials reworked the surface following the four prelims won in the low groove and Erb took advantage in the main event.

“After (track workers) did that there, the racetrack got cleaned up there where you could move around on it,” Erb said. “It definitely turned into a good show.”

A good show from Erb’s point of view, but despite the multiple grooves, the outcome was seldom in doubt while O’Neal settled for second. Greg Johnson of Bedford, Ind., debuting a Revelution Chassis for car owner Gary Engle, was third while Jared Landers of Batesville, Ark., nipped Pierce, of Oakwood, Ill., for fourth at the finish.

“We just had a second-place car tonight. He had a pretty good hot rod that whole race. To come home second here is a good points night,” said the fifth-starting O’Neal, atop the series points ahead of Erb. “He could just maneuver (through) traffic better than we could. I was really wanting to win this thing for my buddy Slick. It just wasn’t meant to be.”

Johnson, who started seventh and moved into the third spot on lap 42, nearly caught O’Neal in the late-going before a car pulling off the track forced him to briefly check up.

“We was coming on ‘em hard. I was pulling in on O’Neal awful hard, and I just thought, ‘Man, if we can just get a caution now.’ We never did,” Johnson said. “I lost all my momentum with two to go. I just couldn’t catch up.”

Erb, whose previous victories include a 2007 World of Outlaws Late Model Series triumph, knew O’Neal and others were bearing down on him after the lap-20 restart, but he never let anyone get close enough to seriously challenge.

“There’s a whole group of them behind you there, so you just had to get going. Luckily the car fired good and we were able to get back on track,” said Erb, who kept lapped cars between his car and O’Neal’s most of the last 20 laps. “I was just a little nervous there. They were racing there all over a little bit. I was just trying to sneak through there and not making any contact and keep my momentum up.”

While Erb’s previous four Lucas Oil Series victory came at East Bay, the quarter-mile Brownstown oval is a track he likes, too.

“To be able to come here to Brownstown, I just love racing here, and I’ve had some wins here before,” he said. “Just everything worked good tonight and the car performed great.”

Notes: Erb’s Bloomquist Race Car has a Kuntz & Co. powerplant with sponsorship from JL Scrap Metals, J.R. McBride Leasing, PRC, Petersen Aluminum and Hoosier Tire. ... Erb thanked crew chief Heather Lyne, who joined him in victory lane. “You can’t thank her enough,” he said. “She does all that hard work in the pits there, and I can sit back and make decisions and give her the last-minute fire drill. I’m glad to have here helping me.” ... The Indiana Icebreaker was first post-Speedweeks event for series and first since the tour instituted new tire rules that requires drivers to use series-specific Hoosier tires on the right rear. ... Jared Landers had an up-and-down night. He was one of two fast group qualifiers, but he clipped an infield tire in his heat race, damaging his car’s nosepiece. He rallied from 10th in the main event for a fourth-place finish. ... Mike Marlar was going to skip the event because of a broken generator, but Lucas Oil officials invited him to park alongside the secondary series trailer and use its generator. He finished seventh in the feature after struggling in his heat race. ... Joe Janowski of Columbus, Ind., won last week's season opener and finished 22nd. ... Among drivers failing to make the feature lineup: Tyler Allen, Justin Rattliff, Tim Tungate (who drove Rattliff’s backup car), Devin Gilpin (who won the modified feature), Mike Benedum, Marty O’Neal, Greg Kendall, Aaron Ridley and Kent Robinson. ... Rain or mud has plagued Brownstown series events in recent years, but the weather was dry and sunny with afternoon temps in the 50s that quickly fell in the early evening.