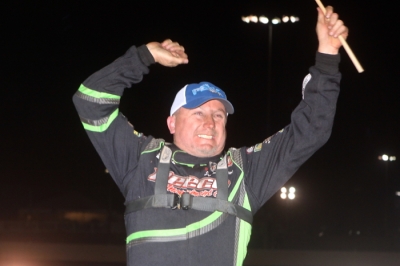 The $10,000 triumph marked the fourth consecutive year that Owens captured the Saturday-night finale of the spectacular weekend – and, as a result, shared the post-race spotlight with the newly-crowned WoO champion. Darrell Lanigan of Union, Ky., who finished third, was presented his second career World of Outlaws championship trophy in a confetti- and fireworks-filled ceremony moments after Owens stood on the winner’s stage.

Owens, 40, certainly didn’t have his amazing feat diminished by the dual Victory Lane celebrations. He earned plenty of recognition from the standing-room-only crowd of over 14,000 and the national television audience that watched the PEAK World Finals by NAPA on the SPEED cable network.

“Words can’t describe how much it means to win these two races this weekend,” said Owens, who has been victorious a record five times in 12 WoO feature events contested during the PEAK World Finals by NAPA since the event’s birth in 2007. “It just means so much to me to pull this off. The electricity in the air with all these people here for this show is like no other race we run.”

Owens, who started third, passed Chris Madden of Gray Court, S.C., for the lead on lap five and never looked back. He easily handled two restarts late in the distance to cross the finish line 1.646 seconds in front of Watertown, N.Y.’s Tim McCreadie, who charged forward from the ninth starting spot to register a runner-up finish that moved him past Chub Frank of Bear Lake, Pa., to fourth in the final WoO points standings.

Lanigan swapped second place with McCreadie before finally ceding the position on lap 43 and settling for third. Madden faded to fourth at the finish after starting second and leading laps 1-4 and WoO regularClint Smith of Senoia, Ga., advanced from the 10th starting spot to complete the top five.

“We had a good car last night but I felt like we could still do some things to make it better,” Owens said of his potent Mike Reece-owned Team Zero by Bloomquist mount. “We worked on it today and it was just awesome. We really found something for this place.”

McCreadie, 38, didn’t get a shot at racing Owens from second place on either of the race’s restarts. He reached third with his Warrior machine two circuits before the first caution flag flew, on lap 38 after Shane Clanton of Fayetteville, Ga., slammed the turn-three wall. McCreadie then briefly took second from Lanigan on the ensuing restart before Lanigan nosed back ahead to sit in the runner-up spot when Dale McDowell of Chickamauga, Ga., slowed to bring out a caution flag on lap 42.

The bridesmaid finish was McCreadie’s best on the WoO tour since he was second on July 7 at Deer Creek Speedway in Spring Valley, Minn. It came at an opportune time, pushing him past Frank, who finished 19th, for fourth in the points standings – a one position jump worth an extra $5,000 in points-fund cash ($35,000 versus $30,000 for fifth).

Lanigan will receive $100,000 for his WoO championship, giving him over $425,000 in earnings on the 2012 tour. It’s a pretty good consolation for falling short of victory once again at The Dirt Track, where Lanigan is winless in 20 career starts.

“I think we may have been a little bit better (than Owens) before that caution (on lap 38),” said the fourth-starting Lanigan, who steered his Rocket car into second place with a lap-18 pass of Madden. “I think we were catching him a little bit, but I think the caution hurt us a little bit. We just didn’t fire after the restart.

“We were good, but we just missed it a little bit and Jimmy was good this weekend.”

Lanigan’s final championship margin was a record 228 points over Eckert, who finished 21st after relinquishing a top-five spot when his car lost power during the lap-42 caution period.

“It’s definitely been a heck of a year,” said Lanigan, who also won the WoO title in 2008. “To do what we did – win (a record) 15 races, win Cedar Lake (the USA Nationals), everything else – it’s just been a phenomenal year. The first (championship) was nice, but to get your second one the way we did is definitely unbelievable.”

Don O’Neal of Martinsville, Ind., finished sixth in the Childress Racing No. K71. Steve Francis of Ashland, Ky., advanced from the 16th starting spot to place seventh; Josh Richards of Shinnston, W.Va., was a quiet eighth; WoO rookie Kent Robinson of Bloomington, Ind., was ninth; and Walker Arthur of Forest, Va., rounded out the top 10.

The stars of the 2012 WoO tour will be honored – and share in nearly $400,000 in points-fund cash – during the tour’s annual awards banquet on Sunday night (Nov. 4) at the Great Wolf Lodge in Concord, N.C

The 2013 WoO campaign is scheduled to kick off on Feb. 8-9 with the ‘Winter Freeze’ doubleheader at Screven Motor Speedway in Sylvania, Ga.

Shane Clanton and Chub Frank will use series provisionals to start the main event from the 13th row, while Earl Pearson Jr. will use the fast-time provisional to start 27th. Bub McCool and Vic Coffey will use emergency series provisionals to start 28th and 29th. ... Rick Eckert and Chris Madden will share the front row for tonight's main event after the redraw among heat race winners. Jimmy Owens and Darrell Lanigan will start side-by-side in the second row with Don O'Neal and Dale McDowell sharing row three. ... After relatively uneventful heat races, track crews are taking a break to rework the track surface. … Chris Madden’s heat victory came after mechanical issues in hot laps. His crew had to thrash to make repairs to his Bloomquist Race Car to make it to the track in time. … The track reported a sell-out of grandstand seats. Standing-room only tickets are still available. ... Pennsylvania fan Andy Pirst won a raffle for a new Rocket Chassis from the charity Racers for Tots.

Scott Bloomquist dominated the final consolation race, opening up more than a straightaway lead in winning from the pole. Second-starting Billy Decker held off Jared Landers and Steve Shaver for second. He'll join Bloomquist in transferring to the main event.

Eric Wells cruised to victory in the second 12-lap B-main, winning by nearly a straightaway over Ray Cook. The second-starting Cook fell to third on the start of the race but moved by Shane Clanton midway through to grab the main event transfer. The race's only caution appeared on lap four when Coleby Frye spun in front of Dennis Franklin back in the pack.

Jonathan Davenport got the jump on Dennis Erb Jr. on the start of the first of three consolation races and led every lap to earn the victory and a main event starting spot. Erb followed Davenport across the finish line to also transfer to the main event. Two complete restart were needed were needed for separate tangles between Chub Frank and Pancho Lawler. After the second inncident, Frank displayed his displeasure with Lawler. The race ran caution-free after getting going on the third start.

The sixth and final heat looked much like the previous five with polesitter Dale McDowell posting a flag-to-flag victory in the caution-free race. Jason Feger won a side-by-side battle with Kent Robinson early in the race but couldn't run down McDowell. He settled for second while Robinson topped Billy Decker for the third and final transfer spot.

Darrell Lanigan kept a decent lead over Kenny Moreland throughout the fifth heat to post another flag-to-flag performance. Moreland charged hard on the start of the race to outduel Steve Shaver and Scott Bloomquist for second and raced hard to keep pace with Lanigan. But he faded late in settling for second. Fifth-starting Morgan Bagley moved to third early and held off Bloomquist in a side-by-side battle on the final lap to earn the third and final transfer spot. The only caution waved when Jay Sessoms spun on the first attempt to start the race.

Rick Eckert posted another flag-to-flag performance in another caution-free heat race, winning by more than a straightaway over Clint Smith and Steve Francis. Smith's car began trailing heavy smoke late in the race, allowing Francis to close in considerably. Sixth-starting Josh McGuire was one of the few drivers to attempt to run the high side so far in heat race action, but the groove quickly went away after he made it as high as fourth.

Chris Madden led every lap for another runaway performance in the third heat, which also ran caution-free. Outside polesitter Brandon Sheppard kept pace with Madden early but faded after the first few laps and let Tim McCreadie slip by him for second late in the race. Sheppard settled for the third and final transfer spot.

Polesitter Don O'Neal cruised to a convincing victory in the second eight-lap heat race, winning the caution-free race by more than a straightaway advantage. R.J. Conley turned back heavy pressure from Gregg Satterlee in the first half of the race, then pulled away to the second-place finish. Satterlee settled for the third to also earn a feature starting spot.

Second-starting Jimmy Owens outran polesitter Josh Richards to the first corner and pulled away to a straightaway advantage in the caution-free prelim. Richards was second while Walker Arthur held off sixth-starting Dennis Erb Jr. for the third and final transfer spot.