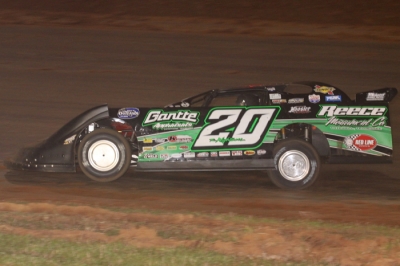 Owens, 40, advanced from the ninth starting spot to run third behind Rick Eckert of York, Pa., and Darrell Lanigan of Union, Ky., by lap nine. He battled with the WoO regulars until overtaking Lanigan for second on lap 27 and Eckert for the lead on lap 30. | Video | Slideshow

A winner of the Saturday-night finale of the PEAK World Finals Presented by NAPA in each of the last three years, Owens controlled the final 20 circuits of the feature to register his fourth career triumph during the season-ending spectacular at the 4/10-mile oval. Eckert crossed the finish line 1.869 seconds behind Owens in second, while Lanigan, who clinched the 2012 WoO championship by entering the weekend’s action, settled for third to remain winless in 19 career starts at The Dirt Track.

Scott Bloomquist of Mooresburg, Tenn., who entered the event tied with Owens atop the alltime PEAK World Finals Presented by NAPA win list, finished fourth after starting from the outside pole and sixth-starter Dale McDowell of Chickamauga, Ga., placed fifth.

A massive crowd watched Owens outduel the 2012 WoO tour’s two biggest winners to pocket a $10,000 top prize. It was his first victory of the season and the sixth of his career on the national tour.

“I know the fans got to see a heck of a race,” said Owens, who piloted Mike Reece’s Cornett-powered Team Zero by Bloomquist car. “It’s not very often you get to see three cars battling for the lead.”

Owens spent nearly 20 laps dicing through lapped traffic with Eckert and Lanigan before finally grabbing the lead from Eckert on lap 30 with a surge to the inside of turn three.

“I think they were both kind of occupied with one another,” said Owens. “Lanigan knew I was there but Eckert didn’t, so we were able to slip up on Eckert and get by him.

“The track was a little heavy early during the heats and we weren’t as good, but I knew that if it dried out we’d be O.K. The track came to us in the feature and we were able to pull it off.”

Eckert, 46, saw his two-race win streak on the WoO tour come to an end. A victor at The Dirt Track for the first time in his career on Oct. 10 when he captured the Circle K World of Outlaws Late Model Showdown, he swapped the lead twice with Lanigan before falling to Owens’s charge.

“Darrell and I had a dogfight there for a while,” said Eckert, who started third in his Team Zero by Bloomquist mount and led laps 15-24 and 26-29. “I heard somebody drivin’ in there into (turn) three under me and I’m like, ‘Here comes Darrell again.’ Then I glanced and it was Owens. I knew we were in trouble then because he started deep so he must have been pretty good.”

Eckert, who won the 2011 WoO championship in a dramatic season-ending event during the PEAK World Finals Presented by NAPA, secured a runner-up finish behind Lanigan in this year’s points standings simply by entering the weekend’s action.

Lanigan, 42, had his bid to extend his single-season WoO victory record to 16 dive-bombed by a tire choice that didn’t quite work out.

“The car was pretty good, but I think we went a little softer on the right-rear than (Owens and Eckert) did,” said Lanigan, who started from the pole position in his Rocket car and led laps 1-14 and 26. “We went all-out for (the win) tonight and gambled a little bit on tires. I guess if we were in a points race we would’ve went the other way.”

Just one caution flag slowed the race on lap four when Chub Frank of Bear Lake, Pa., executed a single spin in turn one.

The 2012 PEAK World Finals Presented by NAPA conclude on Saturday night with a tripleheader featuring the WoO Late Models, the WoO Sprint Car Series and the Super DIRTcar Series for big-block Modifieds. Gates open at 3 p.m., hot laps are scheduled to start at 4 p.m. and racing is set to begin at 5 p.m.

Saturday night’s World Finals program will be televised live by the SPEED cable network from 8 p.m. to 12 midnight ET.

Chris Ferguson pulled alongside Jared Landers in the final corner and won a drag race to the finish line to win the third and final consolation race in a photo finish. Landers led the first 11 laps of the 12-lapper from the pole but couldn't hold off Ferguson's relentless pressure in the closing laps. He settled for second to also make the main event.

Tim Fuller held off Zack Dohm's late charge to win the second 12-lap consolation race in a photo finsh. Fuller got the jump on fellow front-row starter Jonathan Davenport on the initial start and pulled away throughout most of the event. A lap-seven caution closed the gap and Dohm used the low side to overtake Davenport and chase down Fuller. He pulled ahead of the high-running Fuller exiting the final corner, but Fuller nosed back ahead at the finish. They'll both transfer to the main event. A turn-three pileup back in the pack necessitated a complete restart on the first attempt to start the race. Denny Fenton slowed with seven laps complete to bring out the second caution.

Battling back after getting outgunned on the start, polesitter Steve Shaver overtook Ray Cook on lap three during the first of three consolation races and held off a late charge from sixth-starting Brandon Sheppard to score the victory. Sheppard topped a three-car battle with Cook and Dennis Erb Jr. to grab second midway through the caution-free race and pulled alongside Shaver on the final lap. He fell short of claiming the spot but he'll join Shaver in transferring to the main event. Josh Richards rallied from the tail of the field to fourth, but he'll miss the main event.

Polesitter Scott Bloomquist pulled away to victory in the sixth and final heat race while fifth-starting Vic Coffey raced to the runner-up finish in the caution-plagued race. Ross Camponovo made a strong run from 10th to third to claim the final transfer spot. Clint Smith, already in a backup car after mechanical issues in hot laps, ran second early before losing a right-rear wheel. There were a number of cautions for tangles back in the pack, including a frontstretch pileup caused by five-wide action that didn't work out too well.

Dale McDowell outdueled Don O'Neal early in the fifth heat and pulled away through the middle portions of the caution-free 10-lapper. O'Neal settled for second, just ahead of fifth-starting Shane Clanton. Jared Landers moved from seventh to fourth early but couldn't chase down Clanton for the final transfer spot.

Chris Madden cruised to victory in the fourth heat, leading every lap to beat Earl Pearson Jr. by nearly a straightaway. Pearson dropped to third early but retook second from fourth-starting Jonathan Davenport midway through the race. Sixth-starting Bub McCool rallied late in the race to move by a fading Davenport for the third and final transfer spot. Walker Arthur was battling Pearson for third when he slowed with a shredded a right-rear tire and slid into the tour-four wall.

Rick Eckert cruised to victory in the caution-free third heat, winning by a half straightaway over Jimmy Owens while Kent Robinson held off Tim Fuller for the final transfer spot. Owens got the jump on the first attempt to start the race, but it was waved off and he was put back a row for the complete restart.

Polesitter Eric Wells mastered a freshly reworked high side to lead every lap for a convincing victory in the second 10-lap prelim. Jason Feger moved by Tim McCreadie for second on a lap-two restart and held off McCreadie's late challenge to finish second. McCreadie, who started from the outside pole in a backup car, settled for the third and final transfer spot. The race's first caution appeared when Coleby Frye spun with two laps complete.

Race officials took a break in the program following the first heat race to work on the track surface, specifically working to cut down the heavy cushion around the top of the track.

Polesitter Darrell Lanigan grabbed the lead on the start of the first of six heat races and led every lap of the caution-plagued 10-lapper. Steve Francis moved by Steve Shaver on a late restart to claim second while seventh-starting Gregg Satterlee also got by Shaver late to earn the third and final transfer spot. Second-starting Josh Richards, who went to a backup car after mechanical troubles in hot laps, struggled in finishing seventh. Morgan Bagley and Shaver got together exiting turn four on the first lap. Both cars continued running, but Bagley slowed on lap four to bring out the race's first caution. Chris Farrell spun to bring out the race's second caution on lap six. Chad Hollenbeck made a rousing run from 10th to fourth but ended up parked against the turn-one wall on lap seven after appearing to suffer suspension damage after getting into Richards.

Josh Richards, Tim McCreadie and Clint Smith have all pulled out backup cars after suffering mechanical issues during hot laps. All three will retain there outside pole starting positions for tonight’s heat races due according to WoO rules. … Opening ceremonies kicked things off at 5:20 p.m. Late Model heat races will run following two modified consys. … Josh Richards slowed during the first hot lap group with a light trail of smoke following behind his Rocket Chassis house car. … Josh McGuire’s car suffered some sheet metal damage when his right-rear tire shredded during hot laps. … Tim McCreadie of Watertown, N.Y., slowed early during his hot lap run and pulled to the pits. … Timothy Culp of West Monroe, La., was hampered by engine issues during Thursday’s qualifying rounds. His crew located and remedied the problem prior to Friday’s action.