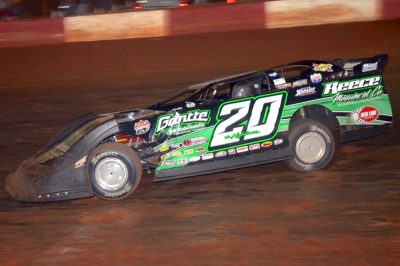 Owens, 40, of Newport, Tenn., rallied from his 13th starting spot in Saturday night’s Lucas Oil Dixie Shootout at Dixie Speedway and was pressuring Chris Madden of Gray Court, S.C., for the lead when Madden broke a left-rear wheel with 47 laps complete in the 50-lap race. | Video | Slideshow

Owens took command after Madden’s demise and led the final three laps with ease en route to earning $10,000 for his sixth Lucas Oil Series victory of the season.

“Our goal for the rest of the year is to win each race,” said Owens, who stretched his lead in the series standings to 475 points with two races remaining. “It was fun and it was a good race. We got to put a good race on for everybody. I hate he broke. We like winning races, but we don’t like to win ‘em that way.”

Jonathan Davenport of Blairsville, Ga., followed Owens across the line in the second position ahead of John Blankenship of Williamson, W.Va., Eric Wells of Hazard, Ky., and Tony Knowles of Tyrone, Ga.

Owens dodged a couple pileups early in the race and climbed to second by lap 33. He cut into the nearly straightaway advantage Madden had built through a 31-lap green-flag run and benefitted from third-running Shane Clanton’s mechanical issues that set up the lap-37 restart.

The two leaders went side-by-side for nearly all of the following 10 laps with Owens nosing ahead of Madden multiple times during the battle. But the low-running Owens couldn’t quite complete the pass on his own as Madden used high-side momentum to pull back ahead each time.

“He would’ve had to bobble for me to get him because that momentum was getting me there on the top,” Owens said. “I was just having to pinch the corners off so much to give him racing room.”

Madden ended up ninth after leading laps 6-47. He felt he had his first Lucas Oil Series victory of the season locked up before his untimely problem.

“I had the preferred line and on the long green-flag runs there, I felt like we were maybe better than he was,” Madden said Madden, who took the lead when second-starting Ray Cook of Brasstown, N.C., pulled to the pit area under a lap-five caution. “He was trying a different line on the restarts and diving in the bottom, but we had the preferred line off the corner. All I had to do was maintain and make sure I didn’t mess up. I thought we were gonna get us a win.”

Notes: Owens drives a Mike Reece-owned Bloomquist Race Car with a Cornett Racing Engine and sponsorship from Reece Monument, Gantte Appraisals, Red Line Oil, FK Rod End and Sunoco Race Fuels. … Owens recorded the 35th Lucas Oil Series victory of his career. … Eight cars were running at the end of the attrition-filled race, which was held in front of a near-capacity crowd at the Atlanta-area dirt track. … One of two early-race pileups was caused when fifth-running Jared Landers scraped the wall on lap six, collecting Scott Bloomquist, Don O'Neal, Steve Francis and Clint Smith among others. … Dixie’s event was the first leg of a Georgia doubleheader for the Lucas Oil Series. Action moves to nearby Rome Speedway on Sunday.