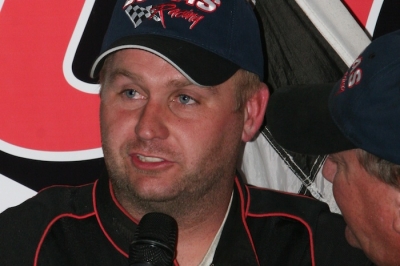 “Norman, I’ll bet he’s really happy. He told me on the way up here, he said, ‘We’ve got another big one coming this year.’ So I guess I better learn to start listening to him,” Marlar said.

Marlar, 34, blitzed the front-row starters on the first lap, fought off early challenges from Steve Francis, then pulled away in the second half of the 25-lapper to earn $7,000 his sixth victory overall of the season.

“My car was really good, and in this condition, my car’s been good lately. I didn’t want to waste any time,” said Marlar, who slipped under polesitter Mark Burgtorf heading into turn one. “Normally, you don’t want to try that hard, but this is a cool place and I wanted to lead all the laps.”

That’s exactly what Marlar did on the second of two preliminary nights of Lucas Oil Late Model Dirt Series action at Knoxville, which uses a points system to set the lineup for Saturday’s $40,000-to-win main event. It was a special victory for Marlar.

“It’s really a historical racetrack, and there’s only a couple of these tracks in the country, or the world even,” said Marlar, who maintained a cushion of lapped cars most of the second half of the race. "Really it’s an honor to win here, and with all the sprint car guys that welcome us into their track, we really appreciate that, they’ve got an awesome racetrack.”

Francis, of Ashland, Ky., won a tight duel with Brady Smith of Solon Springs, Wis., for the second spot and Jimmy Owens was fourth as the top four drivers broke away from the back. Jonathan Davenport of Blairsville, Ga., was a distant fifth after mixing it up with fast qualifier Brian Shirley of Chatham, Ill., throughout the race.

Thursday’s semifeature winner Billy Moyer of Batesville, Ark., wasn’t even in the 24-car field. After struggling in his heat race, he won the night’s C-main but couldn’t start the B-main after his car's radiator sustained damage.

Marlar knows what it’s like to miss a show, too, as his car’s nosepiece rolled under during Thursday’s preliminaries, ending his night early. What was different for Friday?

“Pretty much the front bumper. ... We had a good car. My nose broke and we just got all that repaired last night and worked late,” Marlar said. "Josh Davis there, my help, my crew guy here, he’s a really good boy and stayed up with me all night and got this thing fixed, and we had a good car.”

The lower-running Francis gave Marlar all he wanted early in the race as the pair crossed the start-finish line in nearly a dead heat on the third lap. But Marlar edged ahead by a half-car the next lap, then began stretching his margin as he jumped into the high groove.

Francis steadily slipped back as Marlar maneuvered through lapped traffic and settled for a second-place finish to go with his third-place finish Thursday.

“I guess third and second is not nothing you can complain about,” Francis said. "We just keep adjusting on that thing and we gain a little bit each night. Maybe by tomorrow night we can get her where she’ll turn in the corners like I want. ...

“I threw everything at him I could. I need that (high-side) cushion to be completely gone of the corners, because I can get off the bottom of the corners I think about as good as anybody, but I’m not as good on the top as those other guys are.”

Francis had his hands full with Smith, who pulled alongside a few times but couldn’t grab the runner-up spot.

Marlar, who earlier this month scored a dramatic worst-to-first $25,000 victory in the Hillbilly 100 at I-77 Raceway Park in Ripley, W.Va., would like to click off another crown jewel at Knoxville, too.

“My tires gave up a little bit on me, and we’re going to have to work on our car a little bit,” Marlar said. "Those last few laps — I don’t know if maybe everybody was like that — but I was definitely having to move around in the seat a lot to get the car to work.

The top 20 drivers according to Knoxville’s points system are locked into the first 10 rows of Saturday’s main event with consolation races and provisional starting spots filling the remaining spots in the 30-car field. Lucas Oil Series officials didn’t release the tentative lineup, but according to unofficial point totals, Owens and two-time race winner Scott Bloomquist will start on the front row.

Notes: Marlar’s 2-race-old Rocket Chassis is powered by a Clements Racing Engine and sponsored by Bryson Motorsports, Midwest Sheet Metal, Currin Construction, Convenient Lube, Keyser Manufacturing and SEG. ... Mark Burgtorf of Quincy, Ill., started on the pole, but Marlar ducked under him at the outset as the polesitter was shuffled out of the top 10 on the first lap. ... Outside front-row starter Morgan Bagley dropped to 10th after 10 laps as neither front-row starter contended. ... Fourteen of 24 starters finished on the lead lap and everyone was still running when the checkers fell.