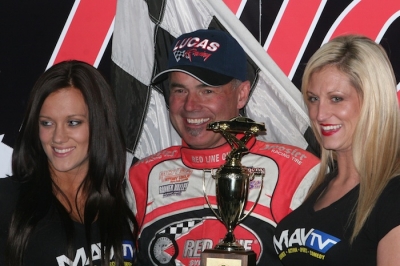 KNOXVILLE, Iowa (Sept. 27) — Returning to his native state and racing at the track where, as a boy, he watched his father race sprint cars, Billy Moyer is always tough to beat at Knoxville Raceway. On Thursday, make that impossible to beat. | Complete Knoxville coverage

The 54-year-old Hall of Famer who has raced most of his career out of Batesville, Ark., dominated the final 17 laps of Thursday’s 25-lap semifeature at the ninth annual Lucas Oil Late Model Knoxville Nationals, earning $7,000 and a staking his claim as one of the favorites for Saturday’s $40,000 winner’s purse.

Taking the lead from protege Shannon Babb exiting turn four on the eighth laps, Moyer turned in a performance that could only leave his opponents marveling as he pulled away by nearly a half-track margin, disappearing from the view of his pursuers.

The runner-up Babb, of Moweaqua, Ill., joked that "when he went by, I’m like ‘Man, that looks pretty good to me.’ ”

Added third-place finisher Steve Francis of Ashland, Ky.: “After the race was over I looked up at the scoreboard to make sure he hadn’t dropped out or something.”

In the first of three nights of Lucas Oil Late Model Dirt Series action at the sprint-car stronghold, Moyer’s performance also begs the question: Can he repeat his three-victory sweep at 2010, a feat that paid $54,000?

With 80 cars entered — the most since the inaugural event in 2004 — Moyer knows he has his work cut out.

“It’s way too early to say ... for sure we’re not going to lay down and say, ‘No, there ain’t no way.’ We’re going to keep trying for sure. But again with the quality of cars here and stuff, it’s definitely a long shot to win here in (2010) when we did all three then, that’s like winning three World 100s right in a row in seems like.

"It’s tough to do, everything has to go your way, and that year and did, and I hope we can do it again. We’ll just have to see if everything pans out. I will say that we’ve come to this race probably more prepared this time, myself, than I ever have. ... I tried to get all my ducks in a row for this race this time, and so far it works well.”

Moyer and everyone else will go at it again Friday in another full-program preliminary night capped by a $7,000-to-win semifeature. The better total of accrued points through Knoxville’s unique format will determine the starting lineup for Saturday’s grand finale.

With Moyer cruising to the checkers Thursday, a tight battle for second raged far behind the leader over the final 10 laps with the high-running Babb turning back challenges from the No. 15s of Francis and former race Brian Birkhofer of Muscatine, Iowa.

The sixth-starting Francis got third with fellow third-row starter Birkhofer in fourth. Jimmy Mars of Menomonie, Wis., advanced six positions to round out the top five finishers. Fast qualifer Scott Bloomquist of Mooresburg, Tenn., the only two-time Knoxville Nationals winner, was sixth and former race winner Brady Smith of Solon Springs, Wis., rallied from 21st to finish a strong seventh.

Moyer knew his car was good even though he never completed a high-speed lap in evening practice, but he was surprised to start third after many top qualifiers — 13 of the top 20 — failed to transfer to the main event through heat races, shuffling the lineup.

“I still don’t understand how they do all these points and flipping and flopping, and somebody said we were in the second row, I said, ‘What!?’ I didn’t even know. I was expecting to be back aways,” Moyer said. “The car was awesome ... I don’t know if we had to start on the front row to win. I think we probably couldn’t have started on the back row and won, but I think we could’ve come through there some. It would drive nice.”

Outside front-row Tyler Reddick, the 16-year-old from Corning, Calif., jumped out to the early lead, swinging around polesitter Denny Eckrich of Oxford, Iowa, while exiting turn four on the first lap. Babb and Moyer took up the chase, getting past Eckrich and stalking the leader before Babb slid underneath Reddick on the sixth lap to grab the lead.

But after the race’s lone caution flew on the sixth lap when Austin Hubbard rolled to a stop in turn four, Moyer quickly went to work on Babb and took command two laps later.

Notes: Moyer’s Victory Circle Chassis has a Clements Automotive engine and sponsorship from Henderson Motorsports, L&D Trucking, J&J Steel, Car City and Watter’s Autoland. ... Denny Eckrich faded to finish ninth. ... While the event was on the Lucas Oil Series, it didn’t offer provisionals as a preliminary night, leaving points leader Jimmy Owens and second-in-points Don O’Neal out of the lineup when they failed to transfer through the B-main. 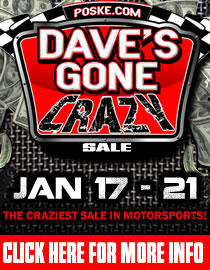