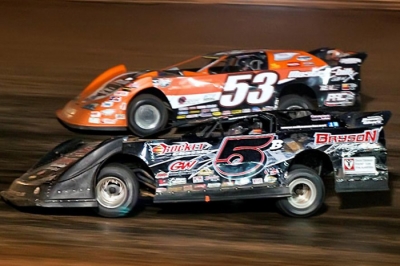 Mike Marlar (5B) takes the second spot from Ray Cook (53) at I-77. (peepingdragonphotography.com)

Realizing he had a provisional starting spot just moments before the race, Marlar rallied from 24th to win the 44th annual Hillbilly 100. His third career Lucas Oil Late Model Dirt Series paid a whopping $25,000 in the first tour event at the track. | Video

“It was my day and it’s hard to stop a guy when it’s his day,” said Marlar, whose first Hillbilly 100 victory came in 2004 at Tyler County Speedway in Middlebourne, W.Va. “I had all the luck and a good car. I was lucky enough I didn’t make any mistakes there. It was a great win from deep in the field and the fans really got to see a good show.”

Pole-starting Don O’Neal of Martinsville, Ind., led the first 76 laps, mostly unchallenged, but when his car started to get loose, Ray Cook of Brasstown, N.C., Brian Birkhofer of Muscatine, Iowa, and a charging Marlar caught up with the leader.

Marlar drove his Norman Bryson-owned Rocket Chassis past Birkhofer, took second from Cook on lap 73, then overtook O’Neal exiting turn four on the 77th lap to take command. He led the rest of the way, surviving a pair of cautions over the final 15 laps for his second Hillbilly 100 victory.

“I just had a really good car,” said Marlar, who was aided by a risky tire choice that turned out to be the right call. “This is one of those places, it is absolutely so slick out there that if you just hit, you’re gonna go up through there. Today was our day.”

O’Neal was disappointed not only to miss out on what would have been his first Hillbilly 100 victory, but also to loose out to a tire gamble.

“He was good enough there wasn’t gonna be no holding him back no matter what we done.,” O’Neal said. “I don’t know what he had on his right-rear, but he took a gamble back there where he didn’t have nothing to lose and it paid off for him.

“When you get beat on tires like that, I hate that worse than anything because it really ain’t the race car that beat. When someone gambles and beats ya like that it’s rough.”

Notes: Marlar's Bryson Motorsports Rocket is powered by a Clements Racing Engine with sponsorship from Andy Stebbins Motorsports, Dave Thomas Foundation, Currin Construction, Keyser Manufacturing, Convenient Lube, and SEG. ... The victory is Marlar's fourth overall of the season, and his second paying at least $10,000. ... For his career, Marlar now has four victories of at least $20,000. ... The race was slowed by six cautions and lasted for just under 51 minutes. ... Series points leader Jimmy Owens of Newport, Tenn., recovered to finish 10th after being involved in a pileup on a lap-11 restart. ... The Lucas Oil Series returns to action Sept. 14-15 with a $20,000-to-win event at Virginia Motor Speedway in Jamaica, Va.