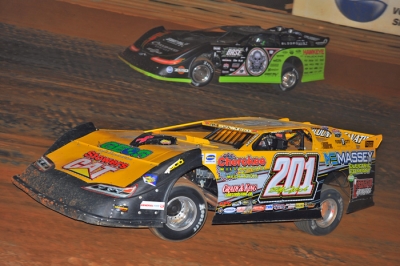 BULLS GAP, Tenn. (Aug. 23) — Billy Ogle Jr. of Knoxville, Tenn., was in a rut of runner-up finishes earlier this season. Then he clicked off a pair of regional-tour victories in east Tennessee. Now he’s really done it.

"Once I fell to second, I just wanted to stay right there with him, and (Bloomquist) left the door open there and that was just enough for me,” the 48-year-Ogle said in victory lane. "I still can't believe I won this.

"I can't thank my car owner Larry Garner enough for giving me the opportunity to drive his car. We have won three-in-a-row now and to beat the best in the business tonight, wow, I don't know what to say. I want to thank my crew chief, David Bryant and all the crew, they did a great job with the car and I just drove it, the track was pretty good tonight and how about this crowd? This is so much fun.”

The previous richest victory for Ogle, a long-time east Tennessee standout with multiple track championships at the now-closed Atomic Motor Speedway near Knoxville, came in 1998 at Tazewell (Tenn.) Speedway with his lone victory on the Hav-A-Tampa Dirt Racing Series.

Bloomquist, looking for his fourth series victory, settled for second after leading 29 of 50 laps at a track he’s dominated most of his career. Don O’Neal of Martinsville, Ind., was third followed by Chris Madden of Gray Court, S.C., and five-time track champ Vic Hill of Mosheim, Tenn. Series points leader Jimmy Owens of Newport, Tenn., was ninth.

Ogle and Bloomquist put on a dazzling display on the high banks over the 50 laps, with Bloomquist leading the first 21 circuits until Ogle made a low-side pass to take command.

Ogle stayed in control for 17 laps before Bloomquist went back ahead on lap 39. Even after Bloomquist got by, Ogle never gave up. He chased the leader back down and eventually overtook the Hall of Fame driver with four laps to go en route to the special victory.

"It feels great to win this, especially to be beat Scott. He’s one of the all-time best,” Ogle said. "He got out in front, but I just bided my time and wanted to stay close to him and when he got behind the (slower car of Ty Dillon), I saw my chance and went for it.”