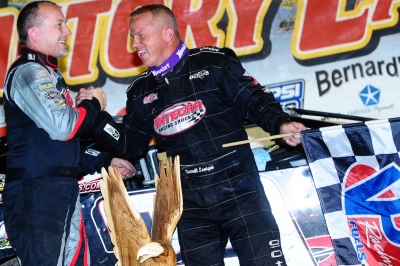 Dominating the richest World of Outlaws Late Model Series event of the season, the 42-year-old star from Union, Ky., rocketed off the outside pole to grab the lead at the initial green flag of the 100-lap A-Main and never looked back. He survived a mid-race challenge from Don O’Neal of Martinsville, Ind., and a final-lap mechanical scare to pocket the prestigious race’s $50,000 top prize.

The triumph was Lanigan’s first in five career USA Nationals starts and gave him 11 WoO LMS checkered flags in 2012, pushing his modern-era (2004-present) single-season win record even higher. It was also his fourth consecutive victory on the national tour, matching the record shared by Rick Eckert of York, Pa. (2006) and Tim Fuller of Watertown, N.Y. (2009).

“It’s definitely awesome to pick up one of the bigger (race) wins of the year,” said Lanigan, whose resume also sports crown jewel victories in the $100,000 Dream at Ohio’s Eldora Speedway and the Dirt Track World Championship at Kentucky’s Bluegrass Speedway (both in 2003). “I think this is one of the top five races in the country, so winning it makes a great season even better.”

Lanigan drove his familiar Cornett-powered Rocket Chassis under the checkered flag 0.554 of a second ahead of Newport, Tenn.’s Jimmy Owens, who outdueled Mike Marlar of Winfield, Tenn., for the $20,000 runner-up check behind the wheel of the Reece Monuments Team Zero by Bloomquist machine. Marlar passed Owens for second on lap 73 but ceded the position back on the 79th circuit and had to settle for a third-place finish in the Bryson Motorsports Rocket.

UMP DIRTcar Summernationals champion Brian Shirley of Chatham, Ill., advanced from the ninth starting spot to place a USA Nationals career-best fourth in his Pierce car and polesitter Frankie Heckenast Jr. of Orland Park, Ill., steered his Rocket mount to a fifth-place finish that marked his best run ever in a crown jewel event.

Lanigan ran without a threat for a majority of the distance in a car he called “unbelievable,” but O’Neal provided some drama for the crowd that packed the three-eighths-mile oval. O’Neal, who started fourth in Larry Moring’s MasterSbilt car, fell nearly a straightaway behind Lanigan early in the event before noticeably closing in as the 100 neared its halfway point.

But just when O’Neal caught Lanigan and appeared primed to make a bid for the lead, he clipped the outside wall in turn one with the right-rear of his car, momentarily slowing his momentum in a shower of sparks. O’Neal gathered himself and was moving in on Lanigan again when contact with the lapped car driven by Scott James of Bright, Ind., sent him spinning between turns one and two on lap 60, bringing out the race’s first caution and forcing O’Neal to restart at the rear of the field.

O’Neal pitted during a lap-61 caution period and returned, but his hopes of a rally ended on lap 76 when he smashed the turn-one wall hard with his car’s right-rear while running ninth. A red flag was put out when O’Neal gingerly climbed out of his heavily damaged machine, but he declined medical attention and rode back to the pit area on a four-wheeler.

“Darrell was fast, but I think we had a pretty good car,” said O’Neal, whose 13th-place finish was still his best in four career starts in the USA Nationals 100. “We ran him down once but then I lost ground when I got into the wall (on lap 54), and then we were running him down again when a lapped car got into me and spun me. I don’t know what that was about, but it didn’t have to happen.

“The crash (on lap 76) was all my fault,” he added. “I was just running hard trying to get back up there and I got high on the front straightaway and just drove into the wall with the rearend. That was a real hard hit — it knocked the breath out of me — but I’m OK.”

“I didn’t really know it because I think once he got close we were running (lapped) traffic so bad right that I didn’t even have a chance to look at signals (from crewmen),” said Lanigan. “I didn’t know anybody was on me.”

Lanigan’s only real worry came on the race’s final lap — a mechanical malfunction that could have proved disastrous.

“You can tell God’s with you out there because we crossed the finish line and broke the (rear) lift bar,” said Lanigan, whose 2012 earnings on the WoO LMS reached $248,100, more than double the total of the next highest driver on the money-won list, after just 28 events. “Sometimes it’s just meant to be. If it had happened earlier, I wouldn’t have made another lap.

“To break at the finish line — it’s unbelievable. When your luck’s behind you, it’s behind you.”

Owens, 40, would have been close enough to take advantage of Lanigan’s problem. He had drawn within a couple car lengths of Lanigan in the final circuits.

“We had a good car,” said Owens, whose best previous finish in three previous USA Nationals A-Main starts was seventh, in 2007. “Darrell was probably just a little bit better than we were, but there toward the end Mikey Marlar showed us a little run on the bottom and I went (to the inside) and was able to reel (Lanigan) in a little bit.

“I should’ve been down there the last 20 or 30 laps and maybe we would’ve had something for him.”

WoO regular Clint Smith of Senoia, Ga., placed seventh despite racing much of the distance with his engine on seven cylinders; Brady Smith of Solon Springs, Wis., was the top-finishing home-state driver in eighth; teenager Bobby Pierce of Oakwood, Ill., took ninth to score his second top-10 finish this season in a 100-lap WoO LMS event; and Eckert rounded out the top 10 after relinquishing fifth place to make a pit stop on lap 76.

Three caution flags slowed the event, including one on lap 61 for Jason Feger of Bloomington, Ill., who stopped in turn one.

The WoO LMS will remain in the Upper Midwest for two more events, visiting Independence (Iowa) Motor Speedway on Monday and returning to Shawano (Wis.) Speedway on Tuesday to run a race that postponed by rain on Wednesday evening.