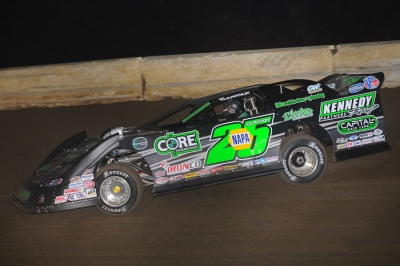 Shane Clanton heads for his first WoO victory of 2012. (jdphotosports.photoreflect.com)

The standout driver from Fayetteville, Ga., made all the right moves in the final laps of the 33rd annual NAPA Auto Parts Gopher 50 Charity Late Model Race, holding off the two hottest drivers on the World of Outlaws Late Model Series to earn a thrilling victory before a standing-room-only crowd. | Video | Slideshow

Clanton, 36, raced three-wide for the lead with Tim McCreadie of Watertown, N.Y., and Darrell Lanigan of Union, Ky., off turn two on the last lap before making a timely dive to the inside of the 3/8-mile oval entering turn three, dulling his challengers’ momentum and preserving his first series triumph of 2012. His win in the kickoff event of the circuit’s Wild West Tour was worth $11,650, including a $1,000 bonus from NAPA.

McCreadie, 38, settled for a runner-up finish in his Sweeteners Plus Warrior, just 0.217 of a second behind Clanton’s Kennedy Motorsports Capital Race Car. The 42-year-old Lanigan had his Rocket machine right on McCreadie’s rear bumper in third place at the conclusion of one of the most memorable three-car races to the finish in the WoO history.

World of Outlaws veterans Chub Frank of Bear Lake, Pa., in a Rocket, and Rick Eckert of York, Pa., in a Team Zero by Bloomquist car, finished fourth and fifth, respectively. They were about two seconds behind the winner at the checkered flag.

McCreadie and Lanigan entered Saturday’s special event, which was co-promoted by the Blooming Prairie (Minn.) Lions Club and Deer Creek’s Queensland family, having won eight of the last 13 WoO races. Lanigan had five of those victories and McCreadie accounted for three.

But while the sizzling Outlaws ran in the second and third positions for the race’s last 21 laps, they were unable to shake Clanton from the top spot. The Peach State star started from the pole position and led the entire distance to secure his car owner, John Kennedy, a first-ever WoO LMS triumph in deserving fashion.

“It feels real good,” Clanton said of defeating McCreadie and Lanigan. “Just being able to keep pace with them two is a big deal because they’ve set a torrid pace the past month, but this night has been coming for us. We’ve been getting closer and closer to a win.

“We started on a roll at the ($100,000-to-win) Dream (June 9 at Ohio’s Eldora Speedway) and carried it over to last weekend (with a fourth-place finish in the Firecracker 100 at Lernerville Speedway in Sarver, Pa). We should’ve had a car that could run second (in the Firecracker), but we got a little tight there at the end of the race and they beat me.”

No one outshined Clanton at Deer Creek. After the race’s lone caution flag, on lap 29, stopped Lanigan’s initial bids for the lead, Clanton withstood an all-out assault from both Lanigan and McCreadie over the final 10 laps to reach victory lane on the tour for the first time since July 19, 2011, at Gillette (Wyo.) Thunder Speedway.

Lanigan, who started sixth and reached second place by lap 22, ducked underneath Clanton several times to no avail before McCreadie used the extreme inside of the track to nip Lanigan for the runner-up spot as lap 48 was scored. McCreadie, who started third, stayed on the bottom of the track and pulled alongside Clanton at the start/finish line with the white flag flying.

But after McCreadie, Lanigan and Clanton stacked up three abreast through turn two on the last lap, Clanton made the move that decided the race. With a sudden charge to the inside of turn three, Clanton shut off his rivals’ hopes.

“With four laps to go I could see (Lanigan’s) nose just a little bit right in the middle of the corner,” said Clanton, who snapped a 36-race winless streak on the WoO LMS with his 16th career victory. “As long as I just kept a good pace I could beat him off the corner.

“(After getting) the white flag I went into turn one and looked left and I see two cars, and I said, ‘Oh, no.’ I seen it was a red car and I knew McCreadie was on softer tires than what we (were running), so going down the back straightaway I said to myself, ‘Just go down there and take their line. You beat ‘em down the straightaway, it’s your racetrack.’

“So I did,” continued Clanton, who joined Lanigan as just the second driver to win at least one WoO race in each season since 2004. “I turned left and just protected the bottom there and didn’t let ‘em get beside me off turn four to beat to the line. I just held my pace and beat ‘em to the line.”

McCreadie attempted to go around the outside of Clanton after having his inside lane blocked, but he slid high and lost traction. Lanigan got bottled up behind McCreadie as well, ending any hope the current points leader had of vaulting from third to first in the final corners.

“He did what you had to do — he covered every lane,” McCreadie, who recorded his 12th top-five finish in his last 14 WoO starts, said of Clanton. “I should’ve stayed where I was at instead of trying to drive through the middle. I should’ve just slowed down even more and crabbed around the bottom. I probably could’ve still nipped him at the line.

“He just came down so fast that I got in the back of him, and when I did I lost the nose. I just couldn’t steer for a second. I got hung behind him in a drift.

“I don’t think anybody expected him to do that,” he added. “I got spooked I guess and slid up the track, and then it was over. We were close (to winning), but that’s not enough.”

The lap-29 caution flag was disastrous for contenders Clint Smith of Senoia, Ga., and Brian Birkhofer of Muscatine, Iowa, who were running third and fourth, respectively, when they were swept up in a backstretch tangle. Contact between several slower cars sent Mike Prochnow of Menomonie, Wis., sideways in front of the leaders, and Smith, who started second and ran behind Clanton until being passed by Lanigan on lap 22, slammed into Prochnow with the right side of his machine. Birkhofer, meanwhile, slid into Smith’s car.

Smith limped into the pit area to have his car’s damage patched up and returned for the restart, but he only managed a 17th-place finish. Birkhofer retired because of his car’s right-rear body damage without completing another lap.