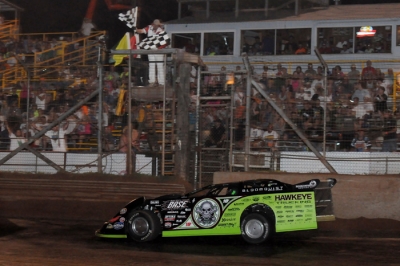 Scott Bloomquist takes the checkers for his $30,000 payday. (Jason Shank)

SARVER, Pa. (June 30) — Scott Bloomquist of Mooresburg, Tenn., was flawless from start-to-finish en route to his second career victory in the Firecracker 100 Presented byGottaRace.com on Saturday night at Lernerville Speedway.

Bloomquist banked $30,100 after crossing the the finish line 1.582 seconds ahead of Lanigan, who was mounting a dramatic bid for victory when he slipped over the four-tenths-mile oval’s cushion between turns one and two on lap 98. Lanigan, 42, lost precious ground to Bloomquist and didn’t have enough time to recover, leaving him a runner-up in the Firecracker 100 for the fourth time in the last five years.

Tim McCreadie of Watertown, N.Y., finished about two seconds behind Lanigan in third, continuing his WoO hot streak in the Sweeteners Plus Warrior. Shane Clanton of Fayetteville, Ga., ran second for more than half the distance but settled for a fourth-place finish in the Kennedy Motorsports Capital Race Car and Dale McDowell of Chickamauga, Ga., placed fifth driving the Team Dillon Warrior No. 41 that 2011 ARCA Racing Series champion Ty Dillon steers in selected events.

Bloomquist started third in his self-built Team Zero chassis, but he needed just a single lap to break into the lead for good. He surged by front-row starters Reddick and Chub Frank of Bear Lake, Pa., who took the green flag from the pole position, for the top spot on lap two and immediately pulled away.

“They just weren’t going anywhere,” Bloomquist said of his quick ascension to the race lead. “Our car was just that good, and I thought, ‘I’m not gonna sit here and mess with this. I’m just gonna go.’ The car really did fire off.”

By lap 35 Bloomquist held an edge over three seconds — nearly a full straightaway — on Clanton, who advanced from the eighth starting spot to second in 14 laps. Caution flags on laps 44 (flat tire on the car driven by John Garvin Jr. of Sarver, Pa.) and 55 (problems for Dave Hess Jr. of Waterford, Pa.) tightened the field, but Bloomquist maintained solid control on each restart and never faced any serious pressure.

The race was certainly not without anxiety for Bloomquist. He battled the tricky Lernerville layout throughout his run in front.

“I love being in the lead — don’t get me wrong,” Bloomquist said. “But leading the race can be taxing on you because you’re looking around — and this place has so many possibilities. I love this racetrack because you can drive it so many different ways. If your car’s not handling, there’s someplace on that racetrack that it should handle. You just gotta find it.

“There were a couple times I slid the car, and when I went in the next corner it was extremely loose. You had to be so intense out there to not slide the tires at all and to just be sure you were picking the right groove around the racetrack.”

Lanigan, who started seventh, made the race interesting during its late stages. The WoO points leader battled his way forward to grab second from Clanton on lap 62 and slowly-but-surely cut his deficit to Bloomquist from over two seconds to just a half-second as lap 96 was scored.

Badly craving a Firecracker 100 victory after finishing second three years in a row from 2008-2010, Lanigan tossed his Rocket machine hard around the outside of the track. Bloomquist was keenly aware of the possibility that the approaching challenger could steal the race.

“I’ll tell you what’s the worst thing that can happen — it’s if you have the most dominant car of the weekend and get beat in the last 10 laps of a race or something happens at the end,” said Bloomquist, who won Thursday night’s preliminary feature and finished second to Dan Stone in Friday night’s headliner. “We were real concerned about that. Tommy (Hicks, Bloomquist’s chief mechanic) was showing me hand signals and I knew somebody was close. I didn’t know who it was though.

“I just had to really get back in the zone and focus on the racetrack and not think about somebody else.”

Bloomquist stayed smooth enough to hold on for his first Firecracker 100 triumph since capturing the inaugural event in 2007. It was his 24th victory on the WoO since 2004 and his tour-leading seventh career win in a 100-lap event.

In addition, Bloomquist joined Jimmy Mars of Menomonie, Wis., as a two-time winner of the Firecracker 100. Mars, who beat Bloomquist to win last year’s event, was not a factor on Saturday night, failing to crack the top 10 before retiring on lap 66 with an overheating engine.

“We’ve been coming to this race every year that they’ve run it and we’ll keep coming as long as they have it,” said Bloomquist. “We enjoying coming up here.”

Lanigan would certainly enjoy competing at Lernerville a bit more if he could finally break through to win the Firecracker 100. He’s become a perennial bridesmaid in the event.

The former WoO champion’s latest Firecracker 100 heartbreak came after he hopped the cushion with two laps to go, ending his hopes of unseating Bloomquist.

“I don’t know about being owed one, but I don’t think we’re meant to win this race,” Lanigan said. “We’ve run second so many times here. But if we wouldn’t have jumped that cushion we were gonna make it awful interesting. I think it would’ve been his ass, but we ran second.”

McCreadie, 38, registered a career-best Firecracker 100 finish and his 11th top-five finish in the last 13 WoO races, putting a smile on his face. But he wondered what could have been had he been able to sneak past Lanigan while the two drivers battled at the back end of the top 10 midway through the race.

“We were good, way better than I’ve ever been here in this race,” said McCreadie, who started ninth. “I thought if I could get by Darrell, maybe we would’ve been the guy up there. But I’d get to him, get beside or even get by him, and the yellow would come out.

“I needed to get by him so I could be in his position the rest of the way through, and then who knows what would’ve happened.”

Mike Marlar of Winfield, Tenn., started fourth and ran in the top five for nearly three-quarters of the distance before settling for a sixth-place finish. Eddie Carrier Jr. of Salt Rock, W.Va., made the biggest advance, scrambling from the 24th starting spot to a seventh-place finish. Jared Miley of South Park, Pa., who started 23rd, placed eighth to earn the highest Firecracker 100 finish ever by a Lernerville regular; Reddick faded to ninth at the checkered flag; and WoO rookie Bub McCool of Vicksburg, Miss., rounded out the top 10.

Fifty-four cars were entered in the final night of the Firecracker 100 weekend.

Morgan Bagley made his long trip from Longview, Texas, worthwhile with a victory in the Uncle Sam 30 non-qualifiers’ race that preceded the Firecracker 100. He beat Boom Briggs of Bear Lake, Pa., to the finish line for a $3,000 prize in his first-ever visit to Lernerville. Bagley’s car also started the main event with Austin Hubbard behind the wheel because Hubbard’s No. 11 was stricken by terminal engine problems, forcing him to start in the rear in another machine.

The Firecracker 100 presented by GottaRace.com will be broadcast as a two-hour special event on the SPEED cable network.