Stone holds off Bloomquist at Lernerville 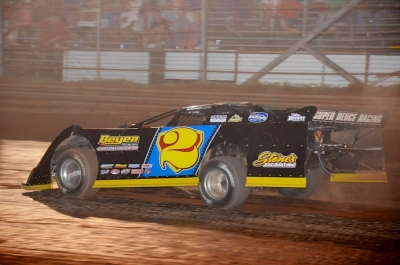 SARVER, Pa. (June 29) — Dan Stone already knew what it felt like to win a World of Outlaws Late Model Series. Now he also knows what it feels like to hold off dirt Late Model legend Scott Bloomquist for a checkered flag on the national tour.

The 35-year-old driver from Thompson, Pa., pulled off another major upset on Friday night, turning back a last-lap challenge from Mooresburg, Tenn.’s Bloomquist to capture the second 30-lap World of Outlaws Late Model Series preliminary feature of the Firecracker 100 Presented by GottaRace.com weekend at Lernerville Speedway.

A true underdog racer who is universally well-liked in the pit area, Stone reached victory lane on the WoO for the first time since his memorable triumph on Sept. 2, 2007, at Tri-City Speedway in Franklin, Pa. His first win came behind the wheel of a car owned by his father Warren, but his $6,000 score on Friday was earned in a Rocket machine fielded by Indianapolis’s Leo Milus and maintained outside Binghamton, N.Y., by noted DIRTcar big-block modified mechanic Randy Kisacky.

“I never, ever drove for anybody before, so it’s pretty awesome when somebody puts their confidence in you to actually pull off something good for them,” said Stone, who is in his second season running selected special events for Milus’s Super Deuce Racing team. “It’s a thrill to run for this team. You’ve got a lot of great minds there and a lot of great people who have been around racing for years.”

Stone, who started third, led the race’s first lap before ceding the top spot to polesitter Brady Smith of Solon Springs, Wis., on the second lap. The friendly racer known as Big Brother slipped back in front on lap three and was never headed in an event that ran caution-free from start to finish in just 9 minutes, 37.558 seconds.

Bloomquist, 48, advanced from the ninth starting spot to place second, 0.459 of a second behind Stone at the finish. He was bidding to become the first driver to win both Firecracker 100 preliminary features since the three-night format was launched in 2010.

Smith, 35, settled for a third-place finish driving a Team Zero car built by Bloomquist. Second-starter Tim McCreadie of Watertown, N.Y., was fourth in the Sweeteners Plus Warrior — his 10th top-five finish in the last 12 WoO events — and 16-year-old Tyler Reddick of Corning, Calif., registered a career-best WoO finish of fifth.

Stone survived a frantic late-race charge from Bloomquist, who broke into second with a lap-19 pass of Smith and caught Stone with three circuits remaining. Bloomquist pulled to the outside of Stone rounding turns three and four on lap 28 and again heading toward the white flag, but Stone stayed ahead at the line each tour.

Bloomquist attempted to drive to the inside of Stone exiting turn two on the final lap, but Stone dulled Bloomquist’s momentum just enough on the backstretch to provide the breathing room necessary to reach the finish line first.

“I never actually saw (Bloomquist), but we were in a whole bunch of lapped traffic and all of a sudden I could hear somebody,” said Stone, who began the 2012 season hoping to chase the WoO Rookie of the Year award but was forced to curtail his travel plans after a rash of engine woes during the tour’s February swing through Georgia and Florida. “It sounded like they were on the outside, so I just kind of got wider and used up more of the straightaway — just to try to use up as much real estate as I could.”

The victory assured Stone of a pole position start in one of six heat races scheduled for the Saturday finale of the Firecracker 100 weekend. A $30,000 first-place prize will be on the line in the sixth annual event.

“We were horrible last night,” said Stone, who finished 20th — the last driver on the lead lap — in Thursday night’s 30-lap A-Main. “Watching us last night you wouldn’t think we’d ever win a race this year, but we made a lot of changes today and they were right. I think we can actually make the car better for (the Firecracker 100).”

Bloomquist, who will also start from the pole in a heat on Saturday night, feels good about his chances of winning the Firecracker 100 for the second time in his career.

“The car was real good again tonight,” said Bloomquist. “I’d like to have had a few more laps out there tonight, but that’s the way it goes. We went with a little different tire combination and it took a little while to come in.

“We played with the car just a little bit tonight — nothing much — and I like what I felt. I think we’re in pretty good shape for tomorrow as long as we don’t have any bad luck.”

WoO points leader Darrell Lanigan of Union, Ky., had a rare off night in the midst of his spectacular campaign, finishing a season-worst 21st after using a provisional to start the A-Main from the 25th spot.

Fifty-six cars were signed in for the program, which was slowed by a batch of light rain that began falling toward the end of Ohlins Shocks Time Trials. The start of heat racing was delayed 90 minutes to 9:30 p.m., but through the cooperation of officials and racers the entire show was completed by 11 p.m.

Reddick was quickest in qualifying with a lap 16.386 seconds to earn his first-ever WoO LMS fast-time honor. At the age of 16 years, 5 months and 18 days, he’s the second-youngest driver in history to set fast time at a WoO event, falling just short of Josh Richards, who was 16 years, 4 months and 13 days old when he was fastest on Aug. 3, 2004, at I-35 Speedway in Mason City, Iowa.

The Firecracker 100 presented by GottaRace.com concludes on Saturday with a full day of activities. Following an afternoon of prerace entertainment that includes driver-fan horseshoes and cornhole tournaments at noon and a huge driver autograph session at 4 p.m., six heat races — lined up using entrants’ best finish from the two preliminary programs — are scheduled to begin at 7:30 p.m.