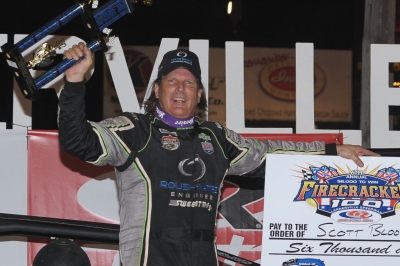 Mastering a slick, multi-groove track on a scorching summer evening, Bloomquist, 48, ran down Marlar and swapped the lead once with his fellow Volunteer State resident before securing the top spot for good on lap 27. The former WoO champion pulled away over the final circuits to defeat Marlar by 1.357 seconds.

Shane Clanton of Fayetteville, Ga., finished third after running behind Marlar in the second spot throughout the race’s first half. The hottest drivers on the WoO entering the weekend, Tim McCreadie of Watertown, N.Y., and Darrell Lanigan of Union, Ky., were contenders but settled for finishes of fourth and fifth, respectively.

Bloomquist’s $6,150 victory was his 23rd on the WoO since 2004 but first since he was triumphant in the second preliminary feature of last year’s Firecracker 100 spectacular. With the win, the national tour’s 2004 champion assured himself a pole position starting spot in a heat race on Saturday when he will attempt to pocket the Firecracker 100’s $30,000 top prize for the second time his career.

“The car was really good all over the racetrack,” said Bloomquist, who won the inaugural Firecracker 100 in 2007. “It seemed like it was a little bit off initially, but generally our car gets better with time, and the longer I run it usually just gets better. That makes me feel pretty good about what’s coming in the 100-lapper on Saturday.”

Bloomquist started eighth in his Roush-Yates-powered machine but was up to fifth on lap five when the race’s only caution flag flew, for a turn-one spin by polesitter Ron Davies of Warren, Pa., who lost control while battling for third place with Chub Frank of Bear Lake, Pa. He surged to third on the restart and chased Clanton until his inside thrusts moved him to second on lap 17.

Bloomquist quickly caught Marlar’s Bryson Motorsports Rocket car and nosed ahead to lead lap 23, but Marlar fought back on the outside and regained command the following circuit. Marlar vaulted off the top of turn four to lead laps 25 and 26 by inches over Bloomquist, but a turn-two scrape with the lapped car driven by Coleby Frye of Dover, Pa., slowed Marlar ever-so-slightly and allowed Bloomquist to slide ahead to stay.

I got in (lapped) traffic and those guys were all racing hard and I was trying to get by them,” said Marlar, who grabbed the lead at the start from outside the front row. “One of the lapped cars got under me a little bit and had my wheels off the ground after I passed him (Frye clipped Marlar’s left-rear quarter-panel when he slid back onto the track after jumping the berm in turn two), and Scott just cleared me then.

“It’s just one of them things. Scott was good; he obviously passed some cars to get up through there. I think he was better than me, but I also think that maybe I could’ve got through traffic a little better if those guys would’ve cut me some slack and then I probably could’ve held him off for a couple more laps.

“I think I had the preferred line,” he added, “so if I could’ve cleared that last guy there I think we probably would’ve been OK. But congrats to Scott. We wanted to win, but we still had a good finish.”

The runner-up finish was a career-best on the WoO for the 34-year-old Marlar, who made his first start on the tour since dropping off as a regular following the second of three Memorial Day weekend events.

The race ended up materializing much the way Bloomquist had envisioned it would.

“I didn’t have to depend on the cushion coming off of (turn) four like the rest of them kind of had to,” said Bloomquist. “I knew if we could come off right in the middle and run with them, the longer the race went on, I knew we’d be pretty good.

“I was just hoping lapped traffic kind of played out for me. I got in behind one guy that went to the bottom and got way sideways (on lap 25), and I thought that was gonna be the one that killed me for the night because I thought the race was close to over. I guess there were a few more laps left than I thought. We just got by (Marlar) and got back down.”

Clanton, meanwhile, skipped from the fourth starting spot to second on lap two and drew within striking distance of Marlar but couldn’t muster a serious bid for the lead. He ultimately lost second to Bloomquist on lap 17 and finished three seconds behind the winner.

“I thought I had something for Mike after that caution (on lap five),” said Clanton, who drove the Kennedy Motorsports Capital Race Car to his sixth WoO top-five of the season. “He got out there and I started running him down, but then we caught lapped traffic and I couldn’t steer no more. We got third, though, and that’s a good starting spot for a heat race on Saturday so we’re pumped.”

Jamie Lathroum of Mechanicsville, Md., topped the 56-car field in Ohlins Shocks Time Trials, turning a lap of 16.010 seconds in his second career Firecracker 100 weekend appearance. His second career WoO fast-time came less than one month after his first, on May 31 at Delaware International Speedway.

The Firecracker 100 presented by GottaRace.com continues on Fri., June 29, with another WoO program topped by a 30-lap A-Main paying $6,000 to win. Drivers will use their best finish from the Thursday and Friday competition to align themselves in Saturday night’s Firecracker 100 heat races.