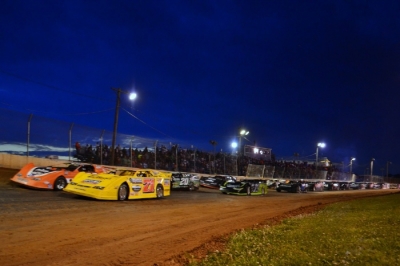 The field forms just after dusk at Florence Speedway. (sraracingphotos.com)

O’Neal started on the pole and was never challenged, leading by a half-straightaway margin most of the distance of a race slowed by four cautions. | Video | Slideshow

“To win this race the way the racetrack’s slick, and to outrun the guys you outrun, you’ve done your work,” said O’Neal, who won the Latham Memorial for the second straight time and third of his career.

While O’Neal racked up another checkered flag on the national tour, he didn’t gain many points on reigning series champion Jimmy Owens of Newport, Tenn., who posted another runner-up finish.

“As long as we keep winning races, that’s all that counts,” O’Neal said. "Hopefully one of these nights Jimmy’s gotta have a bad night. You can’t make up nothing on that guy when he’s running second.”

After Ray Cook’s battery failure ended his night on lap 29, Owens took up the chase of O’Neal and cut his half-straightaway margin in half with 10 laps remaining. But after creeping a bit closer, O’Neal stretched his margin out a little more and was never in serious danger.

Yellow flew for a lap-four caution, a turn-four scramble that saw Earl Pearson Jr., Jared Landers, Darrell Lanigan and Mike Jewell get stacked up. Landers spun for a lap-11 yellow, then Dustin Neat spun on lap 23 in turn two. Cook, who started outside the front row and held the second spot through the first half of the race, sputtered to a stop just past the halfway point to draw the final caution.

The series will return to Florence in August for the Sunoco Race Fuels North-South 100, a race O’Neal has narrowly missed and definitely has his eye on. Saturday’s 50-lapper served as a tuneup.

“I just started off fairly tight, and the longer we ran, it got to steering better,” said O’Neal told fans from victory lane. "With 100 laps, maybe, we probably would’ve had a good car.

“I can’t wait to come back. I appreciate all of you, thanks!”