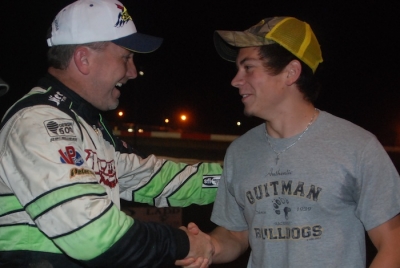 Jimmy Owens (left) won a new car for himself, and one for fan Matthew McRae. (DirtonDirt.com)

LOCUST GROVE, Ark. (May 19) — While waiting for his victory lane interview at the edge of Batesville Motor Speedway’s hillside grandstands, Jimmy Owens tapped his 3-year-old son Nathan on the shoulder and pointed to silver Chevrolet Camaro in victory lane.

“Nathan, how do you like your new car?” Owens asked the boy, who has a few years to go before getting a driver’s license. | Notebook | Video | Slideshow

But if he’s anything like his Daddy, he’ll be a whale of a driver.

The victory was also a windfall for 19-year-old Matthew McRae of Quitman, Ark., who won a 2012 Ford Mustang. Through a special fan drawing set up by promoter Mooney Starr, McRae was paired with Owens for the feature race and pocketed the keys to a new automobile after cheering him to victory.

“I’m sure you were as nervous as I was those last few laps,” Owens joked with McRae in victory lane after they shared a congratulatory handshake.

The victory was the first of the season for Owens, who stretched his points lead to 300 over Don O’Neal of Martinsville, Ind., whose two-race win streak ended with a fifth-place finish.

The winner’s long-term plan is to keep the Camaro around for a dozen or so years so it can be Nathan’s first car. The youngster seemed to enjoyed it after climbing into it in victory lane, immediately testing the horn with a couple of beeps and blaring the radio. Just wait until he can reach the pedals.

“It is pretty cool. We race for money and trophies, and to have a trophy like that, it’s pretty cool,” Owens said. "It’s the first time I’ve ever actually raced for anything other than purses. ... We had a good time, we had a great car, we got to race against two of the best guys in the country, and had a great time.”

Owens had a half-straightaway lead on Moyer with 15 laps remaining that was cut to just a five lengths, but he was never seriously challenged in wrapping his 30th career series victory and first since Oct. 9, 2011, in Rome Ga.

Racing in his hometown, Moyer settled for second — and a lucrative $20,000 payday in a rare race where the runner-up cashes a bigger check than the winner — while the 13th-starting Bloomquist ended up third after a position-swapping battle between the two after the final restart. Wendell Wallace of Batesville finished fourth with O’Neal fifth. Brian Birkhofer of Muscatine, Iowa, started 11th and ran as high as third before fading midway through the race and dropping out after contact with John Blankenship.

Moyer started on the pole alongside Owens and led the first 11 laps, but Owens went underneath in turn three just a lap before the first yellow appeared for Jimmy Mars and his flat right-rear tire. While Moyer challenged in traffic at the halfway point and again in the closing laps, the lap-12 move turned out to be the winning pass.

“I wanted to move to the front pretty quick, and I was kind of iffy, because everybody was blowing tires and I knew tire wear was probably going to be an issue,” said Owens, adding that his tires endured with aplomb.

“When I got to the front I wanted to jump up and set a little bit slower pace. I was able to keep ‘em all held off the whole race. We had a good car and I think maybe we could’ve pulled away from ‘em if they’d have challenged us very hard, but you never know.”

Moyer never fell completely out of touch with Owens, but he lamented losing the lead during the early stages of the 98-lap feature.

“He got by me there early in the race. I wasn’t real worried at that time, but I should’ve been, and maybe should’ve run a little bit harder at that time, because it got more harder and harder to pass. Who knows? I just should’ve tried to stay in the lead and maybe it would’ve been different, because I think it have been harder for him to try to pass me, too,” Moyer said. “His car was more maneuverable than mine, for sure. He could turn and get around better than I could. He might’ve drove right by me any time, I don’t know. But we had fun.”

As his crew reminded him when he returned to the pits, the $20,000 payoff for second was a nicer consolation prize than most races.

Bloomquist, who mixed it up with Moyer in the late stages, felt he could’ve run harder than he expected at a track where tire wear is often critical.

“We finally, at the end, we got going, and whether it was very noticeable or not, the last three or four laps I finally started just letting the tires spin and got enough heat in ‘em that the last three or four laps, we were three- or four-tenths quicker than the leaders,” Bloomquist said. “I’m like, ‘Aw, man, I could feel it coming and feel it coming. ... I’m going to run out of laps.’ That’s just the way it goes. Jimmy ran good. Those guys got to start up front. They didn’t really have to abuse their tires to get to the front.”

Owens was glad to keep two of the sport’s titans behind him in notching his second career Late Model victory at Batesville.

“It’s pretty sweet,” said Owens, who won Batesville’s Topless 100 in 2009. "Those guys helped evolve everything to where it’s at, and to get to race those guys and race for the win, it’s just something I won’t ever forget and I’ll cherish forever. Even the win, but getting to race with those guys, it’s just awesome.”

The race was slowed by five cautions, the most serious on the 24th lap when Earl Pearson Jr.’s car went up in smoke heading into turn one, triggering a chain-reaction accident that involved Austin Hubbard, Tyler Reddick, Jesse Stovall and Shane Clanton.

Besides the first yellow for Mars, who rallied to salvage a sixth-place finish after starting 19th, Shane Clanton slowed with a flat tire on lap 19 and Hubbard spun in turn two on lap 70. Birkhofer’s demise on lap 75 was the final slowdown.

Notes: Owens drives a Bloomquist Race Car with a Cornett Racing Engine; his Mike Reece-owned team is sponsored by Reece Monument, Gantte Appraisals, Red Line Oil, FK Rod End and Sunoco Race Fuels. ... A dozen drivers completed 98 laps and 17 of 24 were running at the finish. ... Several drivers made pit stops to change rubber. ... Among drivers failing to make the feature lineup: Terry Phillips (broke motor after starting on pole of consolation), Eric Jacobsen (damage after scrape with Klint Byars in consy), Byars (fell from contention after scrape), Ray Moore, Timothy Culp, R.C. Whitwell, Duke Whiseant (hit turn-four wall in consy), Stacy Tyler (slowed after starting on pole of consy), A.J. Diemel, Eric Turner, Chris Wall, Jeff Chanler (spun on backstretch in consy), Jeff Floyd, Jon Kirby and Brandon Smith (part of three-car collision in consy). ... John Blankenship was leading the first consy when he lost control and hit the turn-one wall. His car slowed rolled over after hitting the concrete but he wasn’t injured and started the feature in a backup car using a series provisional. ... Eric Wells also broke a rear end in a consy but took a provisional. ... Lucas Oil competitors traverse the Ozarks for the next tour race at Lucas Oil Speedway in Wheatland, Mo., which hosts the $30,000-to-win Dart Show-Me 100, a race that will be televised in June on CBS Sports Spectacular.