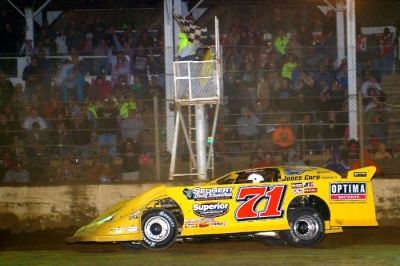 BROWNSTOWN, Ind. (March 24) — Don O'Neal thought his biggest challenge Saturday night would be starting on the tail of his heat race after breaking an engine in time trials for the 15th annual Indiana Icebreaker.

But after chasing reigning Lucas Oil Late Model Dirt Series champion Jimmy Owens through the first half of the night's 50-lap feature, O'Neal found even a bigger challenge at his home track. | Notebook | Sidebar | Video | Slideshow

"I really didn't think I had anything for Jimmy," said the 47-year-old Martinsville, Ind., driver. "It was all I could to just sort of keep up with him."

But as the frontrunners worked lapped traffic in the second half of the race, Owens suddenly became vulnerable, allowing the sixth-starting O'Neal to pull alongside for a side-by-side battle beginning on lap 32. The leaders battled back and forth before O'Neal took command for good on lap 36, then pulled away for a $10,000 victory, his third of the season and 22nd of his career on the national circuit.

"After all these years, there's nothing like it, especially winning at this place," O'Neal said in victory lane after his 52nd career victory at Brownstown and fourth in the Indiana Icebreaker. "I must be getting old or something. I appreciate all the fans here ... I love coming to this place."

Cheers interrupted the MasterSbilt Race Cars house car driver in victory lane as he gave another wave to the packed grandstands on a beautiful night with a raceable track surface despite heavy Friday night rains that muddied the Jackson County Fairgrounds.

"To be able to unload this other car and start on the tail of a heat race and have the run we did in the heat race, and to win the feature, says a lot about this MasterSbilt bunch," said O'Neal, who was forced out of his primary car following time trials.

Owens, who had a slow start at Florida Speedweeks, matched his best finish of the season in second while seventh-starting Greg Johnson of Bedford, Ind., made a late charge to finish third. Fast qualifier Steve Francis of Ashland, Ky., who nearly lost control in turn two on the first lap after catching a rut, survived to finish fourth ahead of Jonathan Davenport of Blairsville, Ga., the Clint Bowyer Racing entrant who scored a top-five finish in his Brownstown debut.

Two-time Lucas Oil champion Scott Bloomquist wasn't a factor, but after his car got banged up in a heat-race accident, the provisional starter rallied from 23rd to eighth to earn Optima Batteries Hard Charger honors at the quarter-mile oval where he'd won three consecutive Lucas Oil Series events.

The polesitting Owens looked strong early, staying in control through a pair of early restarts after cautions for a spinning Jared Landers on lap three and for Mike Marlar, who slipped over the turn-two banking on the ninth lap.

With 25 laps down, the top four of Owens, O'Neal, Francis and Davenport were evenly spaced on the straightaways as the leaders headed toward heavier lapped traffic. Owens had the slower car of John Blankenship between his No. 20 and O'Neal's No. 71 on lap 32, but O'Neal roared off turn four to get by Blankenship and suddenly give Owens his first challenge.

"That's all I could do was keep him in sight. I mean, he'd drive off from me there early a little bit, and it got to where I could sort of stay with him," O'Neal said. "It seemed like all at once he started slowing down. We had the same tires one and I really didn't expect him to do that at all.

"It seemed like we struggled with a lapped car or two, but we could get through 'em pretty decent, better than we have been the last few times we've been here. And that's what paid off for us."

"He's got a good car and, you know, it took him longer to get there when I thought it would, because I was just sitting there (saying), 'C'mon man, I can't get by these guys? Well, maybe (O'Neal) can't either,' " Owens said. "We got in that lapped traffic and we just couldn't go as good once we got to the cars and got a dirty track ... I wasn't able to maneuver around like I could before. I don't know if our tires sealed over or maybe Don had a better tire, but he had a good car tonight."

With O'Neal on the inside and Owens on the outside, the duo ran mostly side-by-side for four laps before coming upon the slower car of Dillan White on the backstretch. Owens took the outside route past White, but O'Neal beat him to the punch on the inside, winning the drag race into turn three.

Owens tried a crossover move, diving into turn one beneath O'Neal, but that was was close as he'd get the rest of the way, despite O'Neal briefly slipping over the backstretch and losing momentum in the late stages.

"The cushion kept getting further and further out, and like I said, when I caught those cars, we just lost all the drive we had and we just couldn't get on past 'em," Owens said. "We could get to 'em, but we couldn't get by 'em."

Further back, Johnson was hoping for a caution after finally getting his Jack Rainey-owned No. 49 in gear in the second half of the race. The Brownstown veteran said it took him too long to pack down his preferred groove in the inside lane.

"Finally I got it going, and I finally got the racetrack ran in, and then I started going," said Johnson, who slipped by Francis for third on the final lap. "I tell you, I felt I was ... I felt all I needed was a caution, but it didn't come."

Francis, a two-time series winner at Florida Speedweeks like O'Neal, said he thought suspension damage hampered his run after his first-lap misfortune.

"We won our heat, started on the outside pole and drove into (turn) one and all but turned over, really," Francis said. "I think we bent a panhard bar a little bit or something, because the car just didn't react the same as it had all night long."

Notes: O'Neal's Jay Dickens-powered MasterSbilt is sponsored by Optima Batteries, Independence Lumber, Seubert Calf Ranches, Super Cleaning, Jones Core and Budda Bert Transmissions. .... The race was sponsored by the Bowman Auto Group. ... The Indiana Icebreaker is seemingly always plagued by wet weather, and this year was no different with heavy rain 24 hours before the race. But promoter Tim Keithley and his crew brought out heavy equipment to work the racetrack and pit lanes, allowing the race to go on. "The racetrack was a little rough up there on the top, but other than that, for all the rain we had, it turned out pretty good," O'Neal said. ... The runner-up finish for Jimmy Owens moved him into a tie for the points lead with Dennis Erb Jr., who started 12th and finished sixth. ... Tim Isenberg of Marshfield, Wis., had a solid seventh-place finish. ... Two-time World of Outlaws champion Josh Richards of Shinnston, W.Va., made his first Brownstown appearance in several years and finished 12th in the Ernie Davis-owned No. 25 Rocket Chassis. ... Chris Simpson of Oxford, Iowa, ran in the top five in the first half of the race before slipping back to ninth. ... Fellow Longhorn Chassis driver Earl Pearson Jr. of Jacksonville, Fla., who debuted a new car, was 10th. ... Among drivers failing to make the feature lineup: Duane Chamberlain, Justin Rattliff, Zak Blackwood, Michael Chilton, Jerry Rice, Tim Prince, Eric Wells and Joe Janowski. ... Next up for the Lucas Oil circuit is the March 30-31 weekend at Jackson (Miss.) Motor Speedway and Lone Star Speedway in Kilgore, Texas.