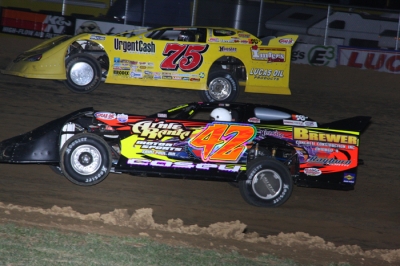 BROWNSTOWN, Ind. (March 29) — Terry Casey has shown his throttle-mashing abilities on heavy surfaces. He's not bad on a drier track, either.

Casey broke into the top five by the 13th lap, was up to second for a lap-20 restart, then outdueled the 13th-starting Hartman through the middle stages of the race to take command. Polesitter Justin Rattliff of Campbellsville, Ky., who led the first 17 laps before giving up the lead to a high-running Hartman, rallied to finish second, but he was nearly a half-track behind the winner.

Hartman was third ahead of Earl Pearson Jr. and tail-starting Steve Casebolt on a chilly night where five cautions tainted the first 20 laps. The final 30 laps ran caution-free.

Rattliff broke into the lead from the outset and stayed ahead of a flurry of action behind him where top-five positions were seemingly traded every lap. Ratttliff had a half-straight margin when the first caution appeared on the seventh lap, and he led John Gill, Wes Steidinger, Rohn Moon and 11th-starting Don O'Neal back to green. O'Neal bolted into second on the eighth lap and held that spot when Kevin Claycomb's turn-three spin brought out the a lap-12 caution. Moon pitted to change a tire during the caution.

On the restart, Hartman jumped to the high side and went from eighth to second in four laps, holding that spot on a lap-16 caution for a turn-two scramble triggered by Brian BIrkhofer's spin. Hartman continued his charge on the restart, pulling alongside Rattliff on the frontstretch on the 18th lap and taking command on lap 19.

But the fifth and final caution on the 20th lap stalled Hartman's momentum, and Casey was poised in his second position with Rattliff, O'Neal and Pearson in the top five.

Hartman couldn't pull away from Casey on the restart, and the eventual winner moved past on the 24th lap. Hartman nearly pulled even with Casey at the crossed flags, but Casey began building a lead that was more than a quarter-track margin by the finish. Rattliff slipped back to fourth on the final restart but gathered up his car, regaining second on the 28th lap from Hartman, who faded with softer right-side tires than any driver in the field.

In the first heat, Chinn inherited the lead when frontrunning polesitter Rohn Moon spun in turn four and collected second-running John Mason. Chinn led the rest of the way while Moon stormed back from the tail to finish second over Bart Hartman. The top three cars in each heat transferred.

In the second heat, Rattliff eased away from reigning series champion and polesitter Earl Pearson Jr. for the victory while Dan Schlieper finished third. Gill survived a first-lap bump with polesitter Kevin Claycomb exiting the second turn to dominate the third heat. Claycomb, in his first race at Brownstown since retiring in 2004, recovered to finish second ahead of Cody Mahoney, who fought off a stiff challenge from Dennis Erb Jr.

The fourth heat was hampered by three first-lap accidents, including two involving Michael England and one when Scott James spun in turn four. Zach Carney also slammed into a first-turn tire barrier and collected Rick Aukland and Curt Spalding. When the race finally got rolling, polesitter Matt Miller edged away from Brad Neat for the victory while Terry Casey, who nearly overtook Neat at the white flag, was third.

Birkhofer ran off to an easy victory in the fifth heat over Don O'Neal and polesitter Brady Smith. Steidinger did the same in the sixth heat to outdistance fellow Illinois drivers Ryan Dauber and Billy Drake. Polesitter Damon Eller ended up fourth.

Prelims notes: Former track champion Mike Jewell started on the pole of a consolation race but faded from contention as third-starting Dennis Erb Jr. won. ... In the second consolation, Steve Barnett won while Mike Marlar overtook polesitter Michael England in the closing laps for the second and final transfer spot. ... Jacob Webber got into the backstretch wall in the second heat. ... Justin Shaw pulled to the infield with problems early in the fourth heat, then decided to pull off the track during a caution period. However, he didn't have a firm grip on his helmet and it rolled onto the frontstretch as he headed for the turn-one exit. A glove also fell on the track and was retrieved by a track official. ... The fifth and sixth heats ran caution-free.