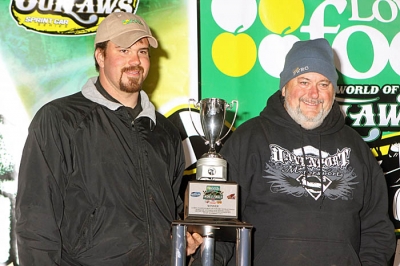 The 28-year-old star roared off the outside pole to lead from start-to-finish in the caution-free event, which was contested before a huge crowd of over 14,000 fans. He was never seriously challenged en route to a $10,000 triumph that pushed his earnings over the past seven weeks to $65,000. | Complete World Finals coverage

“This just feels great,” said Davenport, who has won six times since his Barry Wright Race Cars factory team debuted a new house car in late September. “This hot streak has just been a huge confidence booster for myself and the team. We finally got our stuff back on track and now we’re rolling.”

Steve Shaver of Vienna, W.Va., hustled forward from the eighth starting spot to finish second in the K&L Rumley Rocket machine, a distant 5.761 seconds – more than a straightaway – behind Davenport at the checkered flag. He passed Dale McDowell of Chickamauga, Ga., for the runner-up spot on lap 27 but couldn’t get close to Davenport.

Two-time defending WoO champion Josh Richards of Shinnston, W.Va., finished a quiet sixth, but the run pulled him within two points of York, Pa.’s Rick Eckert in the tour standings. Eckert, who finished 12th, will attempt to hold off Richards for his first-ever World of Outlaws title in Saturday night’s season-ending World Finals program.

Davenport captured the first full-fender event of the Lowes Foods World Finals doubleheader for the second-consecutive year. His victory in the 2010 opener marked his first-ever win in WoO competition.

The driver known as ‘Superman’ was flawless in romping to his second career win. He outgunned Hubbard for the lead at the initial green flag and simply dominated a race that took just over 14 minutes to complete.

“Our car was really good,” said Davenport, who registered his fifth top-five finish in 10 WoO starts this season. “I don’t know of anything I would change. But tires were a big deal too, and I think we had everybody out-tired. We were quite a bit harder than everybody else.”

While Davenport will bid on Saturday night to become the first driver in Lowes Foods World Finals history to sweep both WoO Late Model Series features, he will share the stage with the dramatic battle between Eckert and Richards for the national tour’s $100,000 title. The veteran and the accomplished young gun ended Friday’s action separated by just a single position.

Eckert entered Friday’s show with a 14-point advantage on Richards, but it appeared that Richards was in the driver’s seat when he started the feature race from the fifth spot and Eckert took the green flag from 18th. Richards was unable to gain any ground, however, while Eckert managed to pick up a half-dozen positions without the benefit of a field-tightening caution flag, allowing Eckert to maintain a points lead he has held since early May.

“It would’ve been nice if we had a caution, but that’s the way it goes some nights,” said Eckert, who avoided falling into a tie for the points lead when he reached 12th place with a lap-41 pass of Corning, Calif.’s Tyler Reddick. “My car was good, and I think my tire choice was better than most. As the race went on, we progressively got better.”

Eckert said he will go into Saturday’s deciding program with a no-pressure approach.

“If we tie, (Richards) wins (on the wins tie-breaker), so we gotta beat him,” said Eckert, who is seeking his first national title since winning the UDTRA series crown in 2002. “It’s pretty simple, and we’re confident we can do it. We’re as prepared as we can be, so we just have to go out there and give it our best shot.”

Richards, who has come out on top of close points races during the last two World Finals, is also ready to battle it out with Eckert for the championship.

“Whatever happens tomorrow is meant to happen,” said Richards. “We’re gonna race hard not matter what. This might be my last shot at it (he is expected to run fulltime on the NASCAR Camping World Truck Series in 2012), so hopefully we can win it. I know Eckert really deserves it too, but I’m gonna do everything I can to win it.”

Finishing in positions 7-10 were sixth-starter Scott Bloomquist of Mooresburg, Tenn., who moved to fourth on the opening lap but lost several position when he slipped high on lap three and never recovered; Dennis Erb Jr. of Carpentersville, Ill.; Vic Coffey of Caledonia, N.Y.; and Jimmy Owens of Newport, Tenn.

The 2011 Lowes Foods World Finals conclude on Saturday night with a tripleheader featuring the WoO LMS, the WoO Sprint Car Series and the Super DIRTcar Series for Big-Block Modifieds. Gates open at 3 p.m., hot laps are scheduled to start at 4 p.m. and racing is set to begin at 5 p.m.