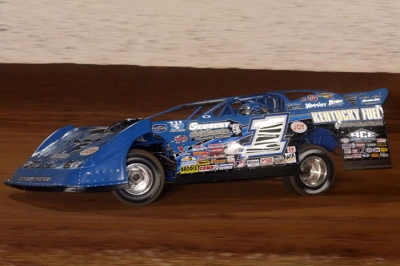 Josh Richards will start from the pole of Friday's first heat race. (pbase.com/cyberslash)

A star-studded field of 66 Dirt Late Models signed in for action in the World of Outlaws Late Model Series event, which is part of a blockbuster season-ending tripleheader at The Dirt Track at Charlotte. The rain-plagued program also drew 55 machines for the companion World of Outlaws Sprint Car Series meet and 30 entries for the Super DIRTcar Series Big-Block Modified action. | Complete World Finals coverage

The evening’s original schedule called for two separate rounds of Ohlins Shocks Time Trials for the WoO Late Models – the first to line up Friday night’s heat race and the second to align Saturday night’s preliminaries. But forecast rain struck the four-tenths-mile oval midway through the second round of WoO Sprint Car time trials, forcing officials to end the competition early.

With the second round of Late Model qualifying wiped out, officials announced that round one results would be used to set the weekend’s heat race lineups. Friday’s heats will be lined up from drivers’ first-lap times and Saturday’s prelims will utilize entrants’ lap-two clockings.

Richards, who enters the weekend’s pair of 50-lap, $10,000-to-win events trailing WoO points leader Rick Eckert of York, Pa., by 14 points as he seeks an unprecedented third consecutive tour championship, clicked off a lap of 15.126 seconds during his first trip around the track to secure his third fast-time award of 2011. The 23-year-old star will start Friday night’s first 10-lap heat race from the pole position in his father Mark’s Rocket Chassis house car.

Davenport, who turned 28 on Oct. 31, turned the fastest overall lap of the qualifying session when he stopped the clock at 15.057 seconds on his second lap. His second WoO fast time of the season earned him the pole starting spot in Saturday night’s opening heat race driving the Barry Wright Race Cars house car.

Arguably the hottest dirt Late Model driver in the country after blazing through the month of October with four special-event victories worth a combined $50,000, Davenport will seek a repeat of his performance at last year’s Lowes Foods World Finals. He set fast time in both rounds of qualifying, won both his heat races and scored a victory (his first-ever on the WoO tour) and a runner-up finish in the twin feature events.

Davenport was one of two drivers to secure pole starting spots in heats on both Friday and Saturday, joining Mike Marlar of Winfield, Tenn. Other pole position winners for Friday’s program were Dale McDowell of Chickamauga, Ga., Steve Francis of Ashland, Ky., and Scott Bloomquist of Mooresburg, Tenn., while Shane Clanton of Fayetteville, Ga., Will Vaught of Crane, Mo., John Blankenship of Williamson, W.Va., and Jimmy Owens of Newport, Tenn., will start Saturday heats from the inside of the first row.

Richards managed only the 17th-fastest lap for Saturday’s program, giving him the third starting spot in the fifth heat. Eckert, meanwhile, authored qualifying efforts of 18th and ninth, putting him third in the sixth heat on Friday night and second in the third heat on Saturday evening.

The Lowes Foods World Finals continue on Friday and Saturday, with gates opening at 3 p.m. and hot laps scheduled to begin at 4 p.m. each day. Friday’s program will begin with the held-over second round of WoO Sprint Car Series time trials before shifting to the regularly-scheduled tripleheader action, while Saturday’s card will kick off with Thursday’s four postponed Super DIRTcar Series heat races before the regular competition gets the green flag.

Saturday night’s World Finals program will be televised live by the Speed cable network from 8 p.m. to midnight Eastern time.