O'Neal winner at DTWC as Owens wraps up title 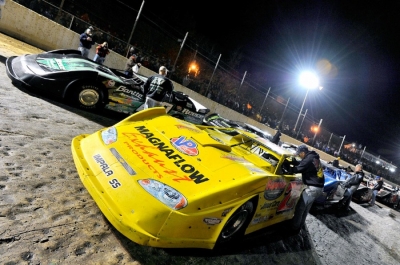 Both celebrated their lucrative success in victory lane — O'Neal's No. 71 led all 100 laps for a $50,000 triumph and his third crown jewel victory of the season, while Owens and his No. 20 locked up the $75,000 season-long series title — and congratulated one another for their success in front of a huge crowd.

"Man, how about it? Congratulations to the 20 car," the 47-year-old O'Neal said after dominating the season finale in a Carl Short-promoted event that was back for the first time since 2008 to the Ohio track that went back to its roots in being renamed Atomic Speedway.

"Congratulations to Donnie for a heckuva a year and heckuva run tonight," added the 39-year-old Owens, who entered the weekend with a 50-point lead on two-time champion Scott Bloomquist and finished 80 points ahead.

A weekend that promised drama in settling the Owens-Bloomquist battle didn't have much during the 100-lap finale as a track worn down by a late-afternoon start — forced by Friday's rainout of Late Model preliminaries — allowed little passing.

For the most part, the front-row starters O'Neal and Owens spent the 100 laps making sure to avoid trouble with lapped traffic and maintaining a pace that wouldn't put undue wear on their tires.

They ran in single-file all the way with Owens never making the slightest attempt to gain the lead in knowing that his runner-up finish assured him of the title.

"Tonight was just tire management. We was a little softer than the second- and third-place cars, but we just sort of tried biding our time there and kept it at straight as we could," O'Neal said. "It's pretty easy when you've got a good race car.

"I was confident that I'd taken care of my tires. They kept digging, I wasn't really loose. I really knew I was going to make it to the end there. The only thing I was worried about was the tires those other guys had on being faster than what I had on, and with the racetrack being one-laned, it was going to be hard for them to get around me."

Owens, whose fast time among 90 race cars gave him 10 bonus points and a 60-point lead by feature time, was focused on the task at hand at the 3/8-mile oval where all 28 starters hugged the inside groove.

"We just had to finish tonight," said Owens, who restarted alongside the third-running Bloomquist a few times during double-file restarts early in the main event. "I knew we were taking off in the rubber (strip on the track surface), and it was going to be hard for (Bloomquist) to get around us — but we weren't worried about that. We (chose tires) a little conservative to make sure we were going to be there at the end, and we made it, and brought it home."

Owens credited O'Neal with maintaining a pace that kept the frontrunners from dealing with lapped traffic most of the way, and a dozen cautions gave the leaders clear racetrack for much of the distance.

"Donnie, I knew he wasn't going to get out of the rubber," Owens said. "He was setting a great pace. He'd get out front and then he'd slow down and make sure we didn't catch lapped traffic, and I was kind of glad he did that, because I didn't want to get in lapped traffic ... that would've give someone else time to catch us."

Third-starting Josh Richards of Shinnston, W.Va., slipped back to fifth early in the race, but he was the only driver to make significant passes among the top 10 in the entire race, taking fourth from John Blankenship of Williamson, W.Va., on the 37th lap, then drawing the night's biggest cheer when he dropped Bloomquist to fourth one lap before the halfway point.

Richards took a few peaks at Owens on the backstretch on laps 58 and 59, but he was wary of making contact with Owens and backed off both times entering turn three. Richards wasn't as good on short runs between frequent cautions in the race's late stages and ended up settling for third, but the two-time World of Outlaws Late Model Series champion took pains to not get into the middle of the Owens-Bloomquist points chase in the wrong way.

"I know what it's like being in that position, and there were a couple of times I could've got in there and nudged (Owens), but I didn't want to be that guy," Richards said. "I have a lot of respect for him and Scott, and I didn't want to be coming between them."

Notes: O'Neal's MasterSbilt Race Cars house car is powered by a Jay Dickens Racing Engine and sponsored by Magnaflow Exhaust, Superior Cleaning Services and Independence Lumber. ... O'Neal thanked his crew and supporters in victory lane after his third crown jewel of the season, and third of his career. Previously this season he captured the $100,000-to-win Dream at Ohio's Eldora Speedway and just two weeks ago collected $40,000 at the Lucas Oil Late Model Knoxville Nationals at Knoxville (Iowa) Raceway. ... O'Neal finished third in series points, nearly 700 points behind Owens. ... Owens drives a Bloomquist Race Car powered by a Cornett Racing Engine and sponsored by Reece Monument, Gantte Appraisals and Red Line Oil, also thanking his crew and supporters for their help in reaching the title. ... Fourth-finishing Scott Bloomquist finished the season with a series-record 15 victories; Owens had eight and O'Neal five as the three drivers combined for 70 percent of series victories. ... The 100-lap feature was slowed by 11 cautions, all for single-car issues of flat tires or slowing cars. .. Steve Shaver lost a driveshaft on the sixth lap and was the first car out; no other yellow flag required a cleanup. ... The series used two double-file restarts but switched to single-file the rest of the way, citing the one-laned track conditions. ... The biggest scare for the leaders came on a lap-60 restart when Jared Landers drove through an official's "stop" sign in the infield pits, going back onto the track just in front of the onrushing field in turn one. O'Neal checked up a bit to assure there wouldn't be an issue, then used Landers as a pacesetter until the next caution on lap 84 for Dustin Linville's flat. ... Tim Dohm of Cross Lanes, W.Va., led all 30 laps of the Jim Dunn Memorial for non-qualifiers. He turned down an offer to start on the tail of the feature field, instead opting for the $3,000 winner's purse. ... With Friday's preliminaries washed out, the two-day event was compressed into a single day with action starting about 4 p.m. Saturday.