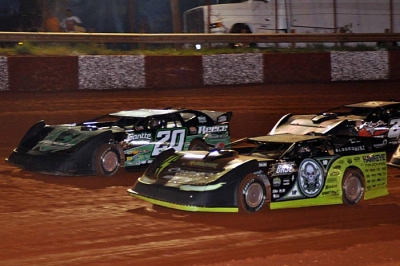 ROME, Ga. (Oct. 9) — With the race and the championship slowly slipping away from him, Jimmy Owens found new life on the Lucas Oil Late Model Dirt Series right when he needed it the most Sunday at Rome Speedway.

Owens, the Newport, Tenn., driver who trailed two-time defending series champion Scott Bloomquist of Mooresburg, Tenn., by 65 points entering the night, saw his odds of claiming his first series championship go from next to nothing to much more likely in an instant when Bloomquist blew an engine while leading with 14 laps remaining. | Slideshow | Video | Notebook

The second-running Owens inherited the lead after Bloomquist’s demise and capitalized to earn $10,000 for his eighth victory of the season on the tour. He reclaimed the series point lead as the tour heads into its season finale next weekend at the $50,000-to-win U.S. Steel Dirt Track World Championship presented by Sunoco at K-C Raceway in Chillicothe, Ohio.

“That’s why it’s not over till it’s over,” Owens, said of his improbable climb back atop the standings. “You don’t wanna see no body tear up. It’s a expensive sport and we do this for a living. When a guy loses a motor or something like that, it’s just tough luck. You hate to win ‘em that way, but we’ll take it any way we can get it.”

Owens, who charged from sixth to second prior to Bloomquist’s engine woes, cruised to the finish in race’s closing laps, scoring the victory ahead of a three-way battle that saw Dale McDowell of nearby Chickamauga, Ga., hold off a hard-charging Clint Smith of Senoia, Ga., and Don O’Neal of Martinsville, Ind., by just a few car lengths at the finish line.

The triumph gives Owens a 50-point advantage over Bloomquist, who ended up 22nd in the final rundown. While he’s happy for the reversal of fortune, Owens doesn’t plan to change his approach one bit heading into next weekend’s finale.

“It doesn’t change nothing,” said Owens, who’s gunning for his first Lucas Oil Series championship after finishing second to Bloomquist in each of the past two years. “We set out to win this race tonight and next week we’re gonna go up there with plans on doing our best to win that show up there.”

Bloomquist, who extended his points lead with a victory Saturday night at nearby Dixie Speedway, was in position to further increase his points lead with what would have been his 16th victory of the season on the tour. But after dominating the first 30 laps, his race and his upper hand in the championship battle went up in smoke when his engine let go on lap 36.

The disappointing outcome marks the fourth time this season Bloomquist has failed to finish a series race, while Owens, on the other hand, was running at the end of all but one race. Bloomquist’s up-and-down performance this year, combined with Owens consistency has produced the tightest points battle in series history with the two drivers swapping the points lead six times.

Even with his latest setback, Bloomquist hopes to add another point lead change to the back-and-forth battle with a strong run next week in Ohio.

“Championships are won and lost on things like this. We’ve had a lot of opposition this year, and he’s not had any,” Bloomquist said. “We’re gonna do everything we can to still try and win it and just let the cards fall as they may.”

While Owens pulled away to the victory in the closing laps, the trio of McDowell, Smith and O’Neal dueled back and forth for the runner-up position with McDowell holding off Smith’s charge to earn his fourth runner-up finish in the past two months on the tour.

“I feel like we probably had a third-place car,” said McDowell, who started third and ran among the top five for the entire race. “I know Clint was a little better. I was able to get a run on that last restart, but I think I was holding him up. He was better rolling that outside, so we got a lucky break there.”

Smith agreed that he had a better car than McDowell, and felt he had a chance to chase down Owens if it hadn’t been for what he considered discourteous driving by McDowell.

“I kinda got drove around the racetrack the last 10 laps pretty bad,” Smith, a regular on the World of Outlaws Late Model Series, said of his battle with McDowell. “I had the fastest car at the end by far. I think if we would’ve just got some kinda break on the racetrack and didn’t get drove wrong, we could have been good.”

The 11th-starting O’Neal settled for fourth after making a late charge from outside the top five. Pearson advanced from the 15th starting position to finish fifth, earning his first top five in the past seven series races.

Shane Clanton of Fayetteville, Ga., was sixth at the finish with Steve Francis of Ashland, Ky., seventh. Chris Madden of Gray Court, S.C., charged from 20th to eighth after transferring to the feature through a consolation race. Super Late Model rookie Chip Brindle of Chatsworth, Ga., was ninth for his best finish in five Lucas Oil Series events this year. Tyler Reddick of Corning, Calif., started from the pole, but was never a factor in finishing 10th.

Notes: Owens drives a Mike Reece-owned Bloomquist Race Car with a Cornett powerplant and sponsorship from Reece Monument, Gantte Appraisals and Red Line Oil. ... The race was slowed by three cautions, one for Eric Wells of Hazard, Ky., at lap 25 and one for Bloomquist on lap 36. The final caution was for Brad Neat of Dunnville, Ky., on lap 39. ... Bloomquist earned 10 bonus points for posting the fast lap during time trials. ... Madden earned the race’s hard charger award with his 20th-to-eighth run. ... Seven home-state drivers made the feature race with four finishing in the top 10. ... Next weekend’s Dirt Track World Championship will mark the first time the race has been under the Lucas Oil Series banner; it was part of the Lucas Oil tour's precursor NARA events in 2004.