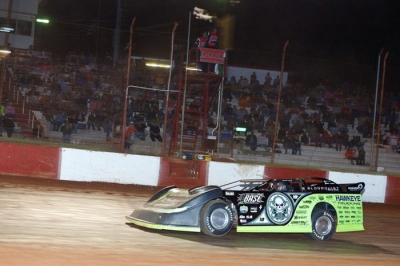 Scott Bloomquist takes the checkers at the Dixie Shootout. (praterphoto.com)

WOODSTOCK, Ga. (Oct. 8) – Some drivers like to play it safe when leading a championship battle late in the season. Not Scott Bloomquist.

With a 15-point lead in the Lucas Oil Late Model Dirt Series standings heading into Saturday night’s Lucas Oil Dixie Shootout at Dixie Speedway, Bloomquist of Mooresburg, Tenn., was anything but conservative at the 3/8-mile racetrack north of Atlanta. | Video | Notebook | Slideshow

The two-time defending series champion pushed the issue all night in the $10,000-to-win event. He didn’t give an inch during a side-by-side battle with fellow front-row starter Don O’Neal on the race’s opening lap and again didn’t back down as he and Steve Casebolt sliced through heavy traffic while battling for the lead during the race’s middle stages. And he sure didn’t let up in the race’s final 12-lap run to the finish as he pulled to more than a straightaway advantage en route to his 15th Lucas Oil Series victory of the season.

The triumph marked Bloomquist’s sixth trip to victory lane in the late-season special event and stretched his lead in the series standings to 65-points over Jimmy Owens of Newport, Tenn., who finished fourth. Ray Cook of Brasstown, N.C., was second at the finish line with home-state driver Shane Clanton of Fayetteville, third. Tyler Reddick of Corning, Calif., finished behind Owens in the fifth position.

"We came out here to win and that’s we did,” said Bloomquist, who will lead the tour into its final two races beginning Sunday night at Rome (Ga.) Speedway and concluding with next weekend’s Dirt Track World Championship at K-C Raceway in Chillicothe, Ohio.

“It was a good points night for us; we set fast time in our group and led every lap here tonight in the heat and feature,” he added. “There are still two more races to go so it's not over yet. I know Jimmy will fight all the way to end next week at K-C."

While Bloomquist held the lead for the entirety of the 50-lap race, four drivers took turns in second with three of the four falling out while holding the position. O’Neal was the first to go down. His race came to an early end when left-front suspension issues sent him into the turn-one wall on lap three.

O’Neal’s misfortune moved Cook to second. He held the spot until Casebolt overtook him on lap 28 and set his sights on Bloomquist. Casebolt moved to challenge Bloomquist two laps later as heavy traffic blocked the leader’s path.

With Cook close enough make it a three-car battle for the lead, Casebolt made his most serious challenge for the lead on lap 34. He used the low side of the racetrack to pull alongside Bloomquist exiting turn four, but Bloomquist pulled back ahead and held a slight advantage over Casebolt and Cook until a lap-37 caution.

Casebolt’s bid to score his first Lucas Oil Series victory in more than four years came to an end under the caution when issues under the rear end of his race car sent him to the pit area. Cook again briefly held second after Casebolt’s demise, but Chris Madden of Gray Court, S.C., took the position away on lap 39.

Madden, who slid back a few spots from his sixth-starting position early before charging toward the front late, suffered mechanical woes of his own just two laps shy of the finish, giving the spot back to Cook, who survived the final laps to earn his first top-five finish on the tour since mid-August.

“This is the best finish we’ve had in the past three or four months with the Lucas Series. I’m just glad for a podium finish finally,” said Cook, who’s winless on the tour in 2011. “I thought we had a better car than Scott there for a little while, then Casebolt came up there and showed me that he had one too. I don’t know what happened to him, then something happen to Madden there at the end. I guess it was just meant for us to run second tonight.”

Clanton, a former Dixie Speedway track champion who now follows the World of Outlaws Late Model Series full time, started eighth and steadily worked his way forward throughout the race. He was fourth for the lap-37 restart, when contact with third-running Mike Marlar of Winfield, Tenn., sent Marlar to the pit area with a flat left-rear tire. Clanton survived the contact and held off Owens in the closing laps.

Owens struggled to move forward during the first half of the race, but positions gained by virtue of the trouble of those in front of him, coupled with an improving race car late in the race, propelled him to a top-five finish. He remains within striking distance of Bloomquist in the series standings as he looks for his first series title.

“It’s not exactly what we wanted out of tonight. But we dug ourselves a hole early, so I feel good to come out of here where we’re at,” Owens said. “Anything can happen in this deal. We’ll just go on and do our best at Rome and K-C.”

Aaron Ridley of nearby Chatsworth, Ga., was sixth at the finish after starting fourth and running among the top five for much of the race. Brad Neat of Dunnville, Ky., advanced from 15th to seventh with Jonathan Davenport of Blairsville, Ga., eighth. Steve Francis of Ashland, Ky., and Clint Smith of Senoia, Ga., rounded out the top 10 finishers.

Notes: Bloomquist's self-designed car is powered by a Roush Yates Engine and sponsored by Miller Bros. Construction, Hawkeye Trucking, Sweet Mfg., Base Racing Fuels and Ohlins. ... The lap-37 laps caution appeared when 2011 Dixie Speedway track champion, Michael Page of Douglasville, Ga., slowed on the frontstretch. ... Bloomquist earned 10 bonus points for being the fastest qualifier in the first of two qualifying groups. ... Brad Neat of Dunnville, Ky., earned the race’s hard charger award for his run from 15th to seventh. ... The race was held in front of a near-record crowd at the Atlanta-area track. ... The tour heads to Rome Speedway for another $10,000-to-win event Sunday evening.