Birkhofer earns $7,000 for victory at Knoxville 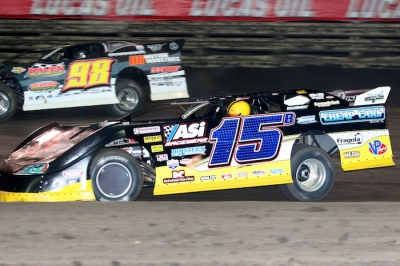 The 39-year-old Muscatine driver survived a scrape with lapped traffic and stayed just ahead of challenges from a pair of third-row starters for a $7,000 Lucas Oil Late Model Dirt Series victory. | Complete Knoxville coverage

"Going through lapped traffic it got pretty hairy," said Birkhofer, who beat Darrell Lanigan of Union, Ky., and Will Vaught of Crane, Mo., to the checkered flag. "I knew these guys were on my you-know-what, so I was trying to get through there."

Birkhofer, cheered wildly when he made a high-side move to take the lead in his heat race, was still being celebrated by home-state fans at his trailer more than an hour after the race.

Birkhofer, who won the inaugural Knoxville Nationals in 2004, is scheduled to start on the pole of Saturday's $40,000-to-win main event by virtue of his preliminary performance at the historic half-mile oval.

Lanigan and Vaught, who swapped the second spot several times while trying to chase down Birkhofer, finished second and third while fast qualifier and eighth-starting Scott Bloomquist of Mooresburg, Tenn., was fourth. Jason Rauen of Farley, Iowa, who started outside the front row and led the first two laps before losing the lead to Birkhofer, rounded out the top five.

Once the third-starting Birkhofer took the lead from Rauen, he pulled ahead comfortably and was firmly in command at the halfway point while Vaught and Lanigan swapped the second spot. As Birkhofer worked through lapped traffic, Vaught and Lanigan drew within a dozen lengths, but Birkhofer — surviving a backstretch collision with the lapped car of Nick Marolf — got rolling again and pulled away to win by a half-straightaway.

"I don't know what (Vaught and Birkhofer) were doing, but I was trying to dice through there. I was trying to get seven-grand. That's what it was about for me," Birkhofer said. "I figured if I got up there and made the wrong choice entering (the corner) one time, they were going to be beside me and they were going to win. So I was just fortunate to keep ahead of 'em just enough I guess."

Lanigan, subbing in the Rocket Chassis house car for Josh Richards, matched Thursday's second-place finish to set him up as one of the favorites for Saturday's lucrative event.

"We ran second both nights here, so hopefully tomorrow night we can come out in front," Lanigan said. "I mean, I'm sure every one of these guys are trying the same thing, but we've got a good car right now."

Vaught, who finished fourth in last year's finale at Knoxville and was coming off a pair of victories last weekend at a half-mile oval in Muskogee, Okla., thought he had an opportunity to win amid the Birkhofer-Marolf contact.

"I thought they were going to wreck down the back straightaway when that lapped car hit Brian, but it all worked out for him," Vaught said. "He had the best car I think."

The race's lone caution appeared on the second lap when Jared Landers got into the turn-three wall, breaking his rear spoiler; he retired.

Notes: Birkhofer's MB Customs chassis has a Pro Power engine and sponsorship from J&J Steel, Zens Flooring, Baileigh Industrial, ASI and Port City Racing. ... Birkhofer got his sixth victory of the season, all but two of them in Iowa. ... Dale McDowell of Chickamauga, Ga., left Knoxville on Friday afternoon after getting a call that his mother was in failing health; he got word not long after leaving the track that Renva Dover died. ... Saturday's action at Knoxville includes a C-main, B-main and the 100-lap feature. Modifieds will also be in action.