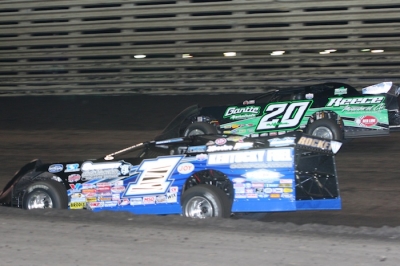 KNOXVILLE, Ill. (Sept. 29) — Three years ago at Knoxville Raceway, Jimmy Owens was in control of a preliminary feature at the Lucas Oil Late Model Knoxville Nationals when Darrell Lanigan slipped by for a victory. So when Owens went around Lanigan to take command of Thursday's opener at the historic half-mile oval, he wanted to make sure he won this race to the checkered flag. | Complete Knoxville coverage

"I kept looking for him over my shoulder there," Owens said.

But any chance Owens got to look behind him in the closing laps, he saw nothing but racetrack as the 39-year-old from Newport, Tenn., stretched his winning margin the 25-lapper to more than a straightaway after taking command for good on the 12th lap.

"I'll tell you what, we've been here the last two or three years and ran good, came up close a time or two," said the third-starting Owens, who pocketed $7,000. "To bring it home and get a win before this weekend's main event is pretty good. Maybe we can keep it going the rest of the weekend."

Weekend action continues Friday with another complete preliminary night program that, along with Thursday's action, sets the lineup for Saturday's $40,000-to-win main event that carries one of the best purses in Dirt Late Model racing.

Starting outside the front row, Lanigan got the jump on polesitter Chad Simpson of Mount Vernon, Iowa, and hugged the inside groove while leading Owens in the early laps. Owens went to the high side and the pair battled a half-dozen laps with Owens edging ahead to lead the ninth lap. Lanigan crept back out front for two more circuits before Owens went around him for good — then moved down into the lower line most of the field was running.

Lanigan hoped his groove would win out at the sprint-car stronghold.

"That bottom was so fast I never dreamed he could make it stick there in the middle. But he did, and he got it done. He had the best car tonight," Lanigan said. "I knew if he stayed out there and I could hit that bottom right, it was going to be tough. But he got back to the bottom."

Owens had a half-straightaway lead with 10 laps remaining and when Lanigan slipped up briefly in turn four, Owens pulled further ahead while Hubbard had to check up to avoid a collision.

"Jimmy seemed to be in his own ZIP Code, really," Hubbard said. "I don't know if I ever could've got to him."

Two cautions slowed the action. The first appeared on the seventh lap when third-running Steve Francis slowed on the frontstretch after his car's battery shorted out. Jason Rauen spun back in the pack for a lap-13 yellow.

Although Hubbard and Birkhofer finished third and fourth in Thursday's semifeature, they're tied as the top points-earners in Knoxville's unique system — made up of points accrued from time trials, heat races and the semifeature — that sets Saturday's lineup. Hubbard and Birkhofer have 492 points apiece followed by Friday's fast qualifier Scott Bloomquist (484), Owens (477), Babb (474) and Lanigan (474).

Those drivers can better those points totals in Friday's preliminary program. Saturday's starting position is based on the better points night, not a combination of both preliminary nights.

Notes: Owens drives a Mike Reece-owned Bloomquist Race Car with a Cornett powerplant and sponsorship from Reece Monument, Gantte Appraisals and Red Line Oil. ... Runner-up Darrell Lanigan was driving a brand new Rocket Chassis house car that carried a black-and-blue graphics scheme. Lanigan was subbing for Josh Richards, who is spending the weekend behind the wheel of a Kyle Busch-owned truck on the NASCAR Camping World Truck Series at Kentucky Speedway. ... Billy Moyer of Batesville, Ark., who scored an unprecedented three-victory sweep last year at Knoxville, started 16th and finished seventh in seeing his streak snapped.