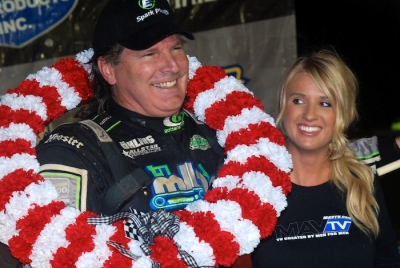 BROWNSTOWN, Ind. (Sept. 24) — While enjoying victory lane Saturday at the 32nd annual Jackson 100, Scott Bloomquist joked with the trophy girl about the vocal mixture of cheers, boos and catcalls from an agitated Brownstown Speedway crowd.

The 47-year-old Hall of Fame driver from Mooresburg, Tenn., was in a charitable mood after becoming the first four-time winner of Brownstown's biggest event, pocketing $20,000 for his fourth straight Lucas Oil Late Model Dirt Series and record-setting 14th of the season. | Notebook | Slideshow | Video | | Qualifying

Bloomquist, whose right-rear tire went flat in victory lane, also fought off late-race challenges from rival Jimmy Owens of Newport, Tenn., extending his lead over Owens in the back-and-forth title chase to 40 points.

The fast-qualifying Owens, who missed an opportunity to take advantage of a lap-93 bobble by the winner, then pulled alongside Bloomquist briefly on lap 98, settled for second at the quarter-mile oval on a night when rain showers delayed action two hours and provided a high-speed and tricky racing surface.

Former track champion Don O'Neal of Martinsville, Ind., who struggled in prelims at his home track, rallied from 19th in the 100-lapper to run as high as second, but settled for third. Jared Landers of Batesville, Ark., advanced nine positions to finish fourth and Scott James of Lawrenceburg, Ind., rounded out the top five.

A few top contenders fell by the wayside. Brad Neat of Dunnville, Ky., started outside the front row and controlled the first third of the race, but he spun by himself between turns three and four on a lap-34 restart. Brian Birkhofer of Muscatine, Iowa, started 11th and was up to fourth when a flat left-rear tire forced him pitside just before Neat's demise.

Bloomquist rarely led by more than a half-straightaway, but he stayed ahead of a tight Owens-O'Neal battle from laps 55-72 as they swapped the second spot several times. But over the last 25 laps it was Owens giving chase as O'Neal faded, and Bloomquist's comfortable lead evaporated with seven laps remaining when he hit a tricky hole in the low groove between turns three and four and jumped on the brakes.

"I knew I could've given it away. That's why I stopped. I knew if I stayed in the gas the car was going to push out," Bloomquist said. "I hadn't been that low in quite a while. I looked back and I saw Jimmy was down low, and I thought I'd give it a shot down there, and I just hit that rut down there and it made my front end turn to the outside. I knew if I didn't brake-check I was going to leave (Owens) the whole racetrack, or the whole bottom anyway. We checked up and got our composure back and just started bearing back down."

Owens was disappointed he didn't take advantage of the golden opportunity.

"He dropped to the bottom there in (turns) three and four, and I knew he was going to hit that hole and mess up. For some reason I knew it was going to happen and I didn't prepare myself for it — I just kind of cost myself the race right there," the runner-up said. "I was in position. I just didn't make it happen. I let myself mess up and that's about it."

Owens got a final shot at Bloomquist five laps later with the frontrunners running behind a pair of lapped cars, briefly slipping underneath the leader exiting turn two. But Bloomquist repelled the charge and held on to add another Jackson 100 trophies to others he's won in '90, '91 and last season.

"I thought we were a little bit better than he was on the bottom, but it was just real hard to get through that hole," Owens said. "We'd hit that hole about one out of every three laps and we'd lose a little bit of ground. We were able to reel him in there at the end and put on a good show for everybody."

O'Neal steered his yellow No. 71 into contention, but he said he didn't have anything for Bloomquist.

"We got into third there. I thought maybe we had a shot at second. Those guys were just a little better than we were at the end," O'Neal said. "I was hoping that top would come in where you could run all the way around, but it never did. But it turned out to be a good race for all the rain we had."

The feature was slowed eight times, the most serious on the 57th lap when Josh McGuire barrel-rolled a half-dozen times over the turn-one banking. The Grayson, Ky., driver's No. 41 ended up on its wheels and he climbed from the car unhurt.

Notes: Bloomquist's self-designed car is powered by a Roush Yates Engine and sponsored by Miller Bros. Construction, Hawkeye Trucking, Sweet Mfg., Base Racing Fuels and Ohlins. ... The event was sponsored by Bryan Bowman Dodge-Jeep. ... Polesitter John Blankenship of Williamson, W.Va., was never a factor, finishing ninth. ... Steve Francis of Ashland, Ky., started third but slipped out of the top five and got banged around as drivers checked up to avoid Brian Birkhofer, who slowed on the 34th lap with a flat. ... Other cautions appeared on lap five (a slowing Kent Robinson), lap six (Tyler Reddick and Ray Cook tangled in turn three), lap 60 (Steve Casebolt slowed) and lap 67 (Earl Pearson Jr. slowed). ... Lucas Oil heads to La Salle (Ill.) Speedway on Tuesday before a tripleheader weekend at Knoxville (Iowa) Raceway for the Lucas Oil Late Model Nationals, capped by a $40,000-to-win feature on Oct. 1.