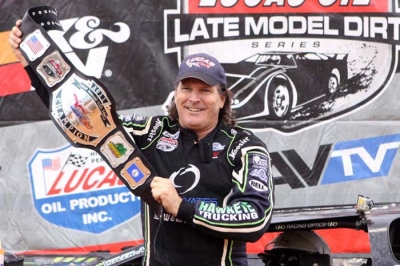 Francis took the lead on the start and had two stints out front before Bloomquist took over for good while the two battled through slower traffic on lap 24. Francis held on to the second position as Bloomquist began to pull away before rain started to fall over the half-mile racetrack.

"It sounds good to win both of these races; we had never won at either of these tracks,” Bloomquist said. “We knew we would get one eventually, the car was good all day, it was a little hard to pass in the heat race. The tire set up we chose worked great for getting to the bottom and get something done down there.”

Francis, who has had an up-and-down season on the Lucas Oil tour, was happy with his runner-up finish, but wished he could have held on for just a few more laps.

"We had a real good car today, we went with the smaller motor thinking the track would slick up some and it did,” Francis said. “I tried to hold my line there. If we just could have kept the lead for about five more laps we would've won, but once Scott got by me, I knew I was in trouble."

Marlar was also pleased with his strong run in his new ride with the Georgia-based Bryson Motorsports, but he would’ve preferred to have ran the race’s final 19 laps.

"To finish third to these guys, it is quite an accomplishment,” Marlar said. “We'll take third and go to the next race, I was just waiting for the final 20 laps, and I felt like we had a car that could've won."

Notes: Bloomquist's self-designed race car is powered by a Roush Yates engine with sponsorship from Base Racing Fuels, Ohlins, Miller Bros. Construction and Sweet Mfg. ... The race was originally scheduled for Saturday night, but was pushed back to Sunday due to rain. ... The event used a unique preliminary format, with two 25-lap qualifying races used instead of heat races. ... The victory gives Bloomquist a series-leading 39 victories for his career. ... The Lucas Oil Series heads to Brownstown (Ind.) Speedway Sept. 23-24 with $20,000 up for grabs in the 32nd annual Jackson 100.