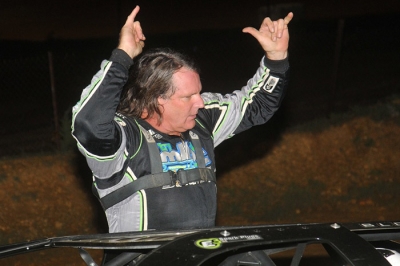 Scott Bloomquist emerges from his car to a mixture of boos and cheers. (Travis Trussell)

The victory also allowed Bloomquist to close to within 10 points of Owens in the tour’s standings after contact between the two drivers forced Owens to fall out of the race, dropping him to a 16th-place finish.

Bloomquist started fourth and overtook McDowell on lap eight with the third-starting Owens following close behind into the second position. The two drivers battled for lead for a number of laps, until Owens attempted to use a turn-one slide job to move by Bloomquist on lap 40.

Owens fell short of clearing Bloomquist on the attempt, and the two drivers made contact as Owens pulled ahead in turn two. Bloomquist attempted his own slide job on the other end of the racetrack, sliding up directly in front of Owens in the middle of turns three and four.

Owens got into the back of Bloomquist, causing heavy front-end damage that quickly cut down his left front-tire. Owens attempted to make the final 10 laps with the flat tire, but began to fade and eventually pulled to the pit area as Bloomquist drove away to the victory.

“You look at the left side of my car where he drove through the side of it, it’s all marked up,” Bloomquist said of the battle with Owens. “I cleared him, he hit me in the (backend), and that’s the way it went. When he drove by me, he didn’t do it with any respect at all, so I don’t need to have any back.”

Owens ended up dropping to 16th in the final rundown, and wasn’t happy with the outcome.

“We went into (turns) one and two there and he started coming down a little bit,” said Owens, who drives a Bloomquist Team Zero Race Car built in Bloomquist’s shop. “I give him a little bit of what he gives everybody else. I don’t reckon he likes to be treated like he does everyone. It was a pretty rotten thing, but it’s part of it. The points are tight and I guess that’s the way of getting caught up.”

McDowell capitalized on Owens misfortune to earn the second spot, finishing in the top five for just the third time this season on the Lucas Oil Series.

“We probably had a third-place car without Jimmy and Scott getting together,” said McDowell, whose previous two top fives were both runner-up finishes in August. “I thought I was gonna win there when those guys got to racing hard, we just didn’t have the traction. We’re gaining; we’re in and around the top five now. If we can keep get this momentum going we can get up there and race with those guys.”

Notes: Bloomquist's self-designed race car is powered by a Roush Yates engine with sponsorship from Base Racing Fuels, Ohlins, Miller Bros. Construction and Sweet Mfg. ... The victory is Bloomquist’s 12th of the season on the Lucas Oil tour and the 38th of his career, which leads the series all-time win list. ... Prior to Friday night, Owens had finished outside of the top five in just three Lucas Oil races; those were all sixth-place finishes. ... Hartman drove Ernie Davis’s no. 25 Rocket Chassis, a ride he’s driving on a part-time basis in 2011. ... DeHaven posted a new track record in time trials. ... Covert had won the previous two Late Model special events at Winchester. ... The tour moves to Virginia Motor Speedway in Jamaica, Va., on Sunday for the $15,000-to-win USA 100; Saturday rain postponed the original schedule.