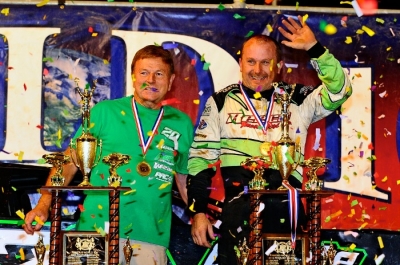 ROSSBURG, Ohio (Sept. 10) — Jimmy Owens was in a league of his own for most of Saturday night’s 41st annual World 100 at Eldora Speedway.

The final 10 laps, however, were a dogfight for the 39-year-old from Newport, Tenn., who had to turn back challenges from Darrell Lanigan, Don O’Neal and Eddie Carrier Jr. to secure his second career victory in the prestigious UMP DIRTcar-sanctioned event. | Complete World 100 coverage

With his once flawless Team Zero by Bloomquist car slowed by damage it sustained in a late-race bout with the half-mile oval’s cushion, Owens used every bit of his ample ability to remain in front during a frenetic run to the finish that had the massive crowd roaring. He earned a $44,000 first-place check after beating Salt Rock, W.Va.’s Carrier to the checkered flag by 0.635 of a second.

“To win (the World 100) once was an achievement,” said Owens, whose previous triumph came in 2007. “To do it again is unbelievable. You know, if we never win another race in our life, we’re proud of where we’re at right now.”

A four-time UMP DIRTcar Modified national champion who has been racing dirt Late Models fulltime for less than decade, Owens appeared headed to a runaway victory after he advanced from the fourth starting spot to pass polesitter Chris Madden of Gray Court, S.C., for the lead on lap 13. He effortlessly glided away from the field following six restarts between laps 39 and 67, building straightaway advantages in short order.

But something changed after the race’s seventh and final caution flag, on lap 82 for a turn-four incident that eliminated the third- and fourth-place drivers, Dale McDowell of Chickamauga, Ga., and a charging Josh Richards of Shinnston, W.Va. With the 10-to-go mark approaching, Lanigan, who had passed McDowell for second on lap 76, began edging noticeably closer to Owens’s Mike Reese-owned car.

“I guess when I jumped the cushion (in turn one) it knocked the bracing loose from my (right-side) door and that really slowed us down quite a bit,” said Owens, the current points leader of the Lucas Oil Late Model Dirt Series. “When I would get within about six cars (lengths) of a lapped car, I would start losing it. All the air getting under the car (the door was bent) was just making the car skatey. We couldn’t stick no more, where early in the race it didn’t faze us none.”

By lap 92, Lanigan was close enough to stick the nose of his Rocket Chassis underneath Owens. The World of Outlaws Late Model Series regular was primed to sail by Owens to assume command in one quick burst.

“But when I caught him,” said Lanigan, “he actually caught them lapped cars at the same time and that kept me from doing a slide job. And that let O’Neal catch up too.”

O’Neal, who started eighth but ran inside the top five for the entire distance, slid under Lanigan rounding turns three and four on lap 93. The two drivers spent the ensuing laps swapping second place – and trading paint – to the benefit of Owens.

The deciding moment came on lap 98 when Lanigan dived to the inside of O’Neal through turns one and two and appeared to have plenty of momentum built up to pass Owens. But Lanigan ran up on Owens too fast in turn two and had to check up, causing a scramble with O’Neal that allowed Carrier to scoot into second on the inside and Owens to open enough room to carry him to the finish line.

“I knew we were hurting and a sitting duck,” said Owens. “But we were able to hold on and hold ‘em off.”

Carrier, 40, made a last-ditch bid to steal the lead from Owens rounding turns three and four on the final lap, but the Mountain State standout fell short. He still recorded by far his best finish in three career World 100 starts and pocketed $15,000.

“It got pretty wild there at the end,” said Carrier, who started 12th in Carl Grover’s Rocket car. “I seen Donnie and Lanigan start battling (for second), and then they kind of got together and lost some time over (in turn two), and I said, ‘Here’s my shot to get second.’

“Then Jimmy was kind of stuck behind the lapped cars and I caught him a little bit. I didn’t know if I had anything for him, but going in that last corner I just took a last dive at it to see if I could clear him. But I didn’t have him cleared and I wasn’t gonna drive through him. It’s the World 100, but it’s just not my deal to race like that. I wasn’t gonna run over a guy to get here.”

Owens realized that Carrier got precariously close on the last circuit.

The victory was Owens’s third overall in Eldora’s pair of annual Dirt Late Model majors, joining his 2009 success in the $100,000 Dream. This one tops his list of checkered flags at the high-banked track, however.

“Tonight was a whole lot more sentimental than the first (World 100 win),” said Owens, who ended a string of 10 consecutive first-time World 100 winners. “The first time we won we were still more of a modified racer and when we won the Dream it just didn’t hit home to what we had done.

“Now that we’ve been in Late Models for a while and been competitive, you realize the prestige of these races a whole lot more. This second one is a whole lot better than the first one. When you see what it means to all the other drivers and the fans, then you realize, ‘Hey, this is a pretty big deal. It’s pretty cool.’”

O’Neal, 47, was 0.917 of a second behind Owens at the finish line. While still winless in 11 career World 100 starts, the third-place finish was his fourth top-five.

The 30-year-old Blankenship, who started 14th in a Rocket machine, broke into the top five on lap 84 when 21st-starter Jared Landers of Batesville, Ark., relinquished the spot after slapping the turn-two wall. Blankenship’s previous World 100 finishes were 21st in 2009 and 11th in 2010.

Madden, who led laps 1-12, faded to sixth at the finish. Filling out the remainder of the top 10 spots was three-time World 100 winner Scott Bloomquist of Mooresburg, Tenn., who started 13th and never climbed into serious contention; Jeep VanWormer of Pinconning, Mich., who got as high as sixth from the 10th starting spot; NASCAR Camping World Truck Series regular Austin Dillon of Welcome, N.C., who pitted on lap 62 after flattening a right-rear tire against the turn-one wall; and Mike Marlar of Winfield, Tenn.

Dillon brought out the race’s fifth caution flag when he got into the outside guardrail. Other drivers who triggered cautions included Steve Shaver of Vienna, W.Va., who slowed with right-front damage on lap 33; R.J. Conley of Wheelersburg, Ohio (stopped on lap 39); Jon Henry of Ada, Ohio, who slapped the turn-one wall on lap 48; Scott James of Lawrenceburg, Ind., who slowed on lap 58 while running sixth.

The only multi-car tangle occurred on lap 82 when McDowell and Richards went spinning in turn four. McDowell, who started second and never ran lower than third in NASCAR star Clint Bowyer’s car, was slowed late in the distance by a nosepiece he bent after hitting the cushion but hung on to third until the plastic folded back and locked up his right-front wheel on lap 82. He thus slowed abruptly against the turn-four cushion – unfortunately at the same time Richards was sliding ahead of O’Neal for third place. With a head of steam Richards, who started 19th, was unable to avoid McDowell’s stricken car, sending them both spinning out of the race.

Among the early casualties was Tim McCreadie of Watertown, N.Y., who retired from fifth place on lap 39 shortly after breaking a right-front shock, and defending World 100 champion Billy Moyer of Batesville, Ark., who started fifth but never climbed higher before dropping out on lap 56.

Bloomquist was fastest in Friday’s qualifying session with a lap of 15.009 seconds. It was his fourth career World 100 fast-time honor and first since 2004.Heat winners on Saturday night were McCreadie, Moyer, Owens, Lanigan, McDowell and Madden. The B-Mains were captured by Landers and Bub McCool of Vicksburg, Miss. A total of 112 cars were signed in for the event. Drivers represented 17 states, Canada and Australia.