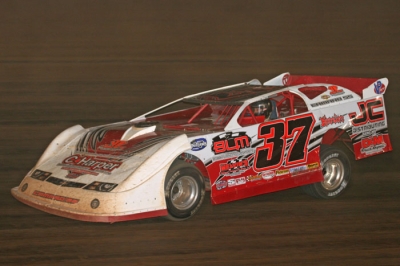 Racing in front of his home-state fans on a track he knows well, the rising young star from Fairmont, W.Va., rolled to the biggest win of his career in the 45-lap Sweet Sixteen finale of the second annual Black Diamond 125 at Tyler County Speedway. | Slideshow

Hawkins, 25, earned a huge $20,000 paycheck for his victory in the unique World of Outlaws Late Model Series event, which pitted the top-eight finishers from a pair of 40-lap semifeatures held earlier in the night. He placed third in the second preliminary (from the 12th starting spot) and then dominated the evening’s headline race after passing Chub Frank of Bear Lake, Pa., for the lead on lap four.

The triumph capped a spectacular weekend at the quarter-mile oval for Hawkins, who also scored an $8,000 triumph in Friday night’s 51-lap UFO Series West Virginia State Championship event. That stood as the richest win of his seven-year Dirt Late Model career — for exactly 24 hours.

“This is unreal,” said Hawkins, who became the 43rd driver to win a WoO event since 2004. “I’m waiting to wake up from this. I’ve dreamed about (winning a major race) my whole life, and to win here in my home state at my favorite track with all these guys here – the 20-grand’s nice, but beating these guys feels so damn good.”

After WoO Rookie of the Year leader Pat Doar of New Richmond, Wis., and veteran Steve Shaver of Vienna, W.Va., bagged $10,000 victories in the semifeatures, Hawkins seized the Sweet Sixteen spotlight. He quickly hustled his Bobby Lake Motorsports Rocket forward from the fourth starting position and was never seriously challenged en route to the checkered flag.

Hawkins did have to deal with a single caution flag — on lap 26 when Davey Johnson of Imperial, Pa., slowed in turn four — but he scarcely missed a beat following the restart. He spent the remainder of the distance maintaining an edge of about one second over Dan Stone of Thompson, Pa., who grabbed second from Mike Marlar of Winfield, Tenn., on lap 28.

“I was just trying to protect,” Hawkins said of his steady run to the finish. “I figured at any minute somebody was gonna be rolling by me, so I just tried to run a smooth line. I got a little excited when I saw the two-to-go (signal) and almost threw (the race) away, but I was able to hold on.”

Hawkins was greeted in victory lane by his overjoyed car owner Bobby Lake, who in 11 years in the Dirt Late Model business had never won a race paying more than $5,000 to win. The West Virginian praised his hired gun.

“I think I got me a gem here,” Lake said of Hawkins, who is in his seventh year behind the wheel of a Dirt Late Model but first driving for Lake. “He’s doing a heck of a job.”

Stone, 34, settled for a $6,000 second-place finish in his family-owned car — four years and one day since his memorable upset WoO victory at Tri-City Speedway in Franklin, Pa. He thought he might have had a shot to battle Hawkins if not for the race’s lone caution flag.

“I think we had a different tire than just about everybody out there and that caution killed us,” said Stone, who started fifth. “Man, that thing was locked to the racetrack before that caution. It was effortless to drive.

“But I’ll tell you what — this is great for these guys,” he continued, gesturing toward the celebrating Hawkins and Lake team. “Hometown guys winning — it couldn’t happen to nicer people.”

Finishing in positions 6-10 was Tim Senic of Elkins, W.Va.; Doar, who started third but wasn’t a factor; Chris Meadows of Crab Orchard, W.Va.; Butch McGill of West Union, W.Va., and Shaver, who pitted on lap 26.

Shaver was flawless in the second semifeature, leading the event from wire-to-wire in the K&L Rumley Rocket car. He survived four caution flags and turned back a late-race bid from Richards to secure the five-figure payday.

Richards, who started sixth, reached second with a lap-22 pass of Stone but couldn’t find a way by Shaver. He crossed the finish line 0.201 of a second behind Shaver.

Hawkins placed third, fading slightly during the second half after appearing primed to glide straight to the front when he needed just 10 laps to move from 12th to fourth. McCreadie was fourth after starting 11th and Stone slipped to fifth at the checkered flag.

The 46-year-old Doar, meanwhile, was the lone driver from outside West Virginia’s borders to crack the winner’s circle during the Black Diamond 125. He pulled off the most dramatic victory of the night, outdueling Davey Johnson and Marlar in a tense three-car shootout that had the big crowd howling.

Doar raced off the pole position to lead laps 1-23 before being overtaken by Johnson. The first-year WoO LMS traveler refused to give in, however, and found new life after a lap-30 caution flag, using the high side of the Bullring to regain command on lap 34.

Moments later Marlar, who started fifth but had fallen to seventh when the caution flag flew on lap 30, found a fast way around the outside of the track. He caught Doar and Johnson on lap 36 and for the next three circuits the trio ran three-wide at times for the lead.

The battle was stalled on the final lap when a caution flag was needed for a multicar tangle in turn three — an incident that occurred directly in front of the on-rushing leaders. Doar had to spin to avoid the crashed machines, but his car sustained only slight rear bodywork damage and he was permitted to restart at the front of the pack because the yellow lights were already on when he slid into the accident scene.

Doar took advantage of the second chance, firing off on the restart to defeat Johnson by 0.145 of a second. Marlar finished a close third, followed by McGill and Darrell Lanigan of Union, Ky.

“We’ve been running all over the country this summer and we’ve run pretty ugly some nights,” said Doar. “Tonight it just went good. I like it here at Tyler County. It’s a pretty big moment for me.”

With 87 cars signed in for the action, Marlar was quickest in Ohlins Shocks Time Trials with a lap of 13.306 seconds. It was his second WoO LMS fast-time honor of 2011 and the third of his career.

The results of time trials were used to split the field for the two qualifying-feature programs: odd-numbered qualifiers to the first program, even-numbered timers to the second set of preliminaries.

WoO completes its Labor Day doubleheader Sunday at Roaring Knob Motorsports Complex in Markleysburg, Pa. A $10,000 top prize will be on the line in the 3/8-mile track’s inaugural Joy Mining Machinery 50.