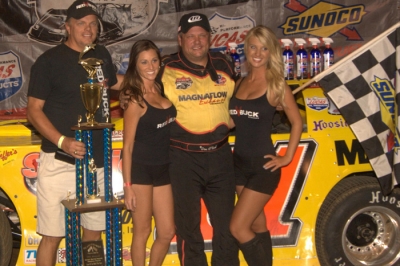 O'Neal, who captured Friday's event at Lawrenceburg (Ind.) Speedway, started on the pole and dominated at Bluegrass Speedway for a $10,000 payday, his third of the season and 17th of his career on the national tour. | Slideshow | Video

"It all started with setting fast time then winning the heat. and that put is in position to start up front and get the lead," said O'Neal, the 47-year-old veteran from Martinsville, Ind. "This car was new (two weeks earlier) at Florence and we sat on the pole and faded. And we sat on the pole at Batesville and blew out a shock before we ever started and wound up hitting the wall. But the guys just kept working hard and tonight everything just came together."

Dale McDowell of Chickamauga, Ga., started alongside O'Neal and settled for a second-place finish at the half-mile oval where passing was difficult in the second half of the event.

"I think the difference was in our tire choice," McDowell said. "Don went with the softer of the two options and I took the harder and he just fired off quicker and that made the difference. I think if we could've gotten the jump on him we could've won, but we keep having solid runs, so we'll take second and go on."

Scott Bloomquist of Mooresburg, Tenn., finished third with Steve Francis of Ashland, Ky., and Brian Birkhofer of Muscatine, Iowa, locking down top-five spots. Series points leader Jimmy Owens of Newport, Tenn., was sixth for the second night in a row — tying his worst series performance of the season — and saw Bloomquist tighten up the championship chase a bit.

O'Neal darted to the lead from the pole at the start of the main event ahead of fellow heat winner McDowell. The fifth-starting Scott Bloomquist quickly moved under Francis and Birkhofer to grab third and put pressure on McDowell. As O'Neal eased to a half-straightaway lead, the lone caution of the race flew on lap 11 when Ray Cook slowed on the back straightaway.

As the field slowed for Cook, fifth-running Mike Jewell clipped the lapped car of Lee DeVasier, sending Jewell into the turn three wall ending his night.

When the field returned to green, O'Neal again eased away from McDowell, who was forced to contend with a low-running Bloomquist. Owens, who started in the sixth row, followed Birkhofer past Brad Neat into sixth.

As the preferred racing groove narrowed, O'Neal took his half-straightaway lead into lapped traffic. With backmarkers Tim Rivers and Eric Jacobsen battling for position, O'Neal was forced to follow the duo, allowing McDowell, Bloomquist and Francis to close on the leader.

"I was really surprised the track got the way it did so quick," O'Neal said of the one-laned conditions. "It didn't really hurt my feelings since I was leading and I knew everybody else was in the same place.

"I got bottled up behind Jacobsen and Rivers and they were racing and then when Jacobsen seen me he waved me on by. Until then I wasn't about to get out of line to try to pass him."

Once O'Neal moved by Jacobsen, he again eased away, beating McDowell to the checkers by car lengths, giving him a repeat victory in the Bluegrass Classic.

Notes: O'Neal's MastersBilt Race Car is powered by a Jay Dickens Racing Engine and sponsored by Magnaflow Exhaust, Jones Core, Second Chance Livestock Dispatch, VP Fuels, Independence Lumber, Janowski Insurance, Superior Cleaning and Hoosier Tires. ... Just two cautions slowed the event, the first for Lee DeVasier's spin on the initial start, then the lap-11 yellow for a slowing Ray Cook. ... Justin Rattliff, Jimmy Owens and Jared Landers each grabbed a piece of the Bluegrass Speedway concrete in preliminary action. Owens got into the wall in time trials, sending him limping to the pits with no time. His crew went to work replacing the right-front suspension and J-bar. ... At start of the first heat, Rattliff grabbed the wall in one and two, sending him pitside before completing a lap. In the second heat, Jared Landers near straightaway lead came to an end when he tackled the turn-three wall. ... Landers and Rattliff started the main event via provisionals while Owens rallied from the tail of his heat to finish third. ... Provisional starter Jeff Watson picked up the PBM/Erson Cams Hard Charger honors with his 26th-to-19th run. ... Among drivers failing to make the main event: Michael Chilton, Kent Robinson, Dustin Linville, Jarryd Holshouser, Jeremy Hines and Chad Stapleton. ... The Lucas Oil Series has a Labor Day weekend doubleheader at Portsmouth (Ohio) Raceway Park with a $10,000-to-win event on Sept. 3 and the $25,000-to-win Hillbilly 100 on Sept. 4, the first time PRP has hosted the Carl Short-promoted event.