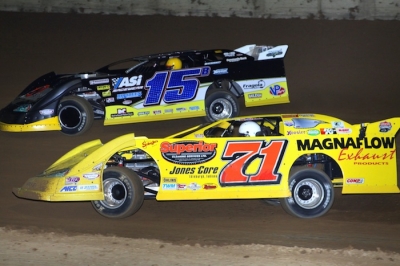 LAWRENCEBURG, Ind. (Aug. 26) — Don O'Neal was briefly going the wrong direction at Lawrenceburg Speedway on Friday night, dropping from his second spot back to third just past the midpoint of the Lucas Oil Late Model Dirt Series main event.

He quickly reversed that trend. Roaring back in the high groove, the 47-year-old driver from Martinsville, Ind., went from third to first over a three-lap stretch at the 3/8-mile oval and pulled away for his second series victory of the season. | Video | Slideshow

O'Neal earned $10,000 in beating Brian Birkhofer of Muscatine, Iowa, to the checkers at one of the country's nicest facilities.

"Birkhofer had a really great race car at the start," said O'Neal, who started fourth and saw Birkhofer lead the first 31 laps. "I drove (the MasterSbilt house car) for all it was worth. The cushion was rugged up there in (turn) two. I was just hanging on there at the end.

"I kept trying that top groove and it finally paid off. We had to battle those lapped cars there at the end, it was really hard racing between the three of us for the lead. I was clean racing and I can't thank Tader Masters enough, Cody Mahoney, and everybody else on the crew. It's nice to win here in Indiana."

Birkhofer, a Lucas Oil Series winner at Lawrenceburg two seasons ago, settled for the second spot.

"O'Neal had the better car," the runner-up said. "Don drove the wheels of it. He passed me clean. That was a great race for the lead. I was hoping to hang in there, but he found that top groove and drove right by me."

Polesitter Scott Bloomquist of Mooresburg, Tenn., was third to inch closer to series points leader and fellow Tennessean Jimmy Owens in the series title chase. Top series rookie Jared Landers of Batesville, Ark., was fourth and 15-year-old Tyler Reddick of Corning, Calif., rounded out the top five. Owens matched his series-worst finish of the season in sixth, the first time he's been out of the top five in a Lucas Oil event since early February.

Starting outside the front row, Birkhofer sprinted to the lead at the start of the 50-lapper in front of the packed grandstand with Bloomquist and O'Neal battling three-wide for the top spot exiting turn four on the first lap. The three-way duel was slowed by a trio early cautions, including a lap-six skirmish among Eric Jacobsen, Jason Jameson and Kent Robinson.

O'Neal scooted past Bloomquist for second by the eighth lap and after 15 circuits, Birkhofer led O'Neal, Shane Clanton of Fayetteville, Ga., Bloomquist and Earl Pearson Jr. of Jacksonville, Fla.

While Pearson dropped from contention with a halfway caution, O'Neal turned up the head on Birkhofer while Bloomquist worked his way forward again, racing back to the second spot and dropping O'Neal briefly to third.

But O'Neal drove around Bloomquist on the high side on a lap-29 restart, set up Birkhofer to make a low-side pass in turn one, then completed the winning move by racing the high side out of turn four for a lead he'd never give up.

O'Neal built a cushion of lapped-car traffic the rest of the way while Birkhofer vainly tried to keep up. Bloomquist edge Landers at the line by a half-length for third.