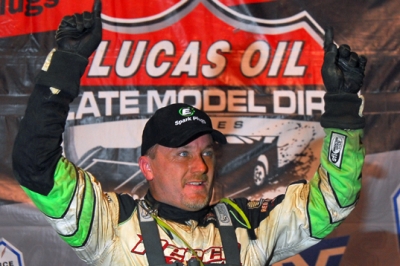 BULLS GAP, Tenn. (Aug. 25) — In Thursday's Reece Monument Scorcher 50 at Volunteer Speedway, Jimmy Owens made sure Reece Monument had a prominent place in victory lane — on the side of his race car.

"It's good to win here in front of the fans," said the 39-year-old Owens of Newport, Tenn., who pocketed $10,000. "My car owner was here, Mike Reece and he sponsored the race, which makes it even more amazing to be able to bring home the win. Dale had a real good car tonight. We slipped up there in turn four on that first lap, but we got it back in line and ran down (Don) O'Neal and then had a really great race with Dale."

McDowell, who led the first 41 laps in looking for his first series victory of the season, settled for the second spot with O'Neal, of Martinsville, Ind., finishing third. Scott Bloomquist of Mooresburg, Tenn., and John Blankenship of Williamson, W.Va., rounded out the top five finishers.

McDowell led at the outset of the 50-lapper while the polesitting Owens slipped to third behind O'Neal. The top three ran that way 14 laps before Owens nabbed the runner-up spot before the race's lone caution on lap 16 for Mark Douglas.

From there on, McDowell and Owens engaged in a tight battle in front of a huge crowd at Volunteer, which hosts its annual late August event in conjunction with NASCAR action up the road at Bristol (Tenn.) Motor Speedway.

Owens stalked McDowell for several laps until driving underneath McDowell at the flagstand to complete lap 41. Owens then took the lead heading into turn, racing through heavy lapped traffic the rest of the way en route to the checkers ahead of McDowell, who raced in front of team owner and NASCAR driver Clint Bowyer.

"We led for a long time and I thought tonight may be the night," McDowell said. "With Clint Bowyer in the house, it would have been nice to get the win, but we'll settle for second and head to the next race."

Owens continued his string of finishing in the top five in all but one series race with his performance at Volunteer, one of the tracks where he first started competing.

"The track was really racy tonight, you could run anywhere on it," Owens said. "The lapped cars are always an issue here, but we just took our time and we were fortunate enough to get by Dale. He's had a tough year and I'm sure he is trying hard to get that first win."