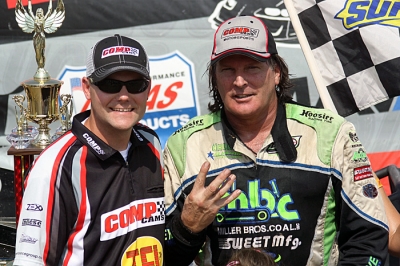 The Hall of Famer from Moorseburg, Tenn., cashed in that debt Sunday afternoon at the 3/8-mile racetrack, dominating the 19th running of the late-summer classic for a redeeming victory worth $40,000 in a race that was postponed from Saturday night when rain set in with 12 laps completed. | Complete Topless 100 coverage

Bloomquist, who started fourth and took the lead from Shannon Babb of Moweaqua, Ill., on lap four Saturday, controlled the entire distance of the Lucas Oil Late Model Dirt Series race on Sunday. Even with an abrasive racing surface bringing the threat of late-race flat tires into play once again, Bloomquist never appeared to be playing it safe as he powered to more than a straightaway advantage at times on his way to recording his fourth Topless 100 victory.

“This means a lot,” Bloomquist said of the triumph, which tied him with fellow Hall of Famer Billy Moyer atop the race’s all-time winner's list. “We’ve been close so many times, and (after last year) it definitely felt like this place owed us one. It helped having 12 laps down, but we learned a little bit last year and I think I could have made all 100 laps (without a flat tire) this year.”

Lucas Oil Series points leader Jimmy Owens of Newport, Tenn., closed in on Bloomquist late in the race in traffic, but never got close enough to make a move as he settled for his second-consecutive runner-up finish in the event. Defending race winner Jared Landers ended up third after running second for the majority of the race while Steve Francis of Ashland, Ky., finished fourth. The event’s fast qualifier, 15-year-old Tyler Reddick of Corning, Calif., finished fifth.

Looking to make it two in a row in the event at his hometown track, Landers, a rookie contender on the Lucas Oil Series who scored an upset victory in the crown jewel event last year, gave Bloomquist his most serious challenge following a mid-race restart. Landers briefly pulled alongside Bloomquist, but was unable to complete the pass as Bloomquist turned up the wick.

“I felt we were better in the long run, but I did happen to (see) his nose out there,” Bloomquist said. “We were being cautious and trying to take care of our tires. After I saw that nose I moved up a little and picked the pace up.”

After turning back Landers, traffic became Bloomquist’s primary adversary as the track surface began to lock down in the low groove. Bloomquist had the most trouble clearing the slower car of Robbie Stuart. After stalking Stuart for a number of laps, Bloomquist finally put the Deridder, La., driver a lap down with a contact-aided pass on lap 89.

Vicksburg, Miss., driver Bub McCool, who ran as high as fourth in the race before suffering a flat tire on lap 74, was the next driver to hold up the leader. Bloomquist rode behind McCool for the final five laps of the race and kept just enough room between himself and the fast-closing Owens.

“We knew we had pulled away, but then you get down to those lap cars and you’re catching ‘em and that lay-over flag don’t seem to mean nothing,” Bloomquist said of his frustrating battle with slower cars late in the race. “The next step is just to spin them out because here comes the second-place guy and he’s pretty excited and here’s their one shot at you. Anything can happen and I’ve had that happen to me here before.”

Owens, the 2009 Topless 100 winner, moved by Landers for the second position when Landers had his own struggle with Stuart on lap 90. But even as he closed the gap on Bloomquist in the closing laps, Owens said he never really thought he had a serious chance of making a winning pass.

“When you get bottled up behind traffic like that, he can’t get around those guys, so I’m probably not gonna be able to get around him,” said Owens, who came into the event riding the momentum of a $50,000 victory the previous week in the Sunoco Race Fuels North-South 100 at Florence Speedway in Union, Ky. “We had a really good car. We probably could have went another 50 laps or so. But second’s good and we’ll take it.”

Landers, who benefitted from his 10th-to-third charge before the rain Saturday night, thought he would have one last shot at Bloomquist when he saw him struggle to lap Stuart, but he knew his chances were over when Owens slipped by him one lap later.

“It looked like we might be able to capitalize when the six car came down on Scott, but then he kinda got me and Jimmy was right there.” Landers said. “We were lucky to get up through there last night cause I couldn’t race those guys like that today. But I came in here thinking a top five would be great, so third, I couldn’t ask for much more.”

Notes: Bloomquist's self-designed chassis is powered by a Roush Yates Ford engine and sponsored by Miller Bros. Construction, Base Racing Fuels, Hoosier Tire, Lane Automotive and Sweet Mfg. ... Bloomquist’s most recent Topless 100 victory prior to Sunday came in 2006. ... The race was slowed by nine cautions. The most serious came Saturday night when a broken axel caused Lucas Oil Series regular Ray Cook of Brasstown, N.C., to flip multiple times in turn one just before the rain began to fall. Cook was uninjured. ... Don O’Neal of Martinsville, Ind., started from the pole of the 25-car field, but was never a factor. He faded fast Saturday night and pulled to the pit area with 10 laps complete. ... O’Neal and Cook were the only two drivers not to return for the remainder of the event Sunday. ... After leading the race’s first three laps, Babb dropped to fourth by lap 12. He faded even faster after the race restarted Sunday before spinning on lap 15. He retired from the race early after losing lap, and was 21st in the final rundown. ... The Lucas Oil Series has a tripleheader weekend on tap Aug. 25-27. The tour will visit Volunteer Speedway in Bulls Gap, Tenn., on Thursday before heading to Lawrenceburg (Ind.) Speedway on Friday and Bluegrass Speedway in Bardstown, Ky., on Saturday.