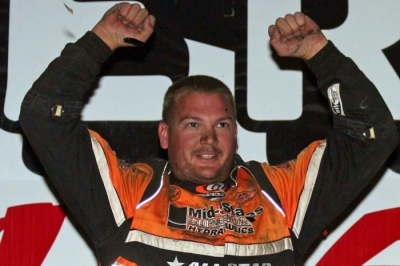 Smith was never seriously challenged en route to his first series triumph since Feb. 13, 2010, at Volusia Speedway Park in Barberville, Fla. It was his fourth career triumph overall on the national tour.

“This was our first time here and it couldn’t have gone any better,” said Smith, who earned $10,050 for becoming the 11th different winner in 26 WoO LMS A-Mains this season. “We unloaded pretty fast, set fast time, won the heat, drew the pole and won the feature. That’s a great night.”

Smith pulled off just the second complete sweep of a WoO show in 2011, joining his chassis builder Scott Bloomquist of Mooresburg, Tenn., who accomplished the hat trick on June 24 in the second Firecracker 100 preliminary program at Lernerville Speedway in Sarver, Pa.

Richards, who reached fifth on a lap-39 restart when he slipped underneath Shane Clanton of Fayetteville, Ga., fell short of a series-record-tying fourth consecutive win but pulled within striking distance of points leader Rick Eckert of York, Pa. Eckert’s season-worst 16th-place finish allowed Richards to slice his deficit in the standings from 50 to 28 points with nine events remaining on the ’11 schedule.

Eckert experienced a rare off night on the ’11 tour, qualifying through a consolation race for the first time since March 19 at Columbus (Miss.) Speedway and finding himself a lap down to Smith on lap 12. A caution flag on lap 13 put him back on the lead lap thanks to the ‘Outlaw Pardon,’ but he was unable to take advantage of the break; after stopping on the track to bring out a caution on lap 23 and then pitting, he ran quietly at the back end of the top 20 and needed the final-lap miscue of Watertown, N.Y.’s Tim McCreadie, who slid off the track in turn four and relinquished 11th place, to salvage 16th.

Smith, who parked alongside Eckert — a fellow member of Bloomquist Race Car campaigners — in the pit area, had no such problems. He built leads of as much as three secondsover Erb during the 50-lapper before ultimately crossing the finish line with an 0.878 of a second margin.

“I didn’t really know what anyone else had for tires, so I was trying to conserve yet still set a good pace,” said Smith, who kicked off his 2011 season with back-to-back runner-up finishes in February’s WoO events at Volusia. “When I got to (lapped) traffic I thought I was getting through it pretty good, but some yellows certainly didn’t hurt me. They got me open track again.

“Everything worked out for us,” he continued. “With the way we’ve been running our program this year we’re not hitting the road as much as we were and the $10,000 wins are hard to come by. It’s been too long since we’ve had one, so we’re happy to be in World of Outlaws Victory Lane. It’s definitely an honor.”

Erb, 38, was unable to pull his Bloomquist machine close enough to threaten Smith.

“I thought I was gonna start closing on him a little bit when we got into lapped traffic, but then a caution came out and opened it up a little bit again,” said Erb, who recorded his best finish in seven WoO starts this season. “He rolled around there good when he got out in open track. I knew my tires were giving out at the end, so I was just holding on for second.”

Clanton settled for a sixth-place finish after hustling from the ninth starting spot to fifth by lap 24. Eighth-starter Chub Frank of Bear Lake, Pa., climbed as high as fifth before slipping back to seventh at the checkered flag, while Vic Coffey of Caledonia, N.Y., placed eighth to move past Tim Fuller of Watertown, N.Y., for ninth in the WoO LMS points standings; Austin Hubbard of Seaford, Del., finished ninth; and Jeep VanWormer of Pinconning, Mich., who started his career racing Street Stocks at Merritt, rounded out the top 10.

Four caution flags slowed the event, which was run before a near-capacity crowd despite a threat of rain during the afternoon.

Richards kicked off the program with a victory in the 10-lap Merritt Raceway Race of Champions, a special event reserved for former WoO and Michigan Dirt Late Model champions. He drew the pole position and led the entire distance, beating Lanigan to the checkered flag for a $1,000 bonus.

The series is idle until Labor Day weekend when it visits Tyler County Speedway in Middlebourne, W.Va., on Sept. 3 for the Black Diamond 125 and Roaring Knob Motorsports Complex in Markleysburg, Pa., on Sept. 4.