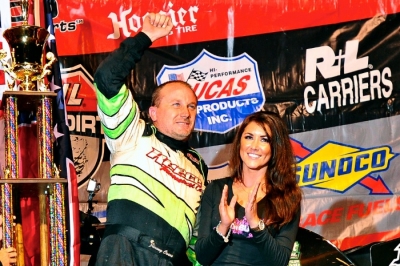 The 39-year-old driver from Newport, Tenn., took the lead from Lucas Oil Late Model Dirt Series rival Scott Bloomquist of Mooresburg, Tenn., on the 75th lap at the 29th annual Sunoco Race Fuels North-South 100 and raced to his third $50,000 victory at the half-mile oval in northern Kentucky. | Complete North-South 100 coverage

"I'll tell you what, it's like a dream come true I guess," said Owens, who has back-to-back victories in the event and three North-South 100 trophies in five seasons. "They fired off, and the car was pretty good from the get-go. Scott and those guys kind of checked out a little bit, and I was a little worried about that. But the longer the race got, the better the car got. And we were able to reel Scott in and the cautions helped us. Just everything played into our favor this weekend."

Besides stretching his series points lead, Owens joins the late Jack Boggs of Grayson, Ky., as the only three-time winner of the event that draws among the toughest fields in Dirt Late Model racing.

Bloomquist, who took the lead from polesitter Don O'Neal of Martinsville, Ind., on the 23rd lap, settled for second spot in a race he's won twice, holding off a late charge from 16th-starting Brad Neat of Dunnville, Ky. Ray Cook of Brasstown, N.C., rallied from 18th to finish fourth and Mike Marlar of Winfield, Tenn., rounded out the top five in a race delayed a few hours by an early evening rainstorm. O'Neal eventually faded, finishing 11th.

Leading at Florence in the final laps has been fateful the past two Augusts, but Owens stretched his margin to a half-straightaway at the checkers to secure the victory. He knows leading is tricky at a dry-slick oval that typically allows racing on multiple grooves.

"I drew the (sixth starting spot), and I was kind of relieved. Because I didn't want to be on the front row because you're just a sitting duck out there," Owens said. "The track's such a good track, and you can run everywhere. And when you're leading you're basically just a sitting duck."

It was Bloomquist who was a sitting duck after Owens, who ran fourth for nearly 40 laps, moved into second over a three-lap stretch and tried to cut into Bloomquist's straightaway lead.

A lap-67 yellow erased Bloomquist's margin, and Owens went to work on a leader he felt was vulnerable after getting a visual on his tires during caution periods.

"We had a couple of restarts and I seen he'd sealed his left rear tire over," Owens said. "I hadn't seen anybody up top yet, and I was tired of running around the bottom. So I just said to heck with it, it worked last year, let's try it again."

Owens moved to the high side to challenge Bloomquist, but when the leader edged up exiting turn two, his pursuer shot to the inside and won a drag-race down the backstretch to take command.

"I didn't want him to hear me up there and move up in my lane. It worked out just a little bit. He moved up just enough, but not high enough, and that left the bottom open to get around him there," said Owens, who drives a Bloomquist-designed car.

Bloomquist felt like his own Bloomquist Race Car was equal to Owens but believed better-performing tires made the difference.

"My car took off way better than his ... and then the tires felt like they gave up a little bit," Bloomquist said, who used the same tire compounds as the winner.

"I felt like mine did slow down some, and then when the caution came out, one caution won't bring your tire back. And then we got another (yellow) and then I was racing him again. It looked like I might have another shot of getting back by him, and then (the tire) started giving up again.

"All in all we're happy, proud of him for winning, and we're glad to finish second ... congratulations to him."

Neat made a stirring rally from the eighth row while Cook charged into contention from the ninth row, but both of them realized the difficulty of catching Owens, who dazzled fans and competitors alike in his heat race by rallying for a victory after a near-spin on the first lap dropped him to fifth.

"That guy right there never ceases to amaze me," Neat said. "He did a great job. ... I watched that heat race there, and I told my brother (Dustin), I said he'll be a tough cat to clean tonight, and sure enough, he won. Congratulations to them. They did a good job."

Said Cook: "I think Jimmy's just playing with everybody to be honest with you. I think he just, the way they talked, rode behind Scott until it was time to collect the check, and then went on."

Neat made up most of his ground during the 58-lap stretch of green-flag racing before the lap-67 yellow, but his car didn't fire as well as his competitors on a series of three restarts over the next nine circuits.

"There at the end, we got under Scott a time or two, but the guy that won should've won. He was better than everybody else," Neat said. "Whenever you come here, everybody knows what you're going to get in this feature. You've gotta be able to be maneuverable and that's what we work for before we start. We don't always hit it, but tonight it worked out that way.

The feature was slowed by four cautions, the most serious when eighth-running Chris Madden got into the turn-one wall, collecting Jared Landers and Kent Robinson.

The other three yellows: Steve Casebolt slowed with a broken left-front lower-control arm on the ninth lap; John Blankenship slowed in turn two on the 67th lap; and Frank Heckenast Jr. spun alone on lap 76 in turn two.