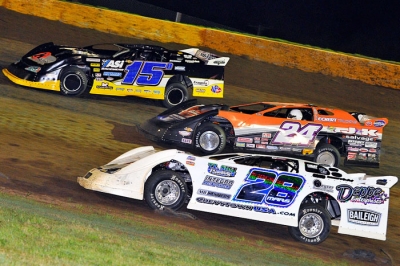 NEW RICHMOND, Wis. (Aug. 4) – Even with an injured shoulder, Brian Birkhofer had a leg up on the rest of the competition in Thursday night’s Dart Corn Belt Clash Late Model Series event at Cedar Lake Speedway.

Birkhofer, who injured his right shoulder in a scooter accident earlier in the week, didn’t let the injury slow him down on his way to dominating the 50-lap race. The Muscatine, Iowa, driver picked up $5,000 for winning the event, which serves as a precursor for the weekend’s $50,000-to-win 24th annual USA Nationals at the 3/8-mile racetrack. | Complete USA Nationals coverage

After starting from the outside of the front row, Birkhofer turned back challenges from polesitter Jimmy Mars of Menomonie, Wis., and Rick Eckert of York, Pa., during the early portions of the race and later opened up a comfortable lead following the race’s second of two restarts on lap 10.

With his torrid pace putting him in heavy traffic throughout the second half of the race, Birkhofer had to survive a few close calls that included contact with the slower car of Jill George of Cedar Falls, Iowa. The incident left sheet metal dangerously close to Birkhofer’s right-rear tire, but it never slowed him down as he went on to win by more than a straightaway advantage.

“Driving I really didn’t have a problem (due to the shoulder injury). If I wasn’t any good, it wouldn’t be because of that,” said Birkhofer, who after winning joked that his competitors took it easy on him because of his injury. “If they’re feeling sorry for me or something and give me that (victory), they can go ahead and give it to me again Saturday night.”

With an extra zero added to paycheck given to the winner of Saturday’s World of Outlaws Late Model Series sanctioned event, Birkhofer likely won’t receive any help from his competitors in neither Friday night’s prelims nor Saturday’s feature. Even so, his strong run Thursday has him optimistic about his chances of claiming his third USA Nationals victory.

“I definitely think we can beat them. I’m not gonna be arrogant and say we’re gonna win, but I’m gonna do everything in my power to win it Saturday night,” said Birkhofer, who benefited from Thursday’s event format that determined heat race lineups based on a pill draw instead of time trials. “I’m fortunate I drew good and started on the front row of my heat and the dash. I feel lucky I won because I don’t think our car’s good enough to pass and get where we were. I need to be better on Saturday night to win, I think.”

While luck may have helped put him in position to score the victory, it was also made possible by a unique line Birkhofer used throughout the feature. While the majority of the field ran either the middle or low grooves around the speedway, Birkhofer ran a bit higher on the racetrack and made it work to his advantage.

“I end up running that line a lot here,” Birkhofer said. “I’ve never really been good on the bottom. I don’t feel like I get in snug enough to run off the bottom, so I end up running this messed up momentum line. It’s made me money here and I’ve been successful at times.

“Honestly, I think that’s the line I’ll probably have Saturday night. I just want my car to have more traction (exiting turns) two and four. It’s closer than it was at the start of tonight, but it needs to be better.”

Competing at one of his home tracks, Mars, who along with Birkhofer builds the MB Customs Race Cars utilized by both drivers, gave Birkhofer his most serious challenge following a lap-seven restart. He briefly pulled ahead for the lead as the two drivers raced down the back straightaway, but Birkhofer moved back out front by the time they made it back around to the flag stand.

Mars later slipped back to third as Eckert made a bid to move to the front, but Mars retook the second position midway through and held it to the finish. Eckert followed Mars across the line in third while Clint Smith of Senoia, Ga., held off Chris Simpson of Oxford, Iowa, in a close battle to finish fourth. Simpson settled for fifth.

Notes: Birkhofer's MB Customs Race Car has a Pro Power Engine and sponsorship from J&J Steel, Zens Flooring, ASi Raceway and VP Fuels. ... Birkhofer’s two USA Nationals victories came in 2004 and 2007. The wins were part of a streak of nine consecutive top-five finishes in the event for Birkhofer that lasted from 2001 until he finished 18th in last year’s USA Nationals feature. ... Birkhofer’s victory guarantees him a starting spot in Saturday’s USA Nationals feature. ... Twenty-two of the race’s 26 starters finished the race with 14 cars on the lead lap. ... The race’s first caution was caused when Vic Coffey of Caledonia, N.Y., slowed in turn two, and Billy Moyer of Batesville, Ark., slowed to bring out the second caution. ... Defending Corn Belt Clash champion and current points leader Chad Simpson of Mount Vernon, Iowa, finished one spot behind his younger brother Chris in the sixth position. ... While Thursday’s heat race lineups were set by a pill draw, Friday’s USA Nationals prelims will include time trials to determine the heat race starting orders. ... DirtonDirt.com is providing a live pay-per-view broadcast from Cedar Lake all weekend. Purchase your package by clicking here. Semi-live blog-style updates will also be provided throughout the event.