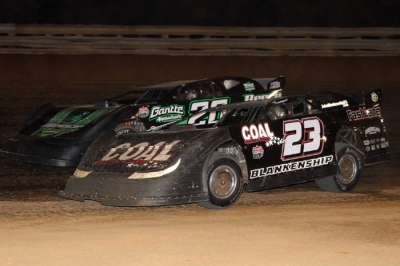 The maiden victory didn’t come easy for the 30-year-old Blankenship. After failing to record a qualifying time during time trials due to suspension issues, Blankenship won a consolation race to make the feature lineup and advanced from his 17th starting position in the main event to score the $10,000 triumph.

“I’ve been trying to win one of these for three years now. I hope it’s not the only time this year,” said Blankenship, who has followed the Lucas Oil Series full time since winning the tour’s Rookie of the Year honors in 2009.

The victory follows the pair of second-place efforts, which came at Lucas Oil Speedway in Wheatland, Mo., one week ago and Fonda (N.Y.) Speedway Thursday night, as well as a disappointing 24th-place finish in the tour’s most recent event at Utica-Rome Speedway in Vernon, N.Y., Friday.

"After all the trouble we had at Utica-Rome the other night, and the way it started off tonight, I never dreamed we would end up in victory lane,” Blankenship said. “The track was great tonight, I have to thank American Racer Tires. I have waited for three years for this moment and it sure feels good to finally win a Lucas Oil Series race."

Not deterred by his poor starting position, Blankenship methodically worked his way forward on the fast half-mile oval and overtook polesitter Jared Landers of Batesville, Ark., for the lead on lap 29. Blankenship controlled the remainder of the event as he pulled to nearly a half-second margin over series points leader Jimmy Owens of Newport, Tenn., who finished second.

Austin Hubbard of Seaford, Del., finished third followed by Earl Pearson Jr. of Jacksonville, Fla., who rallied from his 13th-starting position to score his third consecutive top-five finish. Jamie Lathroum of Mechanicsville, Md., also made a strong run forward, driving from 15th to fifth at the finish. Landers fell out of the race with just four laps remaining and ended up 20th.

"Tonight, I thought we would have trouble making the feature after what happened in time trials,” Blankenship said. “The bolt came out of a shock and we didn't get to time a lap. We won the consi to make the show. We have had a great car the last four races, I wish I had a shot at Jimmy (Owens) at Fonda, but Jimmy was awfully good up there,"

Landers, in his first ever appearance at Hagerstown, was in complete control during the early portions of the race as he built a huge lead over Owens and the rest of the field. But the complexion of the race changed following a lap-18 caution that appeared when fourth-starting Scott Bloomquist of Mooresburg, Tenn., stopped on the track in turn four.

The caution allowed Blankenship, who had worked his way into the top five, to make his move to the front. He passed Owens for second on lap 25 and then ran side-by side with Landers until nosing ahead on lap 29. Blankenship then continued a quick pace as he pulled to a comfortable advantage.

Owens also moved by Landers for second on lap 36, but couldn’t close the gap on the leader as Blankenship cruised to the victory.

Notes: Blankenship’s Rocket Chassis is powered by a Cornett Racing Engine with sponsorship from Coal America's Energy, XCoal resources, Todd Case Trucking, Fast Lane Convenience Stores and Todd Case Trucking. ... Blankenship’s previous biggest victory came in a $7,000-to-win race. ... Owens’s extended his points lead to 140 points over Bloomquist with his runner-up effort. ... Bloomquist changed tires just before the start of the race, but was a non-factor as he faded outside of the top ten early. After pitting under the lap-18 caution, Bloomquist was late rejoining the field and stopped on backstretch in to bring out another caution. Per series rules, Bloomquist was sent to his pit for the remainder of the race. ... Up next on the tour’s schedule is the 29th annual Sunoco Race Fuels North-South 100 Presented by Lucas Oil Products at Florence Speedway in Union, Ky., on Aug. 11-13. The event pays $50,000 to the winner.