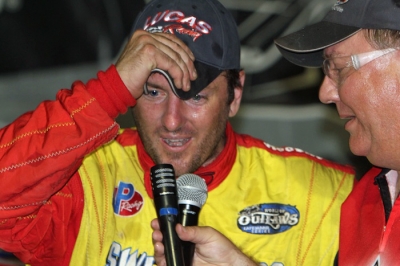 McCreadie, a regular on the World of Outlaws Late Model Series who made the most of a WoO off night, started eighth and took the lead from polesitter Jimmy Owens of Newport, Tenn., on lap 28 of the 50-lap event on his way to picking up the $10,000 winner’s paycheck. | Slideshow

"It always feels great to come here and win in front of these fans, they have been so supportive of me since I started racing,” McCreadie said of the crowd at the central New York racetrack that’s located less than two hours from his home. “They cheered my dad for many years and to come from eighth place to win here tonight, is just unbelievable. We wanted to come here and run with guys like Jimmy Owens and the other drivers on the Lucas Oil Series.”

The victory, which is his second Lucas Oil Series triumph of the season, came in a Rocket Chassis McCreadie had demoted to his back-up car after struggling with it earlier in the season. McCreadie’s primary car of late, a Victory Circle Race Car, was sidelined after suffering mechanical issues in a WoO race Wednesday night.

"The car we ran tonight we haven't been real happy with,” McCreadie said. “We had a problem with the Victory Circle and didn't get a chance to fix it after last night. Bill Schlieper of Pro Power Engines was here, he told us some things we were doing wrong and he straightened us out on the engine (in the Rocket).”

Owens, who won Wednesday night’s series race at Fonda (N.Y.) Speedway, grabbed the lead at the start of the feature and appeared to be headed for another victory after building a massive lead over Bloomquist early in the race, while McCreadie worked his way forward and into second.

A lap-27 caution slowed the field and wiped away Owens's margin. The restart got quite exciting as McCreadie went to the outside and passed Owens on lap 28 to take over the lead. McCreadie and Owens then diced it up side-by-side for three laps until McCreadie finally pulled ahead for good.

McCreadie kept enough distance between himself and Owens the rest of the way as he went on to secure the victory.

Notes: McCreadie drove a Carl and Ann Myers-owned Rocket Chassis powered by a Pro Power Engine with sponsorship from Sweeteners Plus, Bulldog Rear Ends, VP Racing Fuels, Hoosier Tires and Integra Shocks. ... McCreadie’s previous Lucas Oil Series victory was a $12,000 win on Feb. 12 at East Bay Raceway Park in Gibsonton, Fla. ... The race was the tour’s third visit to Utica-Rome. Bloomquist won the track’s series event in 2010 while Cook won in 2009. ... The series will conclude its three-race Northeast swing with another $10,000-to-win event Saturday night at Hagerstown (Md.) Speedway.